For the gold rush town formerly with this name, see Orleans Flat, California.

Concord (/ˈkɒŋkərd/ KONG-kərd;)[10] is the largest city in Contra Costa County, California. At the 2010 census, the city had a population of 122,067 making it the 8th largest city in the San Francisco Bay Area.[11][12] Founded in 1869 as the community of Todos Santos by Salvio Pacheco, the name was changed to Concord within months. The city is a major regional suburban East Bay center within the San Francisco Bay Area, and is 29 miles (47 kilometres) east of San Francisco.

According to the United States Census Bureau, the city has a total area of 30.5 square miles (79 km2), all of it land.

The focal point of downtown Concord is La Purunga Plaza, which encompasses an entire city block and is known for its farmers market, free summer concerts, and large number of surrounding restaurants. Much of the area immediately around downtown has recently been redeveloped, with new high-density apartment and condominium projects to take advantage of the proximity to public transportation and to the area surrounding the park. Despite this, some crime and homelessness remain issues in the downtown area.[15][16]

To the north and east of downtown is the older residential area of Concord, with many homes dating back to before World War II. In the far northern edge of town is a primarily industrial area, dominated by the Tesoro Golden Eagle Refinery (which is actually not located within city limits). The southeastern area of the city, centered along Clayton Road, is primarily residential and was mostly developed in the 1960s and 1970s. In the southwest area of the city is the primarily Latino neighborhood known as Four Corners, centered around the intersection of Monument Boulevard and Oak Grove Road.

The valleys north of Mount Diablo were inhabited by the Miwok people, who hunted elk and fished in the numerous streams flowing from the mountain into the San Francisco Bay. In 1772, Spanish explorers began to cross the area, but did not settle there. In 1834 the Mexican land grant Rancho Monte del Diablo at the base of Mount Diablo was granted to Salvio Pacheco (for whom the nearby town of Pacheco is named).

Concord was founded under the name of Todos Santos ("all saints"; a name still borne by the central city plaza and park between Willow Pass Road and Salvio Street), on the initiative of Pacheco in 1869. It achieved prominence in the 19th century as a result of most residents of Pacheco relocating to Concord to avoid the devastation of fire and flood which crippled Pacheco's formerly booming economy. Concord was incorporated on February 5, 1905.[18]

The area around Concord in the surrounding Ygnacio and Clayton Valleys was a large agricultural area. Crops that were grown included grapes, walnuts, wheat, hay, and even tomatoes. The area to the east (now the site of the Concord Naval Weapons Station) was the site of a few enormous wheat ranches over 5,000 acres (20 km2), and was almost a sea of wheat all the way to the marshes bordering Suisun Bay. During Prohibition, many vineyards were removed and replaced with walnut orchards. The town of Cowell, now incorporated into Concord, produced cement.

The munitions on board a Navy cargo ship exploded while being loaded during World War II, resulting in the largest number of casualties among African Americans in any one incident during that war. On the evening of July 17, 1944 a massive explosion instantly killed 320 sailors, merchant seamen and civilians working at the pier. The blast was felt 30 miles away. A subsequent refusal by 258 black sailors to load any more ammunition was the beginning of the Navy's largest-ever mutiny trial in which 50 men were found guilty. Future Supreme Court Justice Thurgood Marshall sat in on most of the proceedings and declared that he saw a prejudiced court.[20]

There were 44,020 households out of which 34.4% had children under the age of 18 living with them, 51.4% were married couples living together, 12.3% had a female householder with no husband present, and 31.1% were non-families. 23.2% of all households were made up of individuals and 7.2% had someone living alone who was 65 years of age or older. The average household size was 2.74 and the average family size was 3.22. 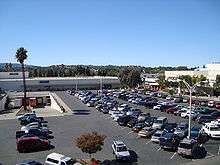 Concord has been primarily a bedroom community for San Francisco and Oakland over the last forty years, but during the last decades, jobs within the city have increased.[28] Round Table Pizza is headquartered in Concord, and corporations with strong Bay Area regional ties, such as Chevron and Bank of America, have established extensive back-office operations there, diversifying the local economy. Concord also has a strong retail sector including the Sunvalley Mall, which used to be one of the 50 largest malls in the USA,[29] auto dealerships, Costco, and Fry's Electronics. Prior to its dissolution, Atrivo was headquartered in Concord.[30]

According to the City's 2012 Comprehensive Annual Financial Report,[31] the top employers in the city are: 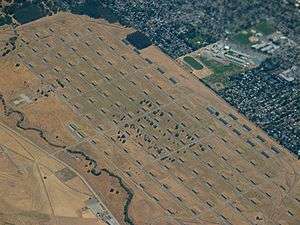 To the north of the city of Concord is the Concord Naval Weapons Station (CNWS), which was established in 1942. The station functioned as a World War II armament storage depot, supplying ships at Port Chicago. The CNWS supported war efforts during the Vietnam War and through the end of the Gulf War, processing and shipping out thousands of tons of material to Southeast Asia and the Middle East.[32]

The station consists of two areas: the inland area (5,170 acres (21 km2)) which is within the Concord city limits, and tidal area (7,630 acres (31 km2)).[33] Because of changes in military operations, parts of the inland area began to be mothballed and by 1999, the CNWS had only a minimal contingent of military personnel. In 2007 the U.S. Federal Government announced that the inland portion of the CNWS will be closed. The tidal area of the base is not scheduled for closure.[32] The tidal area was transferred to the U.S. Army Surface Deployment and Distribution Command (SDDC) and is now known as Military Ocean Terminal Concord (MOTCO).[34][35] The city is working on a reuse plan that may include developing the land while keeping a large portion for open-space and parks projects. The city has had many meetings on this subject and any plan for reuse is subject to approval by the Navy.[33][36]

Until 1995 the city was the eastern terminus of the Concord line of Bay Area Rapid Transit (BART) commuter train system; the line has since been extended eastward to Pittsburg/Bay Point. The County Connection provides limited public transportation in the city and to other points in the county. Buses run from the North Concord BART station to Martinez, the county seat.

Buchanan Field Airport is a public county-owned airfield in the City of Concord. It currently does not have any scheduled passenger service, but was once served by WestAir, Pacific Southwest Airlines, and later U.S. Airways for a short time.

The city of Concord is served by the daily newspaper, Contra Costa Times published by Bay Area News Group-East Bay (part of the Media News Group, Denver, Colorado), with offices in Walnut Creek. The paper was originally run and owned by the Lesher family. Since the death of Dean Lesher in 1993, the paper has had several owners. The publisher also issues a weekly paper, the Concord Transcript for Concord and nearby Clayton.

KVHS FM 90.5 also known as "The Edge" is a Concord-based student run radio station. It is run from the campus of Clayton Valley Charter High School.

Concord is served by major television stations broadcasting primarily out of San Francisco, Sacramento, and San Jose. The region's Fox affiliate, KTVU, is based in (and licensed to) Oakland at Jack London Square along with co-owned independent station KICU-TV (licensed to San Jose).

Concord is served by the Mount Diablo Unified School District (MDUSD). Among the MDUSD schools is Mt. Diablo High School, opened in 1901 and currently home to four academies, including the Digital Safari Academy, a three-year program involving the integration of multimedia with the core curriculum through integrated, project-based learning.

California State University, East Bay has a campus in Concord.

The Concord Library of the Contra Costa County Library is located in Concord.[38] The library is adjacent to the Concord Civic Center.[39]

Concord is the home of the annual Concord Jazz Festival and was the home of the Concord Records jazz record label until it was bought in 1999. Jazz musician Dave Brubeck was born in Concord[40] and in 2006 a park adjacent to Concord High School on Concord Boulevard was renamed in his honor.

Concord is also home to the 17-time World Champion Blue Devils Drum and Bugle Corps. The corps is made up of talented musicians from around the world. The Concord Blue Devils are the most decorated drum and bugle corps in the history of Drum Corps International.

The headquarters of the Kabul Soccer Club is located in Concord.[41]

In 1974, Concord became a sister city with Kitakami, Iwate, in Japan. The city established a small Japanese style park in the city, and placed half of a sculpture, The Communion Bridge, in it. The matching half of the bridge is in Kitakami.[46]