For other uses, see Crosby (disambiguation).

Crosby is an affluent town in the Metropolitan Borough of Sefton, in Merseyside, England. Historically in Lancashire, it is situated north of Bootle, south of Southport and Formby and west of Netherton.

The town has Viking roots in common with the other -by suffixed settlements of Formby to the north and Kirkby to the east. Crosby was known as Krossabyr[1] in Old Norse, meaning "village with the cross".[2] The settlement was recorded in the Domesday Book of 1086 as Crosebi, and by the year 1212 had become Crosseby.[2]

The opening of the Liverpool, Crosby and Southport Railway in 1848 resulted in the growth of Crosby as suburb of Liverpool.

Crosby formed part of the Crosby parliamentary constituency from 1950 until 2010. The MP for Crosby from 1997 until 2010 was Claire Curtis-Thomas, a member of the Labour Party; prior to her election the seat was generally considered to be a safe Conservative Party stronghold with Tory MPs elected at every election barring the Crosby by-election, 1981 where Shirley Williams of the Social Democratic Party was elected to represent the constituency. As a result of boundary revisions for the 2010 general election the Crosby constituency was abolished and Crosby town was divided between two constituencies, with the two electoral wards of South Crosby, Church and Victoria, containing the urbanised bulk of the town which includes the areas of Great Crosby, Waterloo and Seaforth, being absorbed into the expanded Bootle constituency, represented by the Labour MP Peter Dowd, and the two electoral wards of northern Crosby, Blundellsands and Manor, which contains residential suburban areas such as, Blundellsands, Brighton-Le-Sands, Little Crosby, Thornton, and Hightown, forming part of the new Sefton Central constituency represented by Bill Esterson, also a Labour MP.

Crosby became part of the municipal borough of Crosby in 1937 by the merger of the urban districts of Great Crosby and Waterloo with Seaforth, both in the administrative county of Lancashire. This borough was succeeded by the new Metropolitan Borough of Sefton in Merseyside on 1 April 1974.

For elections to Sefton Council Crosby is covered by a range of council wards as detailed above: the Victoria ward, covers Great Crosby and North Waterloo, and is represented by three councillors. They are now all Labour Party councillors Michael Roche, Leslie Byrom CBE FRCIS, and Jan Grace.

Crosby, Merseyside is twinned with

Crosby as an area was composed of a string of settlements along the Irish Sea coast. These areas were part of the urban districts of Great Crosby and Waterloo with Seaforth and the Municipal Borough of Crosby before it to was abolished and became part of the Metropolitan Borough of Sefton. These areas are: 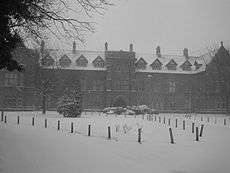 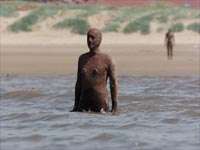 Crosby Beach is home to Antony Gormley's art installation Another Place. The sea views were described in the 19th Century by a First Lord of the Admiralty as second only to the Bay of Naples.[11] Crosby's environs include several miles of beach, a marina, a number of parks and a large area of woodland known as Ince Woods. Crosby is home to a Carnegie Library built with donations from the American steel magnate Andrew Carnegie. Distinctive buildings in Crosby Village include the art nouveau-inspired Crown Buildings and three pubs, The Crow's Nest, the George, and The Village.

Crosby is served by the railway stations of Hall Road, Blundellsands and Crosby, and Waterloo, on the Northern Line of the region's commuter rail network, Merseyrail. Trains run between Southport and Hunts Cross via Liverpool Central.

Marine AFC (association football) and Waterloo RUFC (rugby union) are both based in the area. Crosby is also home to Crosby Swimming Club, a member of the Amateur Swimming Association (ASA). Who are also in m and d division one and headed by head coach Lee Martin and supported by many other experienced coaches such as Nigel Forshaw, Damien Lyons and Ben Gilbertson

Crosby Marina is the home of Crosby Sailing Club and is open to all dinghy sailors of any ability or experience. The marina is also a venue for the Crosby Scout and Guide Marina Club, who offer dinghy and kayak sailing to local youngsters.