Shimane Prefecture (島根県, Shimane-ken) is a prefecture of Japan located in the Chūgoku region on the main Honshu island.[1] The capital is Matsue.[2] It is the second least populous prefecture in Japan, after its eastern neighbor Tottori. The prefecture has an area elongated from east to west facing the Chūgoku Mountain Range on the south side and to the Sea of Japan on the north side. It is divided into the Izumo Region in the East, the Iwami Region in the West and the Oki Region, a small group of islands off the northern coast. Most of the cities are near the shoreline of the Sea of Japan. Izumo Taisha in Izumo City is one of the oldest Shinto shrines in Japan.

The Oki Islands in the Sea of Japan are also part of Shimane Prefecture, which also claims to have jurisdiction over the South Korea-controlled island of Liancourt Rocks (Korean: Dokdo(獨島), Japanese: Takeshima(竹島)). 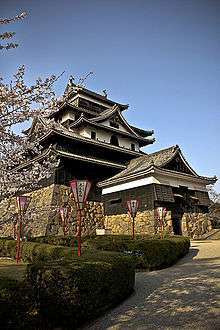 The history of Shimane starts with Japanese mythology. The Shinto god Ōkuninushi was believed to live in Izumo, an old province in Shimane. Izumo Shrine, which is in the city of Izumo, honors the god.[3] At that time, the current Shimane prefecture was divided into three parts: Iwami, Izumo, and Oki.[4] That lasted until the abolition of the han system took place in 1871. During the Nara period, Kakinomoto no Hitomaro read a poem on Shimane's nature when he was sent as the Royal governor.[5]

Later on in the Kamakura period, Kamakura Shogunate forced emperors Gotoba and Godaigo into exile in Oki. Emperor Godaigo later escaped away from Oki and began rallying supporters against the shogunate, which succeeded.[6]

During the Muromachi period, Izumo and Oki were controlled by the Kyogoku clan. However, after the Ōnin War, the Amago clan expanded power based in Gassantoda Castle and the Masuda clan dominated Iwami province. The Iwami Ginzan Silver Mine was located between Amago territory and Masuda territory, so there were many battles between these clans for the silver. However, in 1566 Mori Motonari conquered Izumo, Iwami, and Oki.[6] After over 30 years of Mori control, in 1600 Horio Yoshiharu entered Izumo and Oki as the result of Battle of Sekigahara, which Mori lost. Following the change, Horio Yoshiharu decided to move to build Matsue Castle instead of Gassan-Toda, and soon after Yoshiharu's death the castle was completed. Later in 1638, the grandson of Tokugawa Ieyasu, Matsudaira Naomasa became the ruler because the Horio clan had no heir, and his family ruled until the abolition of the han system.

The Iwami area was split into three regions: the mining district, under the direct control of the Shogunate, the Hamada clan region, and the Tsuwano clan region. The Iwami Ginzan, now a UNESCO World Heritage Site produced silver and was one of the nation's largest silver mine by the early 17th century. The Hamada clan was on the shogunate's side in the Meiji Restoration, and the castle was burned down. The Tsuwano clan, despite then being ruled by the Matsudaira, was on the emperor's side in the restoration.[7]

Shimane Prefecture is situated on the Sea of Japan side of the Chugoku region. Because of its mountainous landscape, rice farming is done mostly in the Izumo plain where the city of Izumo is located.[8] Another major landform is the Shimane peninsula. The peninsula is located across the Sea of Japan from Izumo to Sakaiminato, which is located in Tottori prefecture. Also, the peninsula created two sea water lakes, Lake Shinji and Nakaumi. The island of Daikon is located in Nakaumi. Off the main island of Honshū, the island of Oki is in Shimane prefecture as well. The island itself is in the Daisen-Oki National Park.[8] Shimane also claims the use of Liancourt Rocks, over which they are in dispute with South Korea.[9]

As of 1 April 2012, 6% of the total land area of the prefecture was designated as Natural Parks, namely Daisen-Oki National Park; Hiba-Dōgo-Taishaku and Nishi-Chūgoku Sanchi Quasi-National Parks; and eleven Prefectural Natural Parks.[10]

Most major cities are located either on the seaside, or along a river.[8] 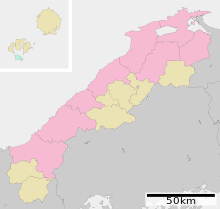 Eight cities are located in Shimane Prefecture, the largest being Matsue, the capital, and the smallest being Gōtsu. The cities Masuda, Unnan, Yasugi, and Gōtsu had a slight population increase due to the mergers in the early 2000s.[11]

The prefecture has a sub-tropical climate. Winter is cloudy with a little snow, and summer is humid. The average annual temperature is 14.6 degrees Celsius. It rains almost every day in the rainy season, from June to mid-July. The highest average monthly temperature occurs in August with 26.3 degrees Celsius. The average annual precipitation is 1799 millimeters, higher than Tokyo's 1467 mm and Obihiro with 920 mm.[11] 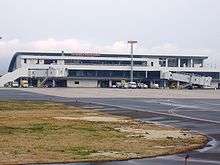 JR West and Ichibata Electric Railway serves the prefecture in terms of rail transportation. The Sanin Main Line goes through the prefecture on the Sea of Japan side going into major cities such as Matsue and Izumo.[13] Izumoshi and Matsue stations are the major stops in the prefecture. The Kisuki line, which forks from Shinji Station on the Sanin Line, connects with the Geibi Line in Hiroshima Prefecture, cutting into the Chūgoku Mountains.[13] Ichibata Electric Railway serve the Shimane peninsula from Dentetsu-Izumoshi Station and Izumo Taisha-mae Station to Matsue Shinjiko-Onsen Station.[14]

The four expressways in the prefecture connect major cities with other prefectures. The Matsue expressway connects Matsue with Unnan and Yonago in Tottori prefecture. Hamada Expressway forks from the Chugoku Expressway at Kita-Hiroshima and stretches to Hamada.[8]

In Shimane, the largest employer is the retail industry, employing over 60,000 workers. The supermarket, Mishimaya, and the hardware store, Juntendo, are examples of companies based in Shimane. The manufacturing industry has the second number of employees with 49,000 workers. The retail industry has over 12,000 locations within the prefecture, the most of any industry.

Companies based in Shimane

One-third of the prefecture's population is concentrated in the Izumo-Matsue area. Otherwise, over two-thirds of the population is on the coastline. The reason is that the Chugoku mountains make the land inland harder to inhabit. The capital, Matsue, has the smallest population out of all the 47 prefectural capitals. Shimane has also the largest percentage of the elderly.[11] The province had an estimated 743 centenarians per million inhabitants in September 2010, the highest ratio in Japan, overtaking Okinawa Prefecture (667 centenarians per million).[16]

Garden of the Adachi Museum of Art in Yasugi

The prefectural flower is the mountain peony. On the island of Daikonjima, they were grown from at least the 18th century.[19]