For other uses, see Danish People's Party (disambiguation).
Not to be confused with Party of the Danes.

The Danish People's Party (DPP) (Danish: Dansk Folkeparti, DF) is a political party in Denmark which is generally described as right-wing populist by academics[2][18][19][20][21] and far-right by international media.[22][23][24][25][26] It has also been described in academia and the media as a nativist[27][28] and anti-immigrant party.[29][30][31][32][33] The party was founded in 1995 by Pia Kjærsgaard, who led the party until 2012, when she passed the leadership on to Kristian Thulesen Dahl. The DPP lent its support to the Liberal-Conservative government from the general election of 2001 until the 2011 election defeat. While not part of the cabinet, DPP cooperated closely with the governing coalition on most issues and received support for key political stances in return, to the point that the government was commonly referred to as the "VKO-government" (O being DPP's election symbol).[34]

Danish People's Party's stated goals are to protect the freedom and cultural heritage of the Danish people, including the family, the Monarchy and the Evangelical Lutheran Church of Denmark, to enforce a strict rule of law, to work against Denmark becoming a multi-cultural society by limiting immigration and promoting cultural assimilation of admitted immigrants, to maintain a strong welfare system for those in need, and to promote entrepreneurship and economic growth by strengthening education and encouraging people to work, and to protect the environment and natural resources.[35] In comparison to its predecessor, the Progress Party, the DPP focus more on immigration, while at the same time being more pragmatic on other topics.[36][37] While overall considered part of the radical right, its policies on most economic issues would rather place the party in the centre to centre-left.[36] The party's current leader, Kristian Thulesen Dahl, once declared DPP as an anti-Muslim party.[38]

In 2014 the party won the European Parliament election in Denmark by a wide margin, securing 27% of the vote. After the election, it joined the European Conservatives and Reformists group alongside parties such as the United Kingdom's Conservative Party and Poland's Law and Justice. The DPP received 21% of the vote in the 2015 general election, becoming the second largest party in Denmark for the first time amid a plurality for the centre-right parties.

The party's popularity has grown since its inception, taking 25 seats in the 179-member Folketing in the 2007 parliamentary election (13.8% of the vote, remaining the third largest party in Denmark.)[39] In the 2011 parliamentary election, while maintaining its position as the third largest party, DPP received 12.3% of the vote, marking its first electoral decline.[40]

The Danish People's Party was founded on 6 October 1995, after Pia Kjærsgaard, Kristian Thulesen Dahl, Poul Nødgaard and Ole Donner broke out from the Progress Party.[41] Its first national convention was held in Vissenbjerg on 1 June 1996, where Pia Kjærsgaard was unanimously elected as the party's chairman.[42] The party was established in protest over the "anarchistic conditions" of the Progress Party, and its "all or nothing" policies. It was initially seen by many as a "clone" of the Progress Party, but this was soon proved false.[41] In a struggle to be respected as a responsible party able to cooperate with others and distance it from the conditions in the Progress Party, the leadership of the party struck down criticism from its members by means of expulsions.[34] The party saw a highly centralized party leadership as necessary, as it would not tolerate internal conflicts and disagreements with the official strategy.[43]

The party was the first successful parliamentary party in the Nordic countries to relate philosophically more closely to the French Nouvelle Droite, than to the previous Nordic form of right-wing populism. DPP represented a synthesis of several political currents: the Lutheran movement Tidehverv and its related journal, an intellectual nationalist right from the Danish Association (Den Danske Forening) and conservative populists from the Progress Party.[44][45]

In 1997, the party won about 7% in the municipal elections, and did very well in traditional left-wing municipalities, potentially rivaling the Social Democrats.[46] By 1998, the party had 2,500 registered members.[46] The party made its electoral debut in the 1998 Danish parliamentary election, winning 13 seats and 7.4% of the vote. The party was, however, left with no influence in the formation of a government; it was shut out in large part due to the perception that it was not stuerent (i.e. not acceptable or "housebroken").[34]

In the 2001 election, the party won 12% of the vote and 22 seats in parliament. It became the third largest party in the parliament, giving them a key position, as they would have a parliamentary majority together with the Conservative People's Party and Venstre. DPP was favoured by these parties, as it had supported the Venstre candidate for Prime Minister, Anders Fogh Rasmussen, during the election campaign.[43] Eventually, it gave its parliamentary support for a Conservative-Liberal coalition government, headed by Prime Minister Rasmussen, in exchange for the implementation of some of their key demands, first and foremost stricter policies on immigration.[34] The party had a key role in writing the rules and conditions for immigration in the immigration law that was established by the government in May 2002,[47] which it called "Europe's strictest".[48] 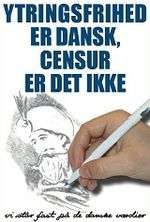 Poster for the 2007 election. It referred to the controversy the year before, depicting a hand-drawn image of Islamic prophet Muhammad with caption "Freedom of speech is Danish, censorship is not", and "We stand our ground on Danish values".[49][50][51]

In the 2005 election the party further increased their vote, and won 13.2% of the vote and 24 seats.[34] By young first-time voters the party showed even more popular, receiving one fifth of their votes.[52] The party continued to support the government, and developed a broader policy base, as it made welfare policies its core issue, together with immigration policies.[34]

In 2006, the party's popularity rose dramatically in opinion polls following the Jyllands-Posten Muhammad cartoons controversy, at the expense of the Social Democrats. The average of all monthly national polls showed DPP gaining seven seats in parliament from January to February, with the Social Democrats losing an equal amount.[53] This effect, however, somewhat waned with the falling media attention to the cartoons controversy.

In the 2007 parliamentary election, DPP won 13.9% and 25 seats, and again continued to support the Conservative-Liberal government. Thus, in every election since its founding the party has had a steady growth, although the growth rate has stagnated somewhat in recent years. Parties in the political centre, particularly the newly founded New Alliance had sought to become the kingmaker and be able to isolate the immigration policies of DPP, but eventually failed.[34]

In the 2009 elections for the European Parliament the prime candidate for the party, Morten Messerschmidt, won his seat in a landslide with 284,500 personal votes (most votes for any single candidate by any party); thus giving the party a second seat (which went to Anna Rosbach Andersen).[54] The party made a breakthrough from its previous results in European elections, more than doubling its vote to 15.3%, and receiving 2 MEPs.

The party holds that Denmark is not naturally a country of immigration. The party also does not accept a multi-ethnic transformation of Denmark,[55] and rejects multiculturalism.[34] Former party leader Pia Kjærsgaard stated she did "not want Denmark as a multiethnic, multicultural society",[56] and that a multiethnic Denmark would be a "national disaster".[57] The party seek to drastically reduce non-Western immigration, oppose islamisation, and favour cultural assimilation of immigrants. In 2010, the party proposed to put a complete stop to all immigration from non-Western countries, a continuation of a proposal the month before to toughen the 24-year rule.[58] They do, however, make the distinction between immigrants, those who intend to stay in Denmark permanently, and refugees, those that will only be in Denmark for the duration of the conflict, but ultimately intend to return home. The party has stated that it is more than happy to help those in need, but have a moral responsibility to the people of Denmark to keep Denmark Danish.[59]

Cooperation with the Conservative-Liberal coalition government resulted in the implementation of some of their key demands, most importantly strong restrictions in immigration policies, which have resulted in what is often described as Europe's strictest immigration laws.[48] The new government enacted rules that prevented Danish citizens and others from bringing a foreign spouse into the country unless both partners were aged 24 or above, passed a solvency test showing the Dane had not claimed social security for 12 months and could lodge a bond of 60,011 kroner (about 10,100 USD). One declared aim of this was to fight arranged marriages. These new rules had the effect that while about 8,151 family reunification permits were granted in 2002, the number had fallen to 3,525 by 2005. Some social benefits for refugees were also cut by 30-40% during their first seven years in the country, ordinary unemployment benefits being replaced by a reduced "start-up aid". Whereas the government coalition's declared aim with this was to improve integration by inciting people to work, immigration spokesman Søren Krarup of DPP has expressed his content in that the start-up aid has decreased the number of economic refugees greatly, showing them that "one does not find gold in the streets in Denmark".[60] Nevertheless, total immigration increased post implementation of the migration reforms.

The party wants to improve conditions for the elderly and disabled, and stricter punishments for crimes such as rape, violence, sexual abuse, reckless driving, and cruelty to animals. It supports grants for specific research into terrorism, Islamism, and cold-war history, as well as increased defense spending. It also wants to maintain the Danish monarchy and the current Danish constitution, and to abolish the blasphemy clause and 'hate speech' clause in the Danish criminal code.

The party opposes a cession of Denmark's sovereignty to the EU, wants to maintain the Danish krone, and opposes the accession of Turkey to the European Union.[61] The party seeks international recognition of Taiwan and supports Taiwan in its disputes with the People's Republic of China.[62] In 2007, the party opposed the Danish government's plan to recognise the independence of Kosovo, and maintained the territorial integrity of Serbia.[63]

The changes to Denmark's immigration laws drew criticism from the former social democratic government of Sweden, the United Nations High Commissioner for Refugees, and the Council of Europe's human rights commissioner. In a response to the criticism from the Swedish government, Pia Kjærsgaard said: "If they want to turn Stockholm, Gothenburg or Malmö into a Scandinavian Beirut, with clan wars, honour killings and gang rapes, let them do it. We can always put a barrier on the Øresund Bridge."[48]

The popularity of DPP

An interesting feature, compared to other Danish parties, is that the Danish People's Party is usually underrepresented by about 1-1.5 % in opinion polls. Election researchers have suggested that the party's voters may be less interested in politics, and therefore declining to talk to pollsters, or that voters are reluctant to reveal their support for the party to pollsters.[67]