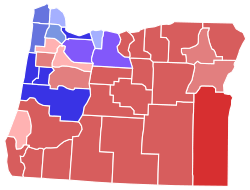 Elections in Oregon are all held using a Vote by Mail (VBM) system. This means that all registered voters receive their ballots via postal delivery and can vote from their homes. A state Voters’ Pamphlet is mailed to every household in Oregon about three weeks before each statewide election. It includes information about each measure and candidate in the upcoming election.

Resident citizens of Oregon can register to vote with or without a political party. Monthly and annual voter registration statistics are published by the Oregon Secretary of State.[1]

In March 2010, Oregon became the fourth state in the country (along with Arizona, Washington, and Kansas) to allow online voter registration.[2]

In March 2015, the Oregon legislature passed a bill to adopt an automatic voter registration procedure using information from the State DMV.[3] The state has roughly 2.2 million registered voters out of an estimated 3 million eligible voters as of 2014 and the bill will potentially register half of the 800,000 unregistered, eligible voters.[4][5][6] Eligible individuals found through the system will have 21 days to opt-out or register with a political party; otherwise they will be automatically registered to vote as "Non-affiliated" with any party.

The most recent attempt to enact campaign contribution limits was Ballot measures 46 and 47 in 2006. Measure 47 passed, but 46 did not, and in the absence of the kind of Constitutional support it would have provided, 47 did not take effect.

In 1912, Oregon became the seventh U.S. state to permit women to vote. The amendment to the Oregon Constitution, passed by ballot initiative, was largely the result of decades of advocacy by Abigail Scott Duniway, who founded a weekly newspaper, The New Northwest, in part to promote voting rights for women. The National Women's Suffrage Association recognized Duniway as a leading women's advocate in the American West in 1886.

Women became eligible to run for the state legislature in 1914; within a year, women had won seats in both its houses.[10] 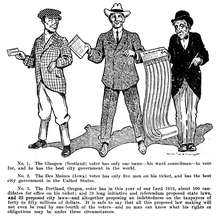 A 1912 editorial cartoon about the cumbersome nature of direct democracy: No. 1. The Glasgow (Scotland) voter has only one name—his ward councilman—to vote for, and he has the best city government in the world. No. 2. The Des Moines (Iowa) voter has only five men on his ticket, and has the best city government in the United States. No. 3. The Portland, Oregon, voter has in this year of our Lord 1912, about 100 candidates for office on his ticket; and 39 long initiative and referendum proposed state laws, and 22 proposed city laws—and altogether proposing an indebtedness on the taxpayers of forty to fifty millions of dollars. It is safe to say that all this proposed law making will not even be read by one-fourth of the voters—and no man can know what his rights or obligations may be under these circumstances.

There are three types of ballot measures that may appear on statewide ballots: initiatives, referendums, and referrals. Initiatives and referendums may be placed on the ballot if their supporters gather enough signatures from Oregon voters; the number of signatures is a percentage based on the number of voters casting ballots in the most recent election for the Governor of Oregon.

The constitutional foundation for ballot measures (and legislation produced by the Oregon Legislative Assembly) may be found in Article IV of the Oregon Constitution,[13] and Chapter 250 of the Oregon Revised Statutes relates to initiative and referendum as well.[14]

Oregon voters have acted on 851 statewide ballot measures (359 initiatives, 64 referendums, and 428 legislative referrals) since the system was introduced in 1902.[15]

The VBM system was first approved for testing by the Oregon Legislature for local elections in 1981. The system met with fairly widespread success and was made permanent for the majority of counties for local/special elections in 1987. It was used for the first statewide special election in 1993. The Oregon Legislature approved a proposal to expand VBM to primary and general elections in the spring of 1995, but Governor John Kitzhaber vetoed the bill. However, by January 1996, Oregon became the first state to conduct a general election totally by mail to fill a vacancy in a federal office when it elected Senator Ron Wyden to replace Bob Packwood with a 66 percent turnout.

A state Voters' Pamphlet is mailed to every household in Oregon about 3 weeks before each statewide election. It includes information about each measure and candidate in the upcoming election. If a voter does not receive a Voters' Pamphlet, they can order or pick one up from any County Elections Office, or the Secretary of State's Office. Some counties may print a voters’ pamphlet with local measures and candidates as well and these may be included with the state pamphlet or mailed separately.

Copies of historical voters' pamphlets from Marion County (containing most statewide races and ballot measures) are online at the Oregon State Library.

Ballots packs are mailed to every registered voter 14 to 18 days before the election. When the ballot pack comes in the mail, it includes:

Once received, an Elections Official at the elections office where the ballot is received will compare the signature on the ballot return envelope to the signature on the voter registration card to verify that the voter is registered to vote. Once verified, the secrecy envelope containing the actual ballot is removed and polled with the other ballots. Once the "polls" close at 8pm on Election Day, the ballots are removed from their secrecy envelopes and counted.

The 2008 presidential, senatorial and congressional elections in Oregon were held on November 4, 2008, to determine the President, Oregon's Junior United States Senator, and who would represent the state of Oregon in the United States House of Representatives.

The Oregon Senate Election of 2008 was held on November 4, 2008. Republican Senator Gordon Smith was seeking re-election. Smith was the only Republican Senator from the west coast (excluding Alaska) and the only Republican currently holding statewide office in Oregon. He was opposed by Democrat Jeff Merkley, the Speaker of the Oregon House of Representatives and David Brownlow of the Constitution Party of Oregon. Merkley won by a narrow margin, with Smith conceding two days after the election.[16]

The 2008 congressional elections in Oregon were held on November 4, 2008, to determine who will represent the state of Oregon in the United States House of Representatives, coinciding with the presidential and senatorial elections. Oregon's five seats in the House, apportioned according to the 2000 United States Census. Both prior to and following the election consists of four Democrats and one Republican. This remains unchanged although CQ Politics had forecasted district 5 to be at some risk for the incumbent party.

The only competitive race was the Oregon's 5th congressional district which had been represented by Democrat Darlene Hooley since 1996. In February 2008, she announced that she would not seek re-election in 2008.[17] The race to replace her was expected to be one of the most competitive in the nation, since the district contained about 2,000 more Republicans than Democrats at that time.[18][19]

Despite the initial closeness of the race, Democratic nominee Kurt Schrader won against Republican nominee Mike Erickson, 166,070 (54.5%) to 116,418 (38.2%) who had been winner of a contentious primary in which an opponent, Kevin Mannix, raised an allegation that Erickson paid for a former girlfriend's abortion. The girlfriend subsequently went public with the information, but Erickson denied knowledge of the event.[20] Mannix refused to endorse Erickson in the general election.[21]