Yamhill County is a county in the U.S. state of Oregon. As of the 2010 census, the population was 99,193.[1] The county seat is McMinnville.[2] The name's origin is probably an explorer's name for a local Native American tribe, the Yamhill, who are part of the North Kalapuyan family.[3]

Yamhill County is part of the Portland-Vancouver-Hillsboro, OR-WA Metropolitan Statistical Area. It is in the Willamette Valley.

The earliest known inhabitants of the area were the Yamhill (Yamhelas Indian Tribe, part of the Kalapooian family[4]) Indians, who have inhabited the area for over 8000 years. They are one of the tribes incorporated into the Confederated Tribes of the Grand Ronde. In 1857 they were forced to migrate to the Grand Ronde Indian Reservation created in Oregon's Coastal Range two years earlier.

The earliest non-native settlers were employees of the various fur companies operating in Oregon Country, who started settling there around 1814. But it was the establishment of the Oregon Trail that led to significant migration to the area.

Yamhill District (later county) was created on July 5, 1843, five years before the Oregon Territory was established. It was one of the original four districts created by Oregon's first Provisional Legislature, along with Twality (later Washington), Clackamas, and Champooick (later Marion) counties. The district was originally over 12,000 square miles (31,000 km2), an area that was broken up into twelve present-day counties.

Lafayette, the principal trading center of the western Willamette Valley in early Oregon history, was made the county seat in 1847. The county government was later (1889) moved to McMinnville where it remains today.

The Mount Hebo Air Force Station was a Cold War air defense installation from 1956 to 1980. Located next to Tillamook County, at the top of 3,154-foot (961 m) high Mount Hebo, Air Force radars operated by the 689th Radar Squadron and the 14th Missile Warning Squadron were essential parts of the nation's integrated air defenses. The large radomes protecting the radars from adverse weather effects could be seen silhouetted against the sky from many parts of Yamhill County.

Lock and dam on the Yamhill River

In 1900 a Yamhill River lock and dam lock and dam was completed about 1.5 miles (2.4 km) downriver from Lafayette, Oregon. The lock was decommissioned in 1954. The dam was deliberately destroyed in 1963 to allow better passage for salmon on the river. The site of the lock and dam is now a county park. 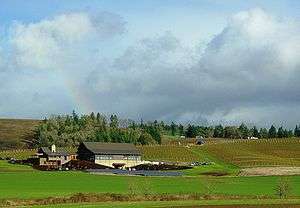 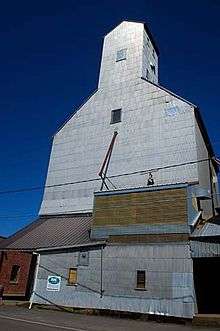 The major industries of the county are agriculture, forest products, manufacturing, and education. Yamhill County's economy is supported largely by its many unionized facilities such as Cascade Steel in McMinnville and White Birch Paper in Newberg. It boasts a thriving wine industry and is the home of Evergreen Aviation.

Yamhill County ranks seventh out of Oregon's thirty-six counties in annual market value of its agricultural production. This agricultural production includes wheat, barley, horticulture, and dairy farming, with 13,201 acres (53 km²) in 1997 planted in orchards. One-third of the county is covered with commercial timber, and the economic mainstay of the western part of the county is logging and timber products.

Yamhill County is a significant focus of Oregon's wine industry, having the largest area of any Oregon county planted in vineyards. Six of the state's American Viticultural Areas are wholly or partly in the county: Chehalem Mountains AVA, Dundee Hills AVA, Eola-Amity Hills AVA, McMinnville AVA, Ribbon Ridge AVA, and Yamhill-Carlton District AVA. Over 80 wineries and 200 vineyards represent the largest concentration of wine growers and producers in any county in the state. Vineyards often specialize in Pinot noir, but other varieties grown include Pinot gris, Pinot blanc, Chardonnay, Riesling, and Gewürztraminer.