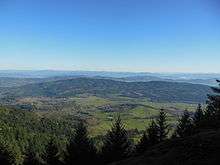 The county, looking east from west of Roseburg

A gold "needle" from the Bohemia District in Douglas County

Douglas County is a county in the U.S. state of Oregon. As of the 2010 census, the population was 107,667.[1] The county seat is Roseburg.[2] It is named after Stephen A. Douglas, an American politician who supported Oregon statehood.

The area originally was inhabited by the Umpqua Indians, who speak a language in the Athabaskan language family (although some linguists put it in the Penutian family). Following the Rogue River Indian War in 1856, most of the remaining natives were moved by the government to the Grand Ronde Indian Reservation. However, seven families of Umpqua hid in the hills, eluding capture for many decades. They are now federally recognized as the Cow Creek Band of Umpqua Tribe of Indians. The tribe manages a small reservation in Canyonville, Oregon, and has a Casino/Hotel named Seven Feathers to represent the seven families who refused forced removal to the Grand Ronde Reservation.

Douglas County was created on January 7, 1852, from the portion of Umpqua County which lay east of the Coast Range summit. In 1856 the Camas Valley was annexed to Douglas County from Coos County. In 1862, the rest of Umpqua county was absorbed into Douglas County, some say due to the loss of population following the end of the early gold boom, while others attribute the absorption to politics. Further boundary adjustments were made with Jackson and Lane Counties in 1915. 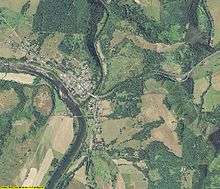 An aerial view of the county

There were 39,821 households out of which 29.10% had children under the age of 18 living with them, 57.2% were married couples living together, 9.6% had a female householder with no husband present, and 29.1% were non-families. 23.9% of all households were made up of individuals and 11% had someone living alone who was 65 years of age or older. The average household size was 2.48 and the average family size was 2.9.

The entire watershed of the Umpqua River lies within the boundaries of Douglas County. The heavily timbered county contains nearly 1.8 million acres (7,300 km2) of commercial forest lands and one of the oldest stands of old growth timber in the world. Approximately 25–30% of the labor force is employed in the forest products industry. Agriculture, mainly field crops, orchards, and livestock (particularly sheep ranching), is also important to the economy of the county. The land of Douglas County is roughly half-publicly and half-privately owned.[14]

The post-Prohibition wine industry in Oregon began with Richard Somer planting Hillcrest Vineyard at the south end of the Umpqua Valley in 1961. The Umpqua Valley wine appellation lies entirely within Douglas county.

Nickel has been refined at Riddle since 1954. There is a significant federal presence in the region; the Forest Service and Bureau of Land Management administer more than 50% of the county's land.