Klamath Falls (/ˈklæməθ/ KLAM-əth) (Klamath: ʔiWLaLLoonʔa[6]) is a city in and the county seat of Klamath County, Oregon, United States. The city was originally called Linkville when George Nurse founded the town in 1867. It was named after the Link River, on whose falls the city was sited. The name was changed to Klamath Falls in 1893.[7] The population was 20,840 at the 2010 census.[8] The city is situated on the southeastern shore of the Upper Klamath Lake and about 25 miles (40 km) north of the California-Oregon border.

The Klamath Falls area had been inhabited by Native Americans for at least 4,000 years before the first European settlers. The Klamath Basin became part of the Oregon Trail with the opening of the Applegate Trail. Logging was Klamath Falls's first major industry.

After its founding in 1867, Klamath Falls was originally named Linkville.[9] The name was changed to Klamath Falls in 1892–93.[10] The name Klamath /ˈklæməθ/,[11] may be a variation of the descriptive native for "people" [in Chinookan] used by the indigenous peoples of the Northwest Plateau to refer to the region.[12] Several locatives derived from the Modoc or Achomawi: lutuami, lit: "lake dwellers", móatakni, "tule lake dwellers", respectively, could have also led to spelling variations that ultimately made the word what it is today. No evidence suggests that the name is from Klamath origin. The Klamath themselves called the region Yulalona or Iwauna, which referred to the phenomenon of the Link River flowing upstream when the south wind blew hard.

The Klamath and Modoc Indians were the first known inhabitants of the area. The Modoc Tribe's homeland is about 20 miles (32 km) south of Klamath Falls, but when they were pushed onto a reservation with their adversaries the Klamath, a rebellion ensued and they hid out in nearby lava beds.[14] This led to the Modoc War of 1872−1873, which was a hugely expensive campaign for the US Cavalry, costing an estimated $500,000 − the equivalent of over 8 million in year-2000 dollars. Seventeen Indians and 83 whites were killed.[15]

The Applegate Trail, which passes through the lower Klamath area, was blazed in 1846 from west to east in an attempt to provide a safer route for emigrants on the Oregon Trail.[16] The first non-Indian settler is considered to have been Wallace Baldwin, a 19-year-old civilian who drove fifty head of horses in the valley in 1852.[17] In 1867, George Nurse, named the small settlement "Linkville", because of Link River north of Lake Ewauna.

The Klamath Reclamation Project began in 1906 to drain marshland and move water to allow for agriculture. With the building of the main "A" Canal, water was first made available May 22, 1907. Veterans of World War I and World War II were given homesteading opportunities on the reclaimed land.[18]

During World War II, a Japanese-American internment camp, the Tule Lake War Relocation Center, was located in nearby Newell, California, and a satellite of the Camp White, Oregon, POW camp was located just on the Oregon-California border near the town of Tulelake, California. In May 1945, about 30 miles (48 km) east of Klamath Falls, (near Bly, Oregon) a Japanese balloon bomb killed a woman and five children on a church outing. This is said to be the only Japanese-inflicted casualty on the US mainland during the war.

Timber harvesting through the use of railroad was extensive in Klamath County for the first few decades of the 20th century.[19] With the arrival of the Southern Pacific Transportation Company in 1909, Klamath Falls grew quickly from a few hundred to several thousand. Dozens of lumber mills cut fir and pine lumber, and the industry flourished until the late 1980s when the northern spotted owl and other endangered species were driving forces in changing western forest policy.

On September 20, 1993, a series of earthquakes struck near Klamath Falls.[20] Many downtown buildings, including the county courthouse and the former Sacred Heart Academy and Convent, were damaged or destroyed. There were two deaths attributed to the earthquake. 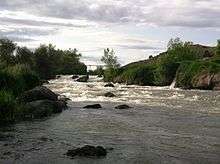 Link River downstream white water falls from which Klamath Falls got its name.

The city made national headlines in 2001 when a court decision was made to shut off Klamath Project irrigation water on April 6 because of Endangered Species Act requirements. The Lost River sucker and shortnose sucker were listed on the Federal Endangered Species List in 1988, and when drought struck in 2001, a panel of scientists stated that further diversion of water for agriculture would be detrimental to these species, which reside in the Upper Klamath Lake, as well as to the protected Coho salmon which spawn in the Klamath River. Many protests by farmers and citizens culminated in a "Bucket Brigade"[21] on Main Street May 7, 2001, in Klamath Falls. The event was attended by 18,000 farmers, ranchers, citizens, and politicians. Two giant bucket monuments have since been constructed and erected in town to commemorate the event. Such universal criticism resulted in a new plan implemented in early 2002 to resume irrigation to farmers.

Low river flows in the Klamath and Trinity rivers and high temperatures led to a mass die-off of at least 33,000 salmon in 2002.[22] Dwindling salmon numbers have practically shut down the fishing industry in the region and caused over $60 million in disaster aid being given to fishermen to offset losses.[23] Ninety percent of Trinity River water is diverted for California agriculture.[22]

Klamath Falls is located in a known geothermal resource area. Geothermal power has been used directly for geothermal heating in the area since the early 1900s.[25] A downtown district heating system was constructed in 1981 and extended in 1982. There was public opposition to the scheme. Many homes were heated by private geothermal wells, and owners were concerned that the city system could lower the water level and/or reduce water temperatures. System operation was delayed until 1984 following an aquifer study. Full operational testing showed no negative impact on the private wells. The system was shut down again in 1986 after multiple distribution piping failures were discovered. By 1991, the distribution piping had been reconstructed, and the system was again operating. The system has been expanded since then, and according to the Oregon Institute of Technology, the operation is "at or near operational break-even".[25] The system is used to provide direct heat for homes, city schools, greenhouses, government and commercial buildings, geothermally heated snowmelt systems for sidewalks and roads, and process heat for the wastewater treatment plant.[25]

According to Oregon's Department of Environmental Quality significant efforts are being made to improve the air quality in the Klamath Basin. The following excerpts are from a report produced by DEQ in September 2012. 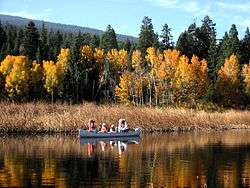 Klamath Falls has a high desert landscape. The older part of the city is located above natural geothermal springs. These have been used for the heating of homes and streets, primarily in the downtown area.[27]

Klamath Falls is known as “Oregon’s City of Sunshine” because the area enjoys 300 days of sun per year.[28] Klamath Falls is a high desert and features a climate with cold snowy winters along with hot summer afternoons and cool summer nights. Under the Köppen climate classification the city’s climate type is Csb, often described as Warm Summer Mediterranean. Using the 0 °C (32 °F) isotherm preferred by some climatologists Klamath Falls is a Dsb climate, often described as Warm Summer Continental Mediterranean.

There were 8,542 households of which 30.4% had children under the age of 18 living with them, 38.5% were married couples living together, 13.0% had a female householder with no husband present, 5.6% had a male householder with no wife present, and 42.9% were non-families. 32.9% of all households were made up of individuals and 11.3% had someone living alone who was 65 years of age or older. The average household size was 2.35 and the average family size was 2.98.

The racial makeup of the city was:

9.32% of the population are Hispanic or Latino of any race.

There were 7,916 households out of which:

The age distribution was: 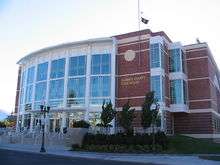 Klamath Falls is a home rule municipality under the Oregon Constitution, and has been governed by a council–manager form of government since its citizens voted to adopt the current charter in 1972.[39] The city council, which is nonpartisan, has five members, each elected from one of the five wards. They serve four-year terms, which are staggered so that either two or three seats are up for election every two years. The mayor, who is nonpartisan and serves a term of four years, presides over all city council meetings. This official appoints committees, can veto any ordinance not passed with the affirmative vote of at least four council members, and casts tie-breaking votes. The city manager, however, is the administrative head of the city. This official is appointed by the council and serves an indefinite term at the council's pleasure. The municipal judge and the city attorney are appointed on the same basis. Todd Kellstrom has been mayor since 1992, and is currently serving a fifth consecutive term. Nathan Cherpeski is the current city manager.[40] 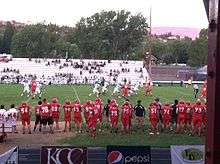 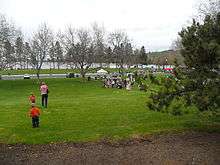 Klamath Falls is home to many outdoor winter and summer activities. The nearby Running Y Ranch Resort & hotel features a golf course designed by Arnold Palmer[42] and an ice skating arena. The resort overlooks Upper Klamath Lake, the largest freshwater body west of the Rocky Mountains.[43] There is also a canoe trail through the wildlife refuge at Rocky Point.

With the help of many passionate community members, Klamath Falls has developed a series of trails in Moore Park. The trail network in and around Moore Park is well loved and heavily used by hikers, cyclists, runners, and others. Users have put countless hours into developing and improving excellent trails that offers varied terrain and vegetation, stunning views of Upper Klamath Lake and the Klamath Basin, and a range of difficulty levels.[44]

The OC&E Woods Line State Trail is a rail trail in the city and is the longest state park in Oregon. Wiard Park, along the OC&E State Trail and operated by the Wiard Memorial Park and Recreation District,[45] is open dawn to dusk from May 1 to October 1. Klamath Falls has a Veterans Memorial Park located downtown along the shore of Lake Ewauna.

Klamath Falls is located on the Pacific Flyway, and large numbers of waterfowl and raptors are seen throughout the year. A large number of bald eagles winter in Bear Valley, located 10 miles (16 km) west of Klamath Falls, near Keno, and the American white pelican shows in great numbers in summer.

Crater Lake National Park is 50 miles (80 km) north of Klamath Falls, and 33-mile (53 km) Rim Drive, which circles the lake, is a favorite of cyclists. Winter cross country skiing and snow shoeing in the park is also very popular. The more-than-mile-high Crater Lake Marathon is an annual event.[46]

Lava Beds National Monument is about 30 miles (48 km) to the southeast of Klamath Falls near the town of Tulelake, California. The Lava Beds provide an excellent opportunity to explore an area that has perhaps the highest concentration of lava tubes. The monument also interprets the Modoc War, including the First Battle of the Stronghold.

Mountain Lakes Wilderness Area, one of the first designated wilderness areas in the United States, lies just to the west of Klamath Falls, providing some excellent opportunities for backpacking and fishing in pristine mountain lakes.

Klamath Falls Airport is also the location of the Kingsley Field Air National Guard Base, the airport and base are located 6 miles (9.7 km) south of downtown.

Klamath Falls has one sister city,[50] as designated by Sister Cities International: