Hood River County is a county located in the U.S. state of Oregon. As of the 2010 census, the population was 22,346.[1] The county seat is Hood River.[2] The county was established in 1908 and is named for the Hood River, a tributary of the Columbia River.

The Hood River Valley is a top producer of apples, pears, and cherries and is known for its famous Fruit Loop driving tour that stops at family farms and fruit stands. Situated between Mount Hood and the Columbia River in the middle of the Columbia River Gorge, Hood River County is a popular destination for outdoor enthusiasts, such as windsurfers, mountain-bikers, skiers, hikers, kayakers, and many more.

The first permanent settlers in present-day Hood River County filed a donation land claim in 1854. The first school was built in 1863 and a road from The Dalles was completed in 1867. By 1880 there were 17 families living in the valley. By the latter part of the nineteenth century farmers of Japanese, Finnish, German, and French ethnicity had settled in the valley.

At the turn of the twentieth century, the people of the Hood River region in the northwest portion of Wasco County expressed a desire for political separation from the parent county. The passage of a statewide initiative established Hood River as the thirty-fourth county of the state. It was made official by a governor's proclamation on June 23, 1908. The Columbia River Highway was completed in 1922 from Portland to The Dalles, improving access between both those cities as well as to Hood River.

In response to controversy surrounding county approval of locating a destination resort at Cooper Spur ski area on Mount Hood, on November 5, 2003 62% of the voters approved a measure requiring voter approval on residential developments of 25 units or more on land zoned for forest use. Opponents claimed that this measure was not enforceable and would end up in court.

The County lies in a transition zone in the Columbia River Gorge between the temperate rain forest of the Cascade range and dry desert of eastern Oregon. Precipitation varies considerably by longitude and elevation. Annual precipitation averages over 76 inches in Cascade Locks, but is less than 31 inches in the City of Hood River.[4] At the highest reaches of the County on Mt. Hood precipitation can be up to 150 inches annually.[5]

The Gorge can have a moderating effect on air temperatures in the County near the Columbia River when maritime air moves in from the west. Major easterly flows, however, can occasionally cause extreme cold conditions as cold air moves west through the Gorge. Winds are generally from the west in the summer, resulting in strong and consistent winds on the Columbia River at Hood River County, making Hood River a world-renowned wind surfing location. Winter winds can blow from either the east or the west and can be of sufficient force to result in widespread damage.[6]

Of the 20,258 people in the population that are five years and older, 25.6 percent speak Spanish or Spanish Creole, and 69 percent of this group speak English less than “very well.”[21]

Hood River is a home rule county with an administrative style of government. The county is governed by an elected board of five commissioners. Four commissioners are elected from four geographic districts, and the Chair is elected at large.[26]

The County operates two campgrounds at Toll Bridge Park and Tucker Park. The Forestry Department manages the 31,000 acre County Forest for timber sale revenue and to develop and maintain recreation trails. In fiscal year 2014 gross revenue from County timber sales was $3,851,646 while Forestry Department expenses where $1,049,648. Property taxes generated $3,071,038 in revenue in the same year.[27] 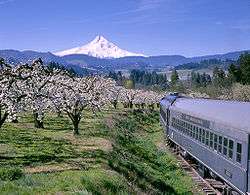 Health Care and Social Assistance was the largest major NAICS industry sector in Hood River County in 2013, with 14 percent of earnings. Manufacturing, at 12 percent, was the second largest sector. Farm Earnings combined with Forestry, Fishing and Related Activities represented nearly 11 percent of earnings. The Professional, Scientific, and Technical Services sector, while accounting for seven percent of earnings in 2013, was the fastest growing sector between 2002 and 2013, growing at an average annual rate of over 11 percent, and increasing its relative share of total earnings by 6.45 percent. Earnings in the Health Care and Social Assistance sector grew at an average of over five percent per year during that period.[29]

Despite a relatively small share of total earnings, farming, forestry and tourism are all important economic drivers in Hood River County. In 2013, Farm Earnings and Forestry, Fishing and Related Activities had location quotients of 8.57 percent and 12.09 percent, respectively, indicating an outsized concentration of these sectors within the County. The Arts, Entertainment, and Recreation industry, while comprising less than four percent of total earnings, had a location quotient of 3.27 percent, the highest of any county in the State of Oregon, indicating a highly concentrated tourism sector.[30]

The Columbia River, which runs right by the city of Hood River, has become a premier windsurfing destination, attracting windsurfers from throughout the United States and around the world. Cool, moist coastal air is drawn through the Columbia River Gorge as the desert to the east heats up on warm days, creating winds between 15-35 knots most days in the summer. With the current in the Columbia River flowing from east to west, and the wind blowing from west to east, large swells are created on the river that windsurfers enjoy riding like waves. Windsurfing has affected the local economy in many ways: windsurfing-oriented businesses and upscale restaurants catering to visiting windsurfers have reinvigorated the downtown area, many people who first visited Hood River in search of wind and waves have settled in the area and become an integral part of the community, and the local economy has been infused with much needed tourist dollars.

The Mount Hood Railroad provides freight service, connecting with the Union Pacific at Hood River, Oregon, and operates excursion trains and dinner trains on a 22-mile (35 km) rail line running from Hood River to Parkdale. The line was completed in 1909, and operated as an independent company until acquired by Union Pacific Railroad in 1968. In 1987 a local group of investors purchased the line for $600,000, naming it the Mount Hood Railroad. In 2008 Mount Hood Railroad was acquired by Iowa Pacific Holdings, based in Chicago. The company leases storage on its lines for excess freight cars, in addition to, or at times in place of, operating recreational rides. [31]