In 1970, under the management of Zdravko Rajkov, Esteghlal Tehran became the first Iranian football club to win the Asian Club Championship.

They have won several official titles on the national and international stage since 1970, including eight Iranian League (1st tier) titles[2] and a record 6 Hazfi Cups.[3][4] There are two golden stars above the team's official badge to represent winning two titles in Asian Club Championship (1970 and 1991). 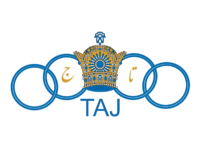 On September 20, 1945 three Iranian military officers—Mirzani, Jananpour and Navab—started a sports club on Ferdowsi Street, Tehran. Since the founders of the club were mostly interested in cycling, the club's original name was Docharkhe Savaran (Persian: دوچرخه سواران‎‎), meaning 'The Cyclists' in Persian. Esteghlal football club played its first official match in 1946.

From the beginning Taj or Docharkeh Savaran competed in the Tehran Local League, which at the time was the highest ranked league in Iran. On 6 March 1950, Taj played its first official game in front of over 20,000 spectators in Amjadieh Stadium against Shahin; Taj managed a close 1–0 win. Later in that year, the club's name was officially changed to Taj which means crown in Persian. In 1970, Taj defeated Hapoel Tel Aviv of Israel 2–1 in the final to win its first ever Asian Club Championship.

After the 1979 Islamic Revolution in Iran, the club was confiscated by the newly established Islamic government and put under the control of the Physical Education Organization of Islamic Republic of Iran (Persian: سازمان تربیت بدنی جمهوری اسلامی ايران‎‎), a governmental organization, and changed its name to Esteghlal (Persian: استقلال‎‎), 'Independence' in Persian; Taj (Persian: تاج ‎‎) means 'Crown' in Persian. After the revolution, any sign of the previous monarchist regime was not tolerated. During the 1980s, Esteghlal won the Tehran Football League twice. The 1989–90 season was a memorable one for Esteghlal. The club finished 1st in Group B of the Qods League and advanced to the semifinals. Esteghlal defeated Malavan 4–0 on aggregate to advance to the final against the hated rival: Persepolis. Esteghlal defeated Persepolis 2–1 through a 74th-minute goal by Samad Marfavi to win the Qods League; this proved to be one of the most memorable derbies for Esteghlal. In the following season, Esteghlal made it to the final of the Hazfi Cup only to lose to Malavan on penalties. 1991 proved to be one of Esteghlal's most memorable years as they won the Asian Club Championship for the 2nd time defeating Chinese club Liaoning 2–1. Esteghlal once again reached the final of the Asian Club Championship in 1999, this time losing to Japanese club Júbilo Iwata 1–2.

2001 marked the first year of the newly founded Iran Pro League. Going into the final day, Esteghlal was on top of the league's table; however, with an Esteghlal loss and a Persepolis win, Persepolis was crowned as the league's inaugural champion. However, the 2001–02 Hazfi Cup provided some consolation for Esteghlal as they beat Fajr Sepasi 4–3 on aggregate to win the cup. The 2002–03 season was one of the worst years in club history, as they finished 9th under the management of Roland Koch and were eliminated in the group stage of the AFC Champions League.

In July 2003, Amir Ghalenoi was appointed manager of Esteghlal. In his first year, Esteghlal finished runner-up in the league, finishing two points behind the champion Pas Tehran. Ghalenoi also made it to the final of the Hazfi Cup losing 2–5 on aggregate to Sepahan. His second season proved to be less successful as Esteghlal finished 3rd and failed to qualify to the AFC Champions League. However, the 2005–06 season was a completely different year; Esteghlal were crowned champions of the Iran Pro League for the first time in the Pro League era. At the end of the season, Ghalenoi left Esteghlal for the national team job.

In 2006 after the departure of Amir Ghalenoi, his assistant and youth team coach Samad Marfavi took over the head-coaching job. Esteghlal had a disappointing season, finishing fourth, thus failing to secure a spot in the AFC Champions League, as well as only reaching the Round of 16 in the Hazfi Cup with a shock defeat to Fajr Sepasi. After Marfavi's departure in August 2007, another Esteghlali great, former goalkeeper Nasser Hejazi took over; but after only 14 games and 4 defeats, Hejazi was fired as manager in November 2007. Firouz Karimi was hired as the temporary head coach for the remainder of the season; he did not fare much better than Hejazi and the team finished 13th in the league, its lowest finish ever. Firouz Karimi was fired in May 2008 and Amir Ghalenoi was hired again in July 2008. He quickly regrouped the team and the Hazfi Cup proved to be a valuable consolation, as Esteghlal became champions after defeating Pegah Gilan 3–1 on aggregate, thus securing a Champions League spot after a two-year absence. During Ghalenoi's first full and only season in his second stint with Esteghlal, he led the team to a Iran Pro League championship, finishing ahead of Zob Ahan on goal difference. However, after a group stage exit in the AFC Champions League, Ghalenoi resigned. Samad Marfavi took the reigns of Esteghlal for a second time; Marfavi led the team to a 3rd place league finish in the 2009–10 season and also led the team to the Round of 16 of the AFC Champions League, losing to Al Shabab of Saudi Arabia 2–3 on aggregate. In the spring of 2010, Marfavi extended his contract for another year, but strangely a few days later he resigned. This time Esteghlal turned to Parviz Mazloumi, a former Esteghlal player in the 1980s. During his 2-year tenure with Esteghlal, he led the team to 2nd and 3rd place league finishes, as well as a Hazfi Cup trophy in 2012. After a 0–2 loss to fellow countrymen Sepahan in the Round 16 of the AFC Champions League, Mazloumi was sacked by the club and Amir Ghalenoi took the reins of Esteghlal for a third time.

The new era started with an exciting year for Esteghlal as both former Aston Villa man Jlloyd Samuel and Iran national football team captain Javad Nekounam joined the team. With these players, Ghalenoi had no trouble leading Esteghlal to a comfortable league victory in his first season back. The team also made it to the semi-finals of the Hazfi Cup which they eventually lost to Sepahan. The year was also marked by advancing to the AFC Champions League semi-finals where they met Korean side FC Seoul. After a 0–2 away loss in the first leg, Esteghlal faced an uphill task; they returned to the Azadi Stadium with much belief but eventually lost to FC Seoul 2–4 on aggregate. The next season however was a disappointing one for Ghalenoi and his team. With a chance to win the league on the final match day, Esteghlal lost 1–3 to Tractor Sazi and dropped to 5th place, and out of a champions league slot. Esteghlal also faced a shock defeat at the hands of Mes Kerman in the Hazfi Cup semi-finals. To top off Esteghlal's horrendous year, the team failed to reach the AFC Champions League knock-out stage, finishing 3rd in its group. Amir Ghalenoi earned the title of "General" from the club's fans for his performance.

After Esteghlal's defeat to Zob Ahan in the Hazfi Cup final on May 29, 2016; Parviz Mazloomi was fired and replaced by former player and Naft Tehran's head coach Alireza Mansourian on June 1, 2016.

The club's biggest rival and its opponent in the Tehran Derby is Persepolis. The first derby match between the clubs took place on April 5, 1968 at Amjadieh Stadium. Today, all derbies and home matches are played at the Azadi Stadium which is usually sold out for the derby.

In 1995, IRIFF began to invite foreign referees to officiate the derby to ease fans and players suspicions of referee bias. This occurred after the events of the 38th derby (January 20, 1995) in which Persepolis was leading by a score of 2–0 until the 79th minute when Esteghlal scored two goals within 8 minutes to erase the deficit; 1st goal was scored from the penalty spot which angered the Persepolis fans and players who felt the referee was biased towards Esteghlal. Persepolis fans stormed the field in the 88th minute and fights broke out on the pitch between fans and players. Following the match, it was decided that Iranian referees would no longer be used for the derby. After 14 years of foreign referees, the second leg of the 2008–09 season saw an Iranian once again refereeing the derby. The game ended in a draw with goals coming from Mojtaba Jabari and Maziar Zare. 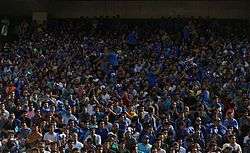 Esteghlal is the highest supported team in Iranian football. The club is based in Tehran and is popular in all parts of the country. Esteghlal also has a fan base in the United States, Europe and Persian Gulf countries. 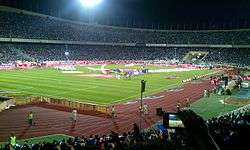 Esteghlal fans celebrating their team's league title championship in the last match of the 2012–13 season at the Azadi Stadium.

The Azadi Stadium is Iran's national stadium and the largest in the country. The Azadi Stadium officially had a capacity of 100,000 people at the beginning[56][57] and was built to host the 1974 Asian Games. The stadium is part of the much larger Azadi Sports Complex and is surrounded by a rowing river, football training pitches, a weightlifting complex, swimming facilities and indoor volleyball and futsal courts, among many other amenities. Today, Azadi Stadium has a capacity of 78,116 after renovations in 2016.[58]

Esteghlal's home stadium is Azadi (Persian: ورزشگاه آزادی‎‎), a football stadium in Tehran, Iran. The Stadium's former name was Aryamehr Stadium which was changed after the Iranian Revolution. The stadium has been filled over capacity on numerous occasions; for example, when it has faced rivals Persepolis in the Tehran Derby or in several AFC Champions League matches. Prior to the construction of Azadi, Esteghlal used to play their games at Amjadieh Stadium. 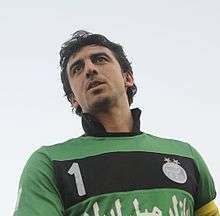 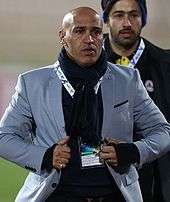 Former captain Alireza Mansourian is the current manager of the club 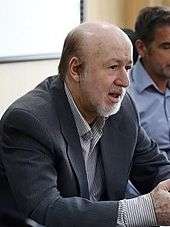 Reza Eftekhari is the current chairman of the club

Only managers who have won at least one trophy are listed.

For details on seasons, see List of Esteghlal F.C. seasons