A total of 32 clubs compete in the round robin group stage of the competition. Clubs from Asia's strongest national leagues receive automatic berths, with clubs from other nations eligible to qualify via the qualifying playoffs and, in addition, they are also eligible to participate in the AFC Cup. Since 2009, the champions do not qualify automatically for the following year competition. The winner of the AFC Champions League qualifies for the FIFA Club World Cup.

The most successful club in the competition is the Pohang Steelers with a total of three titles. The reigning champions of the competition are the Jeonbuk Hyundai Motors.

The competition started as the Asian Champion Club Tournament, the competition had a variety of different formats with the inaugural tournament staged as a straightforward knockout format. The two most successful clubs of this era were Maccabi Tel Aviv and Hapoel Tel Aviv from Israel. The tournament was not held after the 1971 edition for fourteen years due to a lack of professionalism and interest.

In 1985/86 competition marked the return of the premier club tournament rebranded the Asian Club Championship. The format would again change for time to time with a few withdrawals also seen. In 1990, the Asian Football Confederation introduced the Asian Cup Winners Cup, with the 1995 season seeing the introduction of the Asian Super Cup.

The 2002/03 season saw the Asian Club Championship, Asian Cup Winners Cup and Asian Super Cup combine to become the AFC Champions League. League and Cup Winners would qualify for the qualifying playoffs with the best eight clubs from east and west Asia progressing to the Group Stage. The first winners under the AFC Champions League name was Al Ain defeating BEC Tero 2–1 on aggregate. The competition would be postponed for one year due to the SARI Virus.

The tournament was re-launched in 2004 with 29 clubs from fourteen countries. Unlike the previous year, the tournament schedule was changed to March to November. In the group stage, the 28 clubs were divided into seven groups of four on a regional basis, separating East Asian and West Asian clubs to reduce traveling costs, and played double round-robin on a home and away basis. Then, the seven group winners along with the defending champions qualified to the quarterfinals. The quarterfinals, semifinals, and finals were played as a two-legged format, with away goals, extra time, and penalties used as tie-breakers.

The 2005 season saw Syrian clubs join the competition, thus increasing the number of participating countries to 15, and two years later, following their transfer into the AFC in 2006, Australian clubs were also included in the tournament. Owing to the lack of professionalism in Asian football, many problems still existed in the tournament, such as on field violence and late submission of player registration. Many blamed the lack of prize money and expensive travel cost as some of the reasons.

The Champions League expanded to 32 clubs in 2009 with direct entry to the top ten Asian leagues. Each country received up to 4 slots, though no more than one third of the number of teams in that country's top division, rounded downwards, depending on the strength of their league, league structure (professionalism), marketability, financial status, and other criteria set by the AFC Pro-League committee.[1]

The assessment criteria and ranking for participating associations would be revised by AFC every two years, with the most recent ones being approved for the 2011–2012 seasons.[2]

The prize money has been significantly increased since 2009 season and the clubs can earn some prize money even at the group stage depending on their performance. The group stage was conducted in the same manner as the previous four tournaments; this time, however, now eight group winners and eight runners-up qualify to the Round of 16, in which group-winners play host to the runners-up in a single match format, matched regionally.

The regional restriction was lifted from the further stages, though since 2010 season clubs from the same country cannot face each other in the quarterfinals unless that country has three or more representatives in the quarterfinals. The quarterfinals and the semifinals are played in two-legged series, with away goal, extra time, and penalties used as tie-breakers. The final is played as a single match at a pre-determined neutral venue.

In 2013, the Asian Football Confederation made a proposal to revert the final back to a single leg and allow the best twenty-three member associations that meet the ACL Criteria to compete. A final decision on the proposals was made in November 2013.[3] On 26 November 2013, the executive committee decided to keep the Final two legs after the success of the 2013 AFC Champions League Final and expand the competition to nineteen member associations.[4] 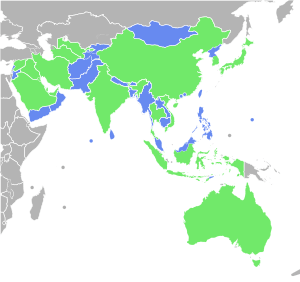 As of 2009 edition of the tournament, the AFC Champions League has commenced with a double round-robin group stage of 32 teams, which is preceded by qualifying matches for teams that do not receive direct entry to the competition proper. Teams are also split into east and west zones to progress separately in the tournament.

The number of teams that each association enters into the AFC Champions League is determined annually through criteria as set by the AFC Competitions Committee.[5] The criteria, which is a modified version of the UEFA coefficient, measures such thing as marketability and stadia to determine the specific number of berths that an association receives. The higher an association's ranking as determined by the criteria, the more teams represent the association in the Champions League, and the fewer qualification rounds the association's teams must compete in.

The tournament proper begins with a group stage of 32 teams, divided into eight groups. Seeding is used whilst making the draw for this stage, whilst teams from the same country may not be drawn into groups together. Each team meets the others in its group home and away in a round-robin format. The winning team and the runners-up from each group then progress to the next round.

For this stage, the winning team from one group plays against the runners-up from another group, and teams from the same association may not be drawn against each other. From the quarter-finals onwards, the draw is entirely random, without association protection. The tournament uses the away goals rule: if the aggregate score of the two games is tied after 180 minutes, then the team who scored more goals at their opponent's stadium advances. If still tied the clubs play extra time, where the away goals rule is no longer applied. If still tied after extra time, the tie shall be decided through a penalty shootout.

The group stage and Round of 16 matches are played through the first half of the year (February–May), whilst the knock-out stage there after is played during the second half of the year (August–November). The knock-out ties are played in a two-legged format, with the exception of the final. From 2014, east and west zones will be kept part until the final with no country protection rule applied.[5]

Like the FIFA World Cup, the AFC Champions League is sponsored by a group of multinational corporations, in contrast to the single main sponsor typically found in national top-flight leagues.

The tournament's current main sponsors are:

The current license holder for the AFC Champions League video game is Konami with the Pro Evolution Soccer series.[13] The License also includes the competing teams.

The following table lists clubs by number of Winners and Runners-up in the Asian Club Championship and AFC Champions League.

Notes
1 Club no longer exists.
2 In 1974 the Israel FA was expelled from the AFC due to political pressure, and became a full UEFA member in 1994. As a result, Israeli clubs no longer participate in AFC tournaments but in their UEFA counterparts instead.

The following table lists countries by number of Winners and Runners-up in the Asian Club Championship and AFC Champions League.