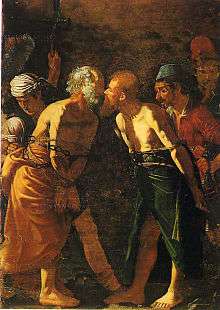 Farewell of Saints Peter and Paul, showing the Apostles giving each other the holy kiss before their martyrdom. (Alonzo Rodriguez, 16th century, Museo Regionale di Messina).

The kiss of peace is an ancient traditional Christian greeting. Also called "Holy kiss", "Brother kiss" among men, or "Sister kiss" among women. Some congregations do not perform inter-gender holy-kissing. It is not the Socialist fraternal kiss.

It was the widespread custom in the ancient western Mediterranean for men to greet each other with a kiss. [1] That was also the custom in ancient Judea and practiced also by Christians.

The writings of the early church fathers speak of the holy kiss, which they call "a sign of peace", which was already part of the Eucharistic liturgy, occurring after the Lord's Prayer in the Roman Rite and the rites directly derived from it. St. Augustine, for example, speaks of it in one of his Easter Sermons:

Then, after the consecration of the Holy Sacrifice of God, because He wished us also to be His sacrifice, a fact which was made clear when the Holy Sacrifice was first instituted, and because that Sacrifice is a sign of what we are, behold, when the Sacrifice is finished, we say the Lord's Prayer which you have received and recited. After this, the 'Peace be with you’ is said, and the Christians embrace one another with the holy kiss. This is a sign of peace; as the lips indicate, let peace be made in your conscience, that is, when your lips draw near to those of your brother, do not let your heart withdraw from his. Hence, these are great and powerful sacraments.[3]

Augustine's Sermon 227 is just one of several early Christian primary sources, both textual and iconographic (i.e., in works of art) providing clear evidence that the "kiss of peace" as practiced in the Christian liturgy was customarily exchanged for the first several centuries, not mouth to cheek, but mouth to mouth (note that men were separated from women during the liturgy) for, as the primary sources also show, this is how early Christians believed Christ and his followers exchanged their own kiss. For example, In his Paschale carmen (ca. 425-50), Latin priest-poet Sedulius condemns Judas and his betrayal of Christ with a kiss thus, "And leading that sacrilegious mob with its menacing swords and spikes, you press your mouth against his, and infuse your poison into his honey?"[4] The kiss of peace was known in Greek from an early date as eirḗnē (εἰρήνη) ("peace", which became pax in Latin and peace in English).[5] The source of the peace greeting is probably from the common Hebrew greeting shalom; and the greeting "Peace be with you" is similarly a translation of the Hebrew shalom aleichem. In the Gospels, both greetings were used by Jesus - e.g. Luke 24:36; John 20:21, 20:26. The Latin term translated as "sign of peace" is simply pax ("peace"), not signum pacis ("sign of peace") nor osculum pacis ("kiss of peace"). So the invitation by the deacon, or in his absence by the priest, "Let us offer each other the sign of peace", is in Latin: Offerte vobis pacem ("Offer each other peace" or "Offer each other the peace").

From an early date, to guard against any abuse of this form of salutation, women and men were required to sit separately, and the kiss of peace was given only by women to women and by men to men.[5]

The practice remains a part of the worship in traditional churches, including the Roman Catholic Church, Eastern Catholic Churches, Eastern Orthodox churches, Oriental Orthodox churches; some liturgical mainline Protestant denominations; and Spiritual Christian, where it is often called the kiss of peace, sign of peace, Holy kiss or simply peace or pax; It is practiced as a part of worship in many Anabaptist heritage groups including Old German Baptist Brethren, and Apostolic Christian.

In the Catholic Church, the term now used is not "the kiss of peace", but "the sign of peace" or "the rite of peace". The General Instruction of the Roman Missal states: "There follows the Rite of Peace, by which the Church entreats peace and unity for herself and for the whole human family, and the faithful express to each other their ecclesial communion and mutual charity before communicating in the Sacrament."[6] The priests says or sings: "The peace of the Lord be with you always", to which the people respond: "And with your spirit." Then, as stated in the Roman Missal, "if appropriate, the Deacon, or the Priest, adds: 'Let us offer each other the sign of peace.'"[7]

In the Roman Rite, it is placed after the Pater Noster and before the Fractio Panis. Even within the Catholic Church, there are liturgical rites (the Ambrosian Rite and the Mozarabic Rite) in which it is placed after the Liturgy of the Word, before the gifts for consecration are put on the altar. The latter placing is influenced by the recommendation in Matthew 5:23–24 about seeking reconciliation with another before completing an offering at the altar. It was a practice in Rome itself at the time of Justin Martyr in the middle of the 2nd century. In the 3rd century the present placing was chosen not only in Rome but also in other parts of the West such as Roman Africa, where Saint Augustine understood it as related to the petition, "Forgive us our trespasses as we forgive those who trespass against us", in the Lord's Prayer and to the link between being in communion with the body of Christ understood as the Church and receiving communion with the body of Christ in the Eucharist.[8]

In the Tridentine Mass form of the Roman Rite, the sign of peace is given at Solemn Masses alone and is exchanged only among the clergy. It is given by extending both arms in a slight embrace with the words "Pax tecum" (Peace be with you), first by the priest celebrant to the deacon, who in turn gives it to the subdeacon, who gives the sign to any other clergy present in choir dress.

The following are considered abuses:[10]

The gesture by which the sign of peace is exchanged is to be determined by the local episcopal conference. In some countries, such as the United States, the conference has laid down no rules, and the everyday handshake is generally used, while in other countries, such as India and Thailand, a bow is prescribed.[11] A 2014 letter of the Congregation for Divine Worship and the Discipline of the Sacraments recommended that conferences choose gestures more appropriate than "familiar and profane gestures of greeting".[9]

In the Eastern Orthodox Church's Divine Liturgy of St. John Chrysostom, the exchange of the peace occurs at the midpoint of the service, when the scripture readings have been completed and the Eucharistic prayers are yet to come. The priest announces, "Let us love one another that with one accord we may confess--" and the people conclude the sentence, "Father, Son, and Holy Spirit, the Trinity, one in essence and undivided." At that point the Kiss of Peace is exchanged by clergy at the altar, and in some churches among the laity as well (the custom is being reintroduced, but is not universal). Immediately after the peace, the deacon cries "The doors! The doors!"; in ancient times, the catechumens and other non-members of the church would depart at this point, and the doors would be shut behind them. At that, worshippers then recite the Nicene Creed. In the Eastern Orthodox Liturgy, the Kiss of Peace is preparation for the Creed: "Let us love one another that we may confess...the Trinity."

In the early centuries the kiss of peace was exchanged between the clergy: clergy kissing the bishop, lay men kissing laymen, and women kissing the women, according to the Apostolic Constitutions. Today the kiss of love is exchanged between concelebrating priests. Such has been the case for centuries. In a few Orthodox dioceses in the world in the last few decades, the kiss of peace between laymen has attempted to be reinstituted, usually as a handshake, hugging or cheek kissing.

Another example of an exchange of the peace is when, during the Divine Liturgy, the Priest declares to the people "Peace be with all", and their reply: "And with your Spirit". More examples of this practice may be found within Eastern Orthodoxy, but these are the most prominent examples.

Different Protestant and Reformed churches have readopted the holy kiss either metaphorically (in that members extend a pure, warm welcome that is referred to as a holy kiss) or literally (in that members kiss one another). This practice is particularly important among many Anabaptist sects.