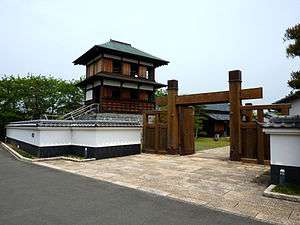 Reconstruction of Tanaka Castle in Fujieda

Fujieda is located in the Shida Plateau in central Shizuoka Prefecture between the Abe River and the Ōi River. The area enjoys a warm maritime climate with hot, humid summers and mild, cool winters.

Under the Tokugawa shogunate of Edo period Japan, much of the area of present-day Fujieda was part of Tanaka Domain, and its castle formed part of the eastern outlying fortifications of Sunpu. The town also developed as Fujieda-juku, a post town on the Tōkaidō highway connecting Edo with Kyoto.

During the cadastral reform of the early Meiji period in 1889, Fujieda-juku became Fujieda Town within Shida District Shizuoka Prefecture. Fujieda Station on the Tōkaidō Main Line railway opened on April 16, 1889, leading to development of the surrounding area. On March 31, 1954, Fujieda merged with neighboring Aoshima Town and four neighboring villages to form Fujieda City. Setoya Village merged on February 15, 1955 and Hirohata Village on April 1, 1957.

On January 1, 2009, the neighboring town of Okabe (from Shida District) was merged into Fujieda. Shida District was dissolved as a result of this merger.[1]

Fujieda is primarily a bedroom community for nearby Shizuoka. The local economy is dominated by agriculture (tea, strawberry, rice, shiitake) and by light manufacturing, including pharmaceuticals, beverages, and food processing.

Fujieda has 17 elementary schools, ten public and two private middle schools, and three public and three private high schools. In addition, Shizuoka Sangyo University has a campus in Fujieda, and the agricultural fields for Shizuoka University are also located in the city.