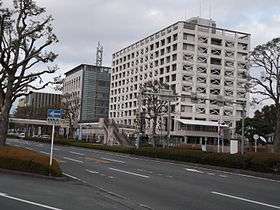 Located on the banks of the Fuji River, most of the city of Fuji enjoys good views of Mount Fuji, part of whose summit is within the city borders. The city is bordered to the south by Suruga Bay on the Pacific Ocean. The area enjoys a warm maritime climate with hot, humid summers and mild, cool winters.

Kajima became the town of Fuji on August 1, 1929. Neighboring Takaoka was elevated to town status on January 1, 1933. Shimada merged into Yoshiwara in 1940, Denbō in 1941, and Imaizumi in 1942. Yoshiwara was elevated to city status on April 1, 1948, the city expanded through annexation of Motoyoshiwara, Sudo, Yoshinaga, and Harada villages in 1955 and Ōbuchi in 1956.

Tagoura and Iwamatsu merged with Fuji to form the city of Fuji on March 31, 1954. The city expanded through annexation of neighboring Ukijima and San area from Hara, Suntō District in 1956.

On November 1, 1966, Fuji and Yoshiwara merged with Takaoka to form the new city of Fuji, which attained the status of a Special City on April 1, 2001 with greater autonomy from the central government.

On November 1, 2008, the town of Fujikawa (from Ihara District) was merged with Fuji.

Fuji is one of the major industrial centers of Shizuoka Prefecture, and the city has hosted numerous paper factories including Nippon Paper Industries (former Daishowa Paper Industries) and Oji Paper Company since the Meiji period. Other industries include food processing, metals and transportation equipment. Automobile parts manufacturer Jatco is headquartered in Fuji. Agriculture in the area is concentrated on green tea production and horticulture.

A manhole in Fuji

Another manhole in Fuji