A unique feature of the partition manager is that tasks are executed in the background, even after the application has been closed by the user. 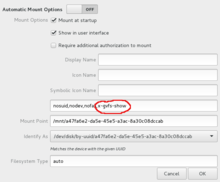 GNOME Disks acts as a front-end to udisks2[6] and gvfs-udisks2-volume-monitor. The mount option x-gvfs-show is not recognized by mount.