Evolution (formerly Novell Evolution and Ximian Evolution, prior to Novell's 2003 acquisition of Ximian) is the official personal information manager for GNOME. It has been an official part of GNOME since Evolution 2.0 was included with the GNOME 2.8 release in September 2004.[6] It combines e-mail, address book, calendar, task list and note-taking features. Its user interface and functionality is similar to Microsoft Outlook. Evolution is free software licensed under the terms of the GNU Lesser General Public License (LGPL). 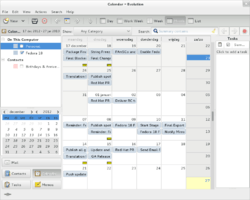 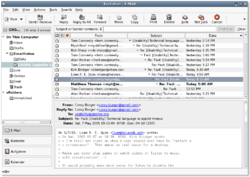 An older version of Evolution

The Novell GroupWise plug-in is no longer in active development.[10] A Scalix plug-in[11] is also available, but its development stopped in 2009.[12]

Evolution Data Server (EDS) is a collection of libraries and session services for storing address books and calendars.[13] Other software such as California[14] and GNOME Calendar[15][16] depend on EDS as well.

Some documentation about the software architecture is available in the GNOME wiki.[17]

Ximian decided to develop Evolution in 2000. It felt there were no e-mail clients for Linux at the time which could provide the functionality and interoperability necessary for corporate users. Ximian saw an opportunity for Linux to penetrate the corporate environment if the right business software was available for it. It released Evolution 1.0 in December 2001 and offered the paid Ximian Connector plug-in which allowed users to connect with Microsoft Exchange Server. Evolution itself has been free software from the start, but Ximian Connector was sold as proprietary software so that Ximian could generate revenue.[19] This changed after Novell's acquisition of Ximian in August 2003. Novell decided to integrate the Exchange plug-in as free software in Evolution 2.0 in May 2004.[20]

Novell was in turn acquired by The Attachmate Group in 2011. It transferred Novell's former Evolution developers to its subsidiary SUSE. In 2012 SUSE decided to stop its funding of Evolution's development and assigned its developers elsewhere. As a consequence only two full-time developers employed by Red Hat remained.[10] Later in 2013 Red Hat dedicated more developers to the project, reinvigorating its development. The reasons given for the decision were the cessation of active development on Mozilla Thunderbird and the requirement for an e-mail client with good support for Microsoft Exchange.[21]

As a part of GNOME, Evolution is released as source code. Linux distributions provide packages of GNOME for end-users. Evolution is used as the default personal information manager on several Linux distributions which use GNOME by default, most notably Debian and Fedora. Ubuntu has replaced Evolution with Mozilla Thunderbird as the default e-mail client since version 11.10, Oneiric Ocelot.[22]

In the past, Evolution was ported to Apple Mac OS X and Microsoft Windows, but these ports are no longer developed.

In 2006, Novell released an installer for Evolution 2.6 on Mac OS X.[23] In January 2005, Novell's Nat Friedman announced in his blog[24] that the company had hired Tor Lillqvist, the programmer who ported GIMP to Microsoft Windows, to do the same with Evolution. Before this announcement several projects with the same goal had been started but none of them reached alpha status. In 2008 DIP Consultants released a Windows installer for Evolution 2.28.1-1 for Microsoft Windows XP and newer.[25] Currently it is only available for download from the project's page on SourceForge.[26]

A slightly more recent experimental installer for Evolution 3.0.2 is provided by openSUSE.[27][28] Users have faced difficulties getting this version working.[29]