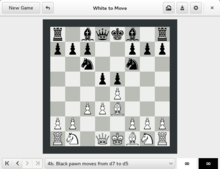 GNOME Chess is written in Vala. For 2D rendering it uses GTK+ and Cairo/librsvg, and 3D support is optionally available using OpenGL.

As part of the GNOME desktop environment and GNOME Games, GNOME Chess is free and open-source software subject to the terms of the GNU General Public License (GPL) version 2.

GNOME Chess supports a plethora of chess engines,[4][5] such as:

glChess, the predecessor to GNOME Chess, can be used with any other CECP and Universal Chess Interface compatible software like:[6][7]

glChess was written by Robert Ancell in 2000 only as a personal project to test open source development.[8]

First version was written in C, OpenGL for graphics, and GLUT for the user interface. In May 5 was released 0.1.0, the first but still not playable version, being only capable to draw board and pieces. Days later, on May 31, version 0.1.3 was finally included on SourceForge and playable on a very basic way.

On April 8, 2001 version 0.2.0 changed GLUT to GTK+ focusing the improvement in visual aspects instead of its chess artificial intelligence. Version 0.3.0, from June 27, could play against other artificial intelligence (AI) engines, like Crafty and GNU Chess, after a Chess Engine Communication Protocol (CECP) implementation and it was ported to IRIX platform. In December, version 0.4.0 was the last one before the project entered into a stand-by time of three years.

In December, 2004, there was an advance to version 0.8.0 in order to accelerate the achievement the 1.0. This version added network support and updated GTK+ from version 1.2 to 2.0.

One year later, December 2005, version 0.9.0 was intended to be the last release before 1.0. It replaced C for Python to improve platform portability and maintenance, besides having a better test approach of the codebase testing.

Apple Chess is a fork of GNOME Chess.