Web (originally called Epiphany from 2003 to 2012) is a free software web browser for the GNOME desktop environment.

The browser was forked from Galeon, after developers' disagreements about Galeon's growing complexity.[4] Since then Web has been developed as part of the GNOME project and uses most of GNOME's technology and settings when applicable. It is part of the GNOME Core Applications. As required by the GNOME Human Interface Guidelines (HIG), Web maintains the clean and simple graphical user interface with only a required minimum number of features exposed to users by default. The browser's functionality and configurability can be extended with official and third-party extensions.[5]

Web's source code is available under the GNU General Public License from the GNOME project. The binary builds of the browser are available in the package repositories of most Linux distributions and BSD releases.[7]

Marco Pesenti Gritti, the initiator of Galeon, originally developed Epiphany in 2002 as a fork of Galeon. The fork occurred because of the divergent aims of Gritti and the rest of Galeon development team about new features. While Gritti regarded Galeon's monolithic design and the number of user-configurable features as factors limiting Galeon's maintainability and user base expansion, the rest of the Galeon developers wanted to see more features added. At the same time the GNOME project created the GNOME human interface guidelines, which promoted simplification of user interfaces. As Galeon was oriented towards power users, most developers saw the implementation of those guidelines as unacceptable. As a result, Gritti created a new browser based on Galeon's codebase, with most of the non-mission-critical features removed. He intended Epiphany to comply fully with the GNOME human interface guidelines, with a very simple user-interface. As such, Epiphany does not have its own theme settings and uses GNOME's settings, which are specified in the GNOME Control Center.[4][5]

While Mozilla has an excellent rendering engine, its default XUL-based interface is considered to be overcrowded and bloated. Furthermore, on slower processors even trivial tasks such as pulling down a menu is less than responsive.

Epiphany aims to utilize the simplest interface possible for a browser. Keep in mind that simple does not necessarily mean less powerful. We believe the commonly used browsers of today are too big, buggy, and bloated. Epiphany addresses simplicity with a small browser designed for the web—not mail, newsgroups, file management, instant messaging or coffee making. The Unix philosophy is to design small tools that do one thing, and do it well.

Galeon continued after the fork, but lost its momentum due to the remaining developers' failure to keep up with the new features and changes Mozilla introduced. Galeon development finally stalled and the developers decided to work on a set of extensions to bring Galeon's advanced features to Epiphany instead.[5]

Epiphany's main goal is to be integrated with the gnome desktop. We don't aim to make Epiphany usable outside Gnome. If someone will like to use it anyway, it's just a plus. For example: Making people happy that don't have control center installed is not a good reason to have mime configuration in Epiphany itself.
— Marco Pesenti Gritti[8]

Gritti ended his work on the Epiphany project and a GNOME team led by Xan Lopez, Christian Persch and Jean-François Rameau now direct the project.[6] Gritti died of cancer on 23 May 2015.[9]

While some promote Epiphany as the default web browser in Linux distributions with GNOME as the default desktop environment, most distros offer Firefox instead.[7] In most minimalist distributions, Epiphany is installed with the GNOME meta-package or packages group.[10][11]

Epiphany initially used the Gecko layout engine from the Mozilla project to display web pages. It provided a GNOME integrated graphical user interface for Gecko, instead of the Mozilla XUL interface.[12]

The development process of Epiphany was mainly focused on numerous small usability improvements. The most notable of them was the new text entry widget, which first appeared in 1.8 stable version series. The new widget supported icons inside the text area reduced the amount of screen space needed to present the information and improved GNOME integration.[13]

The second major milestone (after version 1.0) in Epiphany development was the 2.14 release. This was the first Epiphany release which followed GNOME's version numbering. It also featured network awareness using NetworkManager, smart bookmarks-related improvements and the possibility of being compiled against XULRunner. The latter was critical, as previously Epiphany could only use Firefox or Mozilla/SeaMonkey as a layout engine provider, so it could only be installed alongside one of those browsers. The XULRunner support made it possible to install Epiphany as the sole web browser on the system.[14][15] 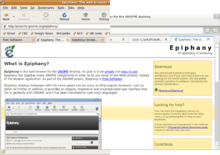 The development process heavily suffered from multiple problems, related to the Gecko backend.[6] To address these issues in July 2007 the Epiphany team added support for WebKit as an alternative rendering engine for Epiphany.[16] As the backend development advanced, on 000000002008-04-01-0000April 1, 2008 the Epiphany team announced that it would stop using the Gecko rendering engine and proceed using just WebKit.[6]

The size of the development team and the complexity of porting the whole browser to a new backend caused Epiphany to re-release version 2.22 with bugfixes instead of the actual development code,[17] so browser development remained stagnant until 000000002009-07-01-0000July 1, 2009, when the project team announced that Epiphany 2.26 would be the final Gecko-based version.[18] Eventually, in September 2009 the Webkit-powered Epiphany 2.28 was released, as part of GNOME 2.28.[19]

With GNOME 3.4 release Epiphany was renamed Web.[20] However, the name Epiphany is still used internally for development, such as for bug tracking and in the source code.[21] The package remains epiphany-browser.[22]

Web is based on the WebKit web browser engine, which provides support for HTML 4 and XHTML, CSS 1 and 2, substantial degree of implementation of HTML5 and CSS 3 features,[62] Web Inspector (HTML and JavaScript debugging tool)[48] and NPAPI, including Adobe Flash and IcedTea plug-ins support.[5]

The built-in preference manager for Web is designed to present user only basic browser-specific settings. All the advanced configuration is done with the stand-alone GSettings configurator tools such as GNOME's default dconf (command line) and dconf-editor (graphical).[65]

Web follows the GNOME Human Interface Guidelines[66] and follows the platform-wide design changes. For example, in Web 3.4 release the menu for application-wide actions was moved to the GNOME Shell's top panel application menu and the menubar was replaced with "super menu" button, which triggers the display of window-specific menu entries.[67]

While most browsers feature a hierarchical folder-based bookmark system, Web uses categorized bookmarks, where a single bookmark (such as "Web") can exist in multiple categories (such as "Web Browsers", "GNOME", and "Computer Software").[68] A special category includes bookmarks that have not yet been categorized. Another innovative concept supported by Web (though originally from Galeon)[4] is "smart bookmarks". These take a single argument specified from the address bar, or from a textbox in a toolbar.[5] Bookmarks, along with browsing history, are accessed from the address bar in find-as-you-type manner.[69]

Up until version 3.6, Web was extensible with a plugin system called Web extensions. This package was distributed by the developers of Web and contained the official extensions. For version 3.8, this system was removed because of problems with stability and maintainability, with some popular extensions being moved to the core application instead. A new, out-of-process plugin system is planned for the future.[70]

Previously extensions could be written in either C or Python, but the Python support was dropped with WebKit adoption.[71]

Several unofficial extensions exist, though most of them are not currently supported.[71][74]

Since GNOME 3.2[75] Web allows creating application launchers for web applications. The subsequent invocation of a launcher brings up a plain single instance of Web limited to one domain, with off-site links opening in a normal browser.[76] The launcher created this way is accessible from the desktop and is not limited to GNOME Shell. For instance it may be used with Unity, used on Ubuntu.[77] This feature facilitates the integration of the desktop and World Wide Web, which is a goal of Web's developers.[78] Similar features can be found in the Windows version of Google Chrome. For the same purpose Mozilla Foundation previously developed a standalone application Mozilla Prism, which was superseded by the project Chromeless.[79]

Web applications are managed within Epiphany's main instance. The applications can be deleted from the page, accessible with a special URI about:applications. This approach was supposed to be a temporary solution and a common GNOME-wide application management was intended to be implemented in GNOME 3.4, but was not rolled out.[24]

Being a component of GNOME desktop environment, Web has neither software, nor hardware dependencies beyond the GNOME platform. Though the GNOME Project does not list the minimum system requirements, it states that GNOME 3 should run on any modern computer.[80]

Web is only released as source code or with Linux distributions and BSDs making binary packages. Thus the availability of Web depends on the distributor.[81] Web can be run on many hardware platforms, including i386, amd64 and several other processor architectures.[10]

In reviewing the Webkit-powered Epiphany 2.28 in September 2009, Ryan Paul of Ars Technica said "Epiphany is quite snappy in GNOME 2.28 and scores 100/100 on the Acid3 test. Using WebKit will help differentiate Epiphany from Firefox, which is shipped as the default browser by most of the major Linux distributors."[19]

In reviewing Epiphany 2.30 in July 2010 Jack Wallen described it as "efficient, but different" and noted its problem with crashes. "When I first started working with Epiphany it crashed on most sites I visited. After doing a little research (and then a little debugging) I realized the issue was with javascript. Epiphany (in its current release), for some strange reason, doesn't like javascript. The only way around this was to disable javascript. Yes this means a lot of features won't work on a lot of sites – but this also means those same sites will load faster and won't be so prone to having issues (like crashing my browser)."[68] Wallen concluded positively about the browser, "Although Epiphany hasn't fully replaced Chrome and Firefox as my one-stop-shop browser, I now use it much more than I would have previously.[68] [It has a] small footprint, fast startup, and clean interface."[68]

In March 2011 Veronica Henry reviewed Epiphany 2.32, saying "To be fair, this would be a hard sell as a primary desktop browser for most users. In fact, there isn't even a setting to let you designate it as your default browser. But for those instance where you need to fire up a lighting-fast browser for quick surfing, Epiphany will do the trick."[82] She further noted, "Though I still use Firefox as my primary browser, lately it seems to run at a snail's pace. So, one of the first things I noticed about Epiphany is how quickly it launches. And subsequent page loads on my system are equally as fast."[82] Henry criticized Epiphany for its short list of extensions, singling out the lack of Firebug as a deficiency.[82] Web instead supports Web Inspector offered by the Webkit engine, which has similar functionality.[48]

In April 2012 Ryan Paul of Ars Technica used Web as an example to his criticism of GNOME 3.4 design decisions: "Aside from the poor initial discoverability of the panel menu, this model works reasonably well for simple applications. [...] Unfortunately, it doesn't scale well in complex applications. The best example of where this approach can pose difficulties is in GNOME's default Web browser. [...] Having the application's functionality split across two completely separate menus does not constitute a usability improvement."[67] This was addressed in later versions, with a single unified menu.

In an October 2016 review Bertel King, Jr. noted on MakeUseOf, "Later versions offer the best integration you will find with GNOME Shell. It lacks the add-ons found in mainstream browsers, but some users will like the minimalism, the speed, and the tab isolation that prevents one misbehaving site from crashing the entire browser."[83]