gedit (/ˈdʒɛdɪt/ or /ˈɡɛdɪt/)[3] is the default text editor of the GNOME desktop environment and part of the GNOME Core Applications. Designed as a general-purpose text editor, gedit emphasizes simplicity and ease of use, with a clean and simple GUI, according to the philosophy of the GNOME project.[4] It includes tools for editing source code and structured text such as markup languages.[4]

It is free and open-source software subject to the requirements of the GNU General Public License version 2 or later.[4] 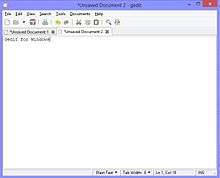 The features of gedit include multi language spell checking via Enchant and a flexible plugin system allowing the addition of new features, for example snippets and integration with external applications including a Python or Bash terminal.[8] A number of plugins are included in gedit itself, with more plugins in the gedit-plugins package and online.[9]

gedit has an optional side pane displaying the list of open files and (in a different tab of the side pane) a file browser. It also has an optional bottom pane with a Python console and (using gedit-plugins) terminal. gedit automatically detects when an open file is modified on disk by another application and offers to reload that file. Using a plugin (in gedit-plugins package), gedit can save and load sessions, which are lists of currently open tabs.[9]

In late 2013 and early 2014 the application received major upgrades, with a new, cleaner user interface and code base improvements to make it work better with other desktop interfaces, such as Unity. The new version of gedit will likely be incorporated in Gnome 3.12 or later.[14]

Valencia is a gedit plugin that turns gedit into a lightweight IDE for Vala.[15]

Being part of the GNOME Core Applications gedit 3 uses the GTK+ 3.0 and GNOME 3.0 libraries. The GNOME integration includes drag and drop to and from GNOME Files.

In December 2008, gedit binaries were made available for Mac OS X and Microsoft Windows.[17]

Newer versions of Gedit (3.0+) for Windows are available through MSYS2 and can be installed via the built-in Pacman package manager.[18]

This audio file was created from a revision of the "Gedit" article dated 2011-07-31, and does not reflect subsequent edits to the article. (Audio help)
More spoken articles
This article is issued from Wikipedia - version of the 11/2/2016. The text is available under the Creative Commons Attribution/Share Alike but additional terms may apply for the media files.