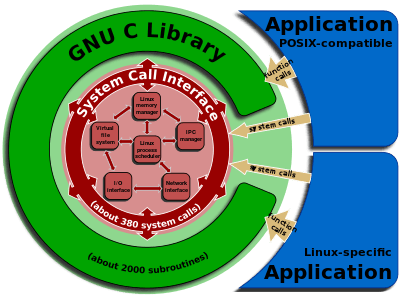 As the GNU C Library serves as a wrapper for Linux kernel system calls, so do the libraries bundled in GLib (GObject, Glib, GModule, GThread and GIO) serve as further wrappers for their specific tasks.

The GLib Object System, or GObject, is a free software library providing a portable object system and transparent cross-language interoperability. GObject is designed for use both directly in C programs to provide object-oriented C-based APIs and through bindings to other languages to provide transparent cross-language interoperability, e.g. PyGObject.

Depending only on GLib and libc, GObject is a cornerstone of GNOME and is used throughout GTK+, Pango, ATK, and most higher-level GNOME libraries like GStreamer and applications. Prior to GTK+ 2.0, code similar to GObject was part of the GTK+ codebase. (The name “GObject” was not yet in use — the common baseclass was called GtkObject.)

At the release of GTK+ 2.0, the object system was extracted into a separate library due to its general utility. In the process, most non-GUI-specific parts of the GtkObject class were moved up into GObject, the new common baseclass. Having existed as a separate library since March 11, 2002 (the release date of GTK+ 2.0), the GObject library is now used by many non-GUI programs such as command-line and server applications.

Though GObject has its own separate set of documentation[3] and is usually compiled into its own shared library file, the source code for GObject resides in the GLib source tree and is distributed along with GLib. For this reason, GObject uses the GLib version numbers and is typically packaged together with GLib (for example, Debian puts GObject in its libglib2.0 package family).

At the most basic level of the GObject framework lies a generic and dynamic type system called GType. The GType system holds a runtime description of all objects allowing glue code to facilitate multiple language bindings. The type system can handle any singly inherited class structure, in addition to non-classed types such as opaque pointers, strings, and variously sized integers and floating point numbers.

This basic functionality is used for implementing GValue, a type of generic container that can hold values of any type known by the type system. Such containers are particularly useful when interacting with dynamically typed language environments in which all native values reside in such type-tagged containers.

Types that do not have any associated classes are called non-classed. These types, together with all types that correspond to some form of root class, are known as fundamental types: the types from which all other types are derived. These make up a relatively closed set, but although the average user is not expected to create his own fundamental types, the possibility does exist and has been exploited to create custom class hierarchies — i.e., class hierarchies not based on the GObject class.

As of GLib 2.9.2,[4] the non-classed built-in fundamental types are

The classed built-in fundamental types are

Types that can be instantiated automatically by the type system are called instantiable. An important characteristic of these types is that the first bytes of any instance always contain a pointer to the class structure (a form of virtual table) associated to the type of the instance. For this reason, any instantiable type must be classed. Contrapositively, any non-classed type (such as integer or string) must be non-instantiable. On the other hand, most classed types are instantiable, but some, such as interface types, are not.

The types that are derived from the built-in GObject fundamental types fall roughly into four categories:

Enumerated types and “flags” types
In general, every enumerated type and every integer-based bitfield type (i.e., every enum type) that one wishes to use in some way that is related to the object system — for example, as the type of an object property — should be registered with the type system. Typically, the initialization code that takes care of registering these types is generated by an automated tool called glib-mkenums[5] and stored in a separate file.
Boxed types
Some data structures that are too simple to be made full-fledged class types (with all the overhead incurred) may still need to be registered with the type system. For example, we might have a class to which we want to add a background-color property, whose values should be instances of a structure that looks like struct color { int r, g, b; }. To avoid having to subclass GObject, we can create a boxed type to represent this structure, and provide functions for copying and freeing. GObject ships with a handful of boxed types wrapping simple GLib data types. Another use for boxed types is as a way to wrap foreign objects in a tagged container that the type system can identify and will know how to copy and free.
Opaque pointer types
Sometimes, for objects that need to be neither copied or reference-counted nor freed, even a boxed type would be overkill. While such objects can be used in GObject by simply treating them as opaque pointers (G_TYPE_POINTER), it is often a good idea to create a derived pointer type, documenting the fact that the pointers should reference a particular kind of object, even though nothing else is said about it.
Class and interface types
Most types in a GObject application will be classes — in the normal object-oriented sense of the word — derived directly or indirectly from the root class, GObject. There are also interfaces, which, unlike classic Java-style interfaces, can contain implemented methods. GObject interfaces can thus be described as mixins.

Closures
A GObject closure is a generalized version of a callback. Support exists for closures written in C and C++, as well as arbitrary languages (when bindings are provided). This allows code written in (for example) Python and Java to be invoked via a GObject closure.

Signals
Signals are the primary mechanism by which closures are invoked. Objects register signal listeners with the type system, specifying a mapping between a given signal and a given closure. Upon emission of a registered signal, that signal's closure is invoked. In GTK+, all native GUI events (such as mouse motion and keyboard actions) can generate GObject signals for listeners to potentially act upon.

Each GObject class is implemented by at least two structures: the class structure and the instance structure.

The main drawback of the GObject framework is its verbosity. Large amounts of boilerplate code, such as manual definitions of type casting macros and obscure type registration incantations, are necessary to create a new class. The GObject Builder, or GOB2, is a tool that attempts to remedy this problem by offering a template syntax reminiscent of Java. Code written using GOB2 is pre-processed into vanilla C code prior to compilation. Another compiler-to-C for the GObject type system is Vala, which uses a C#-style syntax.

The combination of C and GObject is used in many successful free software projects, such as the GNOME desktop, the GTK+ toolkit and the GIMP image manipulation program.

Though many GObject applications are written entirely in C, the GObject system maps well into the native object systems of many other languages, like C++, Java, Ruby, Python, Common Lisp, and .NET/Mono. As a result, it is usually relatively painless to create language bindings for well-written libraries that use the GObject framework.

Writing GObject code in C in the first place, however, is relatively verbose. The library takes a good deal of time to learn, and programmers with experience in high-level object-oriented languages often find it somewhat tedious to work with GObject in C. For example, creating a subclass (even just a subclass of GObject) can require writing and/or copying large amounts of boilerplate code.[6] However, using Vala, a language that is designed primarily to work with GObject and which converts to C, is likely to make working with GObject or writing GObject based libraries nicer.

Although they are not really first-class objects (there are no actual metatypes in GType), metaobjects like classes and interfaces are created by GObject applications at runtime, and provide good support for introspection. The introspective capabilities are used by language bindings and user interface design applications like Glade to allow doing things like loading a shared library that provides a GObject class—usually some kind of widget, in the case of Glade—and then obtain a list of all properties of the class, complete with type information and documentation strings.

Comparisons to other object systems

Since GObject provides a mostly complete object system for C, it can be seen as an alternative to C-derived languages such as C++ and Objective-C. (Though both also offer many other features beyond just their respective object systems.) An easily observed difference between C++ and GObject is that GObject (like Java) does not support multiple inheritance.

GObject's use of GLib's g_malloc() memory allocation function will cause the program to exit unconditionally upon memory exhaustion, unlike the C library's malloc(), C++'s new, and other common memory allocators which allow a program to cope with or even fully recover from out-of-memory situations without simply crashing. This tends to work against including GObject in software where resilience in the face of limited memory is important, or where very many or very large objects are commonly handled. The g_try_new() can be used when a memory allocation is more likely to fail (for a large object for example), but this cannot grant that the allocation will not fail elsewhere in the code.

Another important difference is that while C++ and Objective-C are separate languages, GObject is strictly a library and as such does not introduce any new syntax or compiler intelligence. For example, when writing GObject-based C code, it is frequently necessary to perform explicit upcasting. Hence, “C with GObject”, considered as a language separate from plain C, is a strict superset of plain C — like Objective C, but unlike C++.

On platforms where there is no standard ABI that works across all C++ compilers (which is not usually the case, since either the Itanium ABI or the Microsoft ABI are usually followed), a library compiled with one C++ compiler is not always able to call a library compiled with a different one. If such compatibility is required, the C++ methods must be exported as plain C functions, partly defeating the purpose of the C++ object system. The problem occurs in part because different C++ compilers use different kinds of name mangling to ensure the uniqueness of all exported symbols. (This is necessary because, for example, two different classes may have identically named member functions, one function name may be overloaded multiple times, or identically named functions may appear in different namespaces, but in object code these overlaps are not allowed.) In contrast, since C does not support any form of overloading or namespacing, authors of C libraries will typically use explicit prefixes to ensure the global uniqueness of their exported names. Hence, despite being object-oriented, a GObject-based library written in C will always use the same external symbol names regardless of which compiler is used.

Perhaps the most profound difference is GObject’s emphasis on signals (called events in other languages). This emphasis derives from the fact that GObject was specifically designed to meet the needs of a GUI toolkit. Whilst there are signal libraries for most object-oriented languages out there, in the case of GObject it is built into the object system. Because of this, a typical GObject application will tend to use signals to a much larger extent than a non-GObject application would, making GObject components much more encapsulated and reusable than the ones using plain C++ or Java. If using glibmm/gtkmm, the official C++ wrappers to Glib/GTK+ respectively, the sibling project libsigc++ allows easy use of underlying GObject signals using standard C++. Of course, other implementations of signals are available on almost all platforms, although sometimes an extra library is needed, such as Boost.Signals2 for C++.