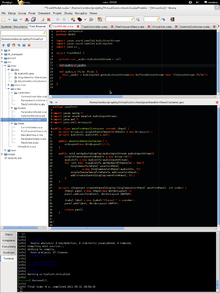 Geany (IPA:ʒeːniː) is a lightweight GUI text editor[3] using Scintilla and GTK+, including basic IDE features. It is designed to have short load times, with limited dependency on separate packages or external libraries on Linux. It has been ported to a wide range of operating systems, such as BSD, Linux, macOS,[4] Solaris and Windows. Because Windows lacks a virtual terminal equivalent, the Windows port lacks an embedded terminal window. Also missing from the Windows version are the external development tools present under Unix, unless installed separately by the user.[5] Among the supported programming languages and markup languages are C, C++, C#, Java, JavaScript, PHP, HTML, LaTeX, CSS, Python, Perl, Ruby, Pascal, Haskell, Erlang, Vala and many others.[6]

In contrast to traditional Unix-based editors like Emacs or Vim, Geany more closely resembles a small and fast IDE.

It is free software licensed under the terms of the GNU GPL version 2 or later.[2] After version 0.21 the next version was numbered 1.22 as requested by many users to reflect the maturity of the product.[7]