Denmark is a Nordic country located in Northern Europe. It consists of the Jutland peninsula and several islands in the Baltic sea, referred to as the Danish Archipelago. Denmark is located southwest of Sweden and due south of Norway and is bordered by the German state (and former possession) Schleswig-Holstein to the south, on Denmark's only land border, 68 kilometres (42 miles) long.

Denmark borders both the Baltic and North Seas along its 8,750 km (5,440 mi) tidal shoreline. Denmark's general coastline is much shorter, at 1,701 km (1,057 mi), as it would not include most of the 1,419 offshore islands (each defined as exceeding 100 square meters in area) and the 180 km long Limfjorden, which separates Denmark's second largest island, North Jutlandic Island, 4,686 km2 in size, from the rest of Jutland. No location in Denmark is further from the coast than 52 km (32 mi). The size of the land area of Denmark cannot be stated exactly since the ocean constantly erodes and adds material to the coastline, and because of human land reclamation projects (to counter erosion). On the southwest coast of Jutland, the tide is between 1 and 2 m (3.28 and 6.56 ft), and the tideline moves outward and inward on a 10 km (6.2 mi) stretch.[1]

A circle enclosing the same area as Denmark would be 742 km (461 miles) long. Denmark has 443 named islands (1,419 islands above 100 m²),[2] of which 72 are inhabited (as of 1 January 2007, Statistics Denmark). The largest islands are Zealand (Sjælland) and Funen (Fyn). The island of Bornholm is located east of the rest of the country, in the Baltic Sea. Many of the larger islands are connected by bridges; the Øresund Bridge connects Zealand with Sweden; the Great Belt Bridge connects Funen with Zealand; and the Little Belt Bridge connects Jutland with Funen. Ferries or small aircraft connect to the smaller islands. Main cities are the capital Copenhagen on Zealand; Århus, Aalborg and Esbjerg in Jutland; and Odense on Funen.

Denmark experiences a temperate climate. This means that the winters are mild and windy and the summers are cool. The local terrain is generally flat with a few gently rolling plains. The territory of Denmark includes the island of Bornholm in the Baltic Sea and the rest of metropolitan Denmark, but excludes the Faroe Islands and Greenland. Its position gives Denmark complete control of the Danish Straits (Skagerrak and Kattegat) linking the Baltic and North Seas. The country's natural resources include petroleum, natural gas, fish, salt, limestone, chalk, stone, gravel and sand. 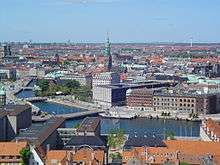 A large part of Denmark is highly urbanised, including Greater Copenhagen, the capital region.

The Danish landscape is characterised by flat, arable land and sandy coasts. 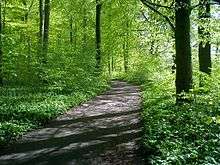 Beech is a common tree throughout Denmark, especially in the sparse woodlands. 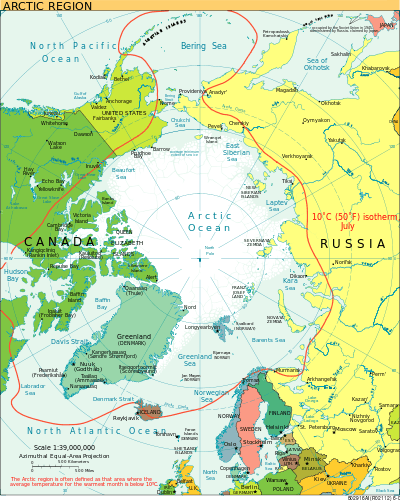 Map showing the location of Denmark including the Faroe Islands and Greenland (pdf), collectively know as The Danish Realm.

Media related to Geography of Denmark at Wikimedia Commons