In geometry, a heptadecagon or 17-gon is a seventeen-sided polygon.

A regular heptadecagon is represented by the Schläfli symbol {17}.

As 17 is a Fermat prime, the regular heptadecagon is a constructible polygon (that is, one that can be constructed using a compass and unmarked straightedge): this was shown by Carl Friedrich Gauss in 1796 at the age of 19.[1] This proof represented the first progress in regular polygon construction in over 2000 years.[1] Gauss's proof relies firstly on the fact that constructibility is equivalent to expressibility of the trigonometric functions of the common angle in terms of arithmetic operations and square root extractions, and secondly on his proof that this can be done if the odd prime factors of n are distinct Fermat primes, which are of the form

. Constructing a regular heptadecagon thus involves finding the cosine of

in terms of square roots, which involves an equation of degree 17—a Fermat prime. Gauss' book Disquisitiones Arithmeticae gives this as (in modern notation):[2]

The explicit construction of a heptadecagon was given by Herbert William Richmond in 1893. The following method of construction uses Carlyle circles, as shown below. Based on the construction of the regular 17-gon, one can readily construct n-gons with n being the product of 17 with 3 or 5 (or both) and any power of 2: a regular 51-gon, 85-gon or 255-gon and any regular n-gon with 2h times as many sides.

Another construction of the regular heptadecagon using straightedge and compass is the following:

The following simple design comes from Herbert William Richmond from the year 1893:[3]

The point N3 is very close to the center point of Thales' theorem over AF. 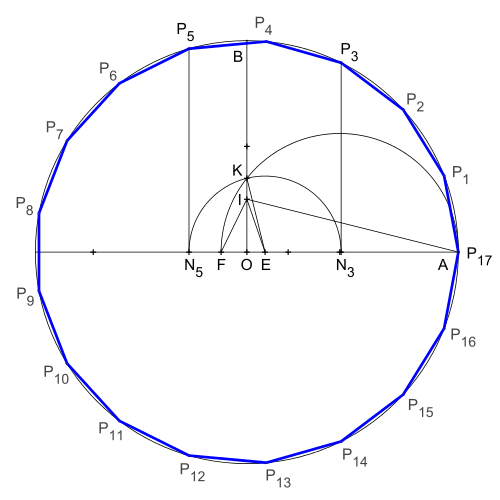 Construction according to H. W. Richmond

Construction according to H. W. Richmond as animation

Another more recent construction is given by Callagy.[2] 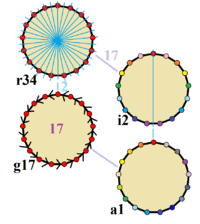 Symmetries of a regular heptadecagon. Vertices are colored by their symmetry positions. Blue mirror lines are drawn through vertices and edges. Gyration orders are given in the center.

The regular heptadecagon has Dih17 symmetry, order 34. Since 17 is a prime number there is one subgroup with dihedral symmetry: Dih1, and 2 cyclic group symmetries: Z17, and Z1.

These 4 symmetries can be seen in 4 distinct symmetries on the heptadecagon. John Conway labels these by a letter and group order.[4] Full symmetry of the regular form is r34 and no symmetry is labeled a1. The dihedral symmetries are divided depending on whether they pass through vertices (d for diagonal) or edges (p for perpendiculars), and i when reflection lines path through both edges and vertices. Cyclic symmetries in the middle column are labeled as g for their central gyration orders.

The regular heptadecagon is the Petrie polygon for one higher-dimensional regular convex polytope, projected in a skew orthogonal projection:

Contains a description of the construction.