In geometry, a heptagon is a seven-sided polygon or 7-gon.

The area (A) of a regular heptagon of side length a is given by:

This can be seen by subdividing the unit-sided heptagon into seven triangular "pie slices" with vertices at the center and at the heptagon's vertices, and then halving each triangle using the apothem as the common side. The apothem is half the cotangent of

and the area of each of the 14 small triangles is one-fourth of the apothem.

The exact algebraic expression, starting from the cubic polynomial x3 + x2 − 2x − 1 (one of whose roots is

in which the imaginary parts offset each other leaving a real expression. This expression cannot be algebraically rewritten without complex components, since the indicated cubic function is casus irreducibilis.

while the area of the circle itself is

thus the regular heptagon fills approximately 0.8710 of its circumscribed circle.

Heptagon with given side length: An animation from a neusis construction with marked ruler, according to David Johnson Leisk (Crockett Johnson)[2]

An approximation for practical use with an error of about 0.2% is shown in the drawing. It is attributed to Albrecht Dürer.[3] Let A lie on the circumference of the circumcircle. Draw arc BOC. Then

gives an approximation for the edge of the heptagon.

Example to illustrate the error: At a circumscribed circle radius r = 1 m, the absolute error of the 1st side would be approximately -1.7 mm 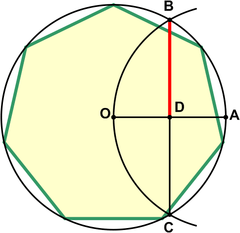 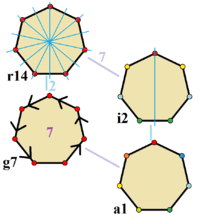 Symmetries of a regular heptagon. Vertices are colored by their symmetry positions. Blue mirror lines are drawn through vertices and edges. Gyration orders are given in the center.

The regular heptagon has Dih7 symmetry, order 14. Since 7 is a prime number there is one subgroup with dihedral symmetry: Dih1, and 2 cyclic group symmetries: Z7, and Z1.

These 4 symmetries can be seen in 4 distinct symmetries on the heptagon. John Conway labels these by a letter and group order.[4] Full symmetry of the regular form is r14 and no symmetry is labeled a1. The dihedral symmetries are divided depending on whether they pass through vertices (d for diagonal) or edges (p for perpendiculars), and i when reflection lines path through both edges and vertices. Cyclic symmetries in the middle column are labeled as g for their central gyration orders.

The regular heptagon's side a, shorter diagonal b, and longer diagonal c, with a<b<c, satisfy[5]:Lemma 1

Thus –b/c, c/a, and a/b all satisfy the cubic equation

However, no algebraic expressions with purely real terms exist for the solutions of this equation, because it is an example of casus irreducibilis.

A heptagonal triangle has vertices coinciding with the first, second, and fourth vertices of a regular heptagon (from an arbtrary starting vertex) and angles

Thus its sides coincide with one side and two particular diagonals of the regular heptagon.[5]

Two kinds of star heptagons can be constructed from regular heptagons, labeled by Schläfli symbols {7/2}, and {7/3}, with the divisor being the interval of connection. 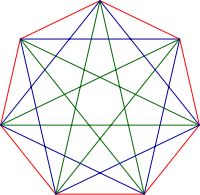 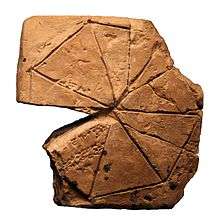 Geometry problem of the surface of a heptagon divided into triangles, on a clay tablet belonging to a school for scribs; Susa, first half of the 2nd millennium BCE

The United Kingdom currently (2011) has two heptagonal coins, the 50p and 20p pieces, and the Barbados Dollar is also heptagonal. The 20-eurocent coin has cavities placed similarly. Strictly, the shape of the coins is a Reuleaux heptagon, a curvilinear heptagon to make them curves of constant width: the sides are curved outwards so that the coin will roll smoothly in vending machines. Botswana pula coins in the denominations of 2 Pula, 1 Pula, 50 Thebe and 5 Thebe are also shaped as equilateral-curve heptagons. Coins in the shape of Reuleaux heptagons are also in circulation in Mauritius, U.A.E., Tanzania, Samoa, Papua New Guinea, São Tomé and Príncipe, Haiti, Jamaica, Liberia, Ghana, the Gambia, Jordan, Jersey, Guernsey, Isle of Man, Gibraltar, Guyana, Solomon Islands, Falkland Islands and Saint Helena. The 1000 Kwacha coin of Zambia is a true heptagon.

The Brazilian 25-cent coin has a heptagon inscribed in the coin's disk. Some old versions of the coat of arms of Georgia, including in Soviet days, used a {7/2} heptagram as an element.

In architecture, heptagonal floor plans are very rare. A remarkable example is the Mausoleum of Prince Ernst in Stadthagen, Germany.

Many police badges in the US have a 7:2 heptagram outline.

Apart from the heptagonal prism and heptagonal antiprism, no convex polyhedron made entirely out of regular polygons contains a heptagon as a face.

Regular heptagons can tile the hyperbolic plane, as shown in this Poincaré disk model projection: 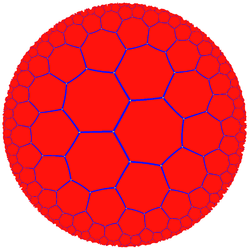 The K7 complete graph is often drawn as a regular heptagon with all 21 edges connected. This graph also represents an orthographic projection of the 7 vertices and 21 edges of the 6-simplex. The regular skew polygon around the perimeter is called the petrie polygon.