A regular pentadecagon is represented by Schläfli symbol {15}.

A regular pentadecagon has interior angles of 156°, and with a side length a, has an area given by

A regular triangle, decagon, and pentadecagon can completely fill a plane vertex.

Comparison the construction according Euclid in this image: Pentadecagon

In the construction for given circumcircle:

is a side of equilateral triangle and

is a side of a regular pentagon.[2] The point

Compared with the first animation (with green lines) are in the following two images the two circular arcs (for angles 36° and 24°) rotated 90° counterclockwise shown. They do not use the segment

, but rather they use segment

for the second circular arc (angle 36°). 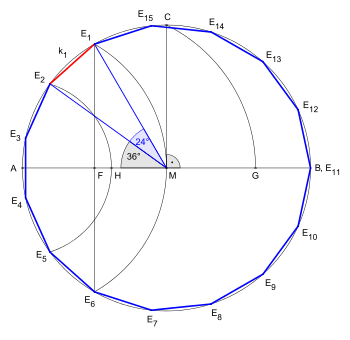 A compass and straightedge construction for a given side length. The construction is nearly equal to that of the pentagon at a given side, then also the presentation is succeed by extension one side and it generates a segment, here

which is divided according to the golden ratio. 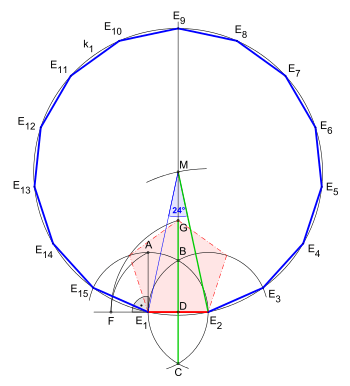 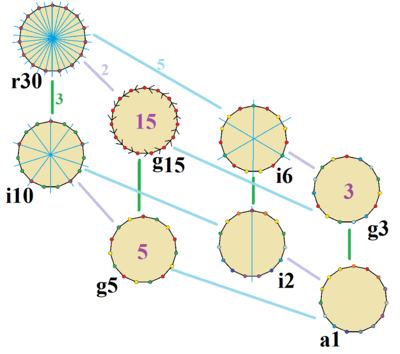 The symmetries of a regular pentadecagon as shown with colors on edges and vertices. Lines of reflections are blue. Gyrations are given as numbers in the center. Vertices are colored by their symmetry positions.

There are 3 regular star polygons: {15/2}, {15/4}, {15/7}, constructed from the same 15 vertices of a regular pentadecagon, but connected by skipping every second, fourth, or seventh vertex respectively.

The regular pentadecagon is the Petrie polygon for some higher-dimensional polytopes, projected in a skew orthogonal projection:

It is also the Petrie polygon for the great 120-cell and grand stellated 120-cell.