Hida Province (飛騨国, Hida no kuni)[1] is an old province located in the northern part of Gifu Prefecture.[2] It was sometimes called Hishū (飛州). The province was in the Tōsandō area of central Honshu.

Hida Province's castle town was Takayama. Hida had extensive forests and was a major source of timber and metals for other provinces. River traffic from Hida down to Mino and Owari Provinces was heavy. 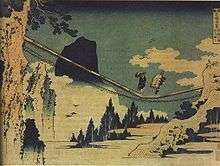 The bridge of Hida

In 1585, Kanamori Nagachika, one of Oda Nobunaga's and later Toyotomi Hideyoshi's generals, was sent to occupy Hida Province and became its lord. He fought on the side of Tokugawa Ieyasu at the Battle of Sekigahara and his heirs held the province through the Edo Period.

Currently, the entire area of the former Hida Province consists of the cities of Gero, Hida and Takayama; and the village of Shirakawa, Ōno District.