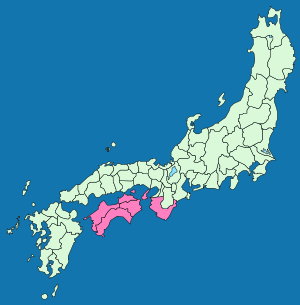 Nankaidō (南海道, literally, "southern sea circuit" or "southern sea region") is a Japanese geographical term.[1] It means both an ancient division of the country and the main road running through it.[2] The road connected provincial capitals in this region.[3] It was part of the Gokishichidō system.

The Nankaidō encompassed the pre-Meiji provincial lands of Kii and Awaji, plus the four provinces that made up the island of Shikoku: Awa, Sanuki, Tosa, and Iyo.[4]

The road extend from Nara to the seacoast to the south on the Kii Peninsula of the island of Honshū in Japan and crossing the sea, extended to Yura (nowadays Sumoto) and then Shikoku.

See Historic tsunami for a full list of Nankai quakes with tsunami.

Many historic earthquakes bear the name "Nankai" or "Nankaido", as specific epicenters were known at the time. Often quakes take on the Japanese era name along with location such as Nankaido. These include: