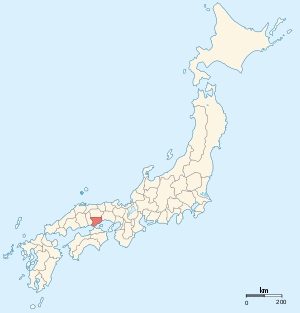 Bizen Province (備前国, Bizen-no kuni) was a province of Japan on the Inland Sea side of Honshū, in what is today the southeastern part of Okayama Prefecture.[1] It was sometimes called Bishū (備州), with Bitchū and Bingo Provinces. Bizen borders Mimasaka, Harima, and Bitchū Provinces.

Bizen's original center was in the modern city of Okayama. From an early time Bizen was one of Japan's main centers for sword smithing.

In the 3rd month of the 6th year of the Wadō era (713), the land of Bizen-no kuni was administratively separated from Mimasaka Province (美作国). In that same year, Empress Gemmei's Daijō-kan continued to organize other cadastral changes in the provincial map of the Nara period.

In the Muromachi period, Bizen was ruled by the Akamatsu clan from Mimasaka, but by the Sengoku period the Urakami clan had become dominant and settled in Okayama city. They were later supplanted by the Ukita clan, and Ukita Hideie was one of the regents Toyotomi Hideyoshi appointed for his son. After Kobayakawa Hideaki helped Tokugawa Ieyasu to win the Battle of Sekigahara over Ukita and others, he was granted Ukita's domains in Bizen and Mimasaka.

Bizen passed through a variety of hands during the Edo period before being incorporated into the modern prefecture system.

Kitbitsuhiko jinja was the chief Shinto shrine (ichinomiya) of Bizen. [3]