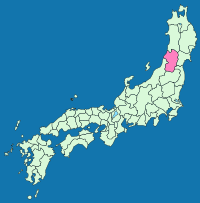 Map of the former Japanese provinces with Uzen highlighted

Uzen Province (羽前国, Uzen-no kuni) is an old province of Japan in the area of Yamagata Prefecture (consisting mostly minus Akumi District).[1] It was sometimes called Ushū (羽州), with Ugo Province.

This province was in the Tōhoku region of Honshū island. It was the place where the Mogami clan was established.