"Doshu" redirects here. For the head of the Aikikai, see Aikikai § Doshu. 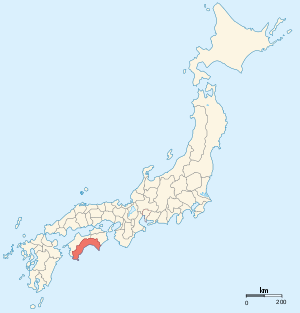 Tosa Province (土佐国, Tosa no kuni) is a former province of Japan in the area that is today Kōchi Prefecture on Shikoku.[1] Tosa was bordered by Iyo and Awa Provinces. It was sometimes called Doshū (土州) .

The ancient capital was near modern Nankoku. Tosa jinja was designated as the chief Shinto shrine (ichinomiya) for the province. [2]

Tosa was ruled by the Chōsokabe clan during the Sengoku period, and Chōsokabe Motochika briefly unified Shikoku under his rule, although he was reduced to Tosa again by Toyotomi Hideyoshi and dispossessed entirely after Sekigahara. The province was then granted to Yamauchi Kazutoyo. Tosa was a relatively poor province, and lacked a strong castle town even under the Chōsokabe. After Sekigahara, the castle town of Kōchi was established and remains the main city to this day. During the Edo Period the province was controlled by the Tosa Domain.

Sakamoto Ryōma of the Bakumatsu era was born in Tosa.

Samurai from Tosa were important in the Meiji Restoration of 1868.[1]

The Imperial Japanese Navy battleship Tosa, lead ship of its class, was named after the province.