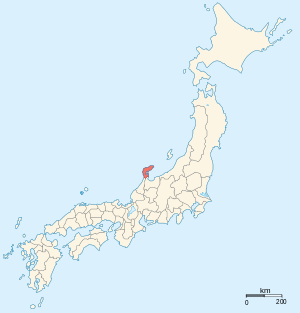 Noto Province (能登国, Noto no Kuni) was an old province in the area that is today the northern part of Ishikawa Prefecture in Japan, including the Noto Peninsula (Noto-hantō) which is surrounded by the Sea of Japan.[1] It was sometimes called Nōshū (能州). Noto bordered on Etchū and Kaga provinces. The ichinomiya of the province was Keta Shrine.

Nanao, Ishikawa was the ancient capital and the main castle town of Noto. For much of the Sengoku Period Noto was ruled by a minor branch of the Maeda clan of Kaga.