Tourism is the primary economic generator for the area, contributing several million dollars per year to the county and providing 600 full-time and 700 part-time jobs for local residents. The area is host to over 4 million visitors a year. There are 400 guestrooms in hotels, motels and bed and breakfasts, vacation cabin rentals, condos, and rustic cabin lodges and resorts. The Lake Arrowhead community is home to the Lake Arrowhead Country Club and Golf Course. The area is also popular for business conferences. 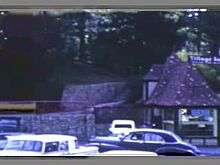 As a scenic mountain resort in the San Bernardino Mountains, Lake Arrowhead's economy is almost completely supported by tourism, both by casual vacationers and part-time residents. The primary tourism industries include real estate, lodging, dining, recreation, and retail sales.

While Lake Arrowhead has no official town center, the Lake Arrowhead Village serves as the main commercial area for both locals and tourists and includes a number of factory outlets, boutiques, restaurants, post office and a supermarket. Lake Arrowhead Village also hosts events all year long including a free Summer Concert Series, the county's largest free Oktoberfest and many other themed events such as car shows, dog shows, the Tour de Lake Arrowhead, Home Expo, and the popular Antique Wooden Boat Show.

The University of California, Los Angeles operates the nearby UCLA Conference Center, a full-service conference facility with lodging and meeting space. Other major employers include Mountains Community Hospital, Rim of the World Unified School District, and Above It All Treatment Center.[3]

Logging in the San Bernardino Mountains was once done on a large scale, with the Brookings Lumber Company operation one of the largest. It operated on 8,000 acres (32 km2) between Fredalba and Hunsaker Flats (present-day Running Springs), between 1899 and 1912. It built a logging railroad to bring logs to the mill at Fredalba. The Shay locomotives had to be disassembled and hauled by wagon up the mountain, since the railroad operated in the high country but did not connect to other railroads in lowlands. Finished lumber was hauled by wagon down the steep grades to the Molino Box Factory in Highland, CA.[4][5][6][7] 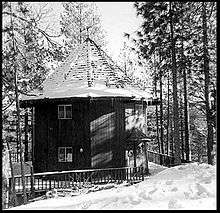 Santa's Village at Lake Arrowhead was a popular theme park from 1955 to 1998, and reopened in 2016. It was the first franchised one in the United States, with two others in the Santa Cruz Mountains and Ohio.[10][11]

According to the 2010 United States Census, Lake Arrowhead had a median household income of $57,672, with 11.2% of the population living below the federal poverty line.[13]

There were 3,243 households, of which 37.3% had children under the age of 18 living with them, 62.6% were married couples living together, 8.9% had a female householder with no husband present, and 24.6% were non-families. Of all households 18.7% were made up of individuals and 6.0% had someone living alone who was 65 years of age or older. The average household size was 2.8 and the average family size was 3.2.

In the United States House of Representatives, Lake Arrowhead is in California's 8th congressional district, represented by Republican Paul Cook.[16] In the Senate, California is represented by Barbara Boxer (D) and Dianne Feinstein (D).[17]

The Lake Arrowhead Community has a unique climate for Southern California with four distinct seasons which support an array of outdoor recreational activity and year round beauty. Lake Arrowhead has a Warm-summer Mediterranean climate (Köppen climate classification Csb). During the summer, warm temperatures and monsoon thunderstorms are common. During the winter months, large pacific storms bring plenty of snow. The area receives about 300 annual days of sunshine per year. Beginning in late 2011, a catastrophic drought began effecting Lake Arrowhead along with the rest of California. By November 2016, the lake level dropped 11 feet 10 inches. This drop exposed much of the lake floor and beached most of the docks. [18]

The Lake Arrowhead Communities have numerous cultural events and organizations. The Arrowhead Arts Association is a non-profit corporation dedicated to cultural enrichment sponsoring quality musical performances and providing musical education and scholarships for local youth from preschool through college. The Mountain Skies Astronomical Society is also located there.