Le Tréport is a commune in the Seine-Maritime department in the Haute-Normandie region in north-eastern France.

A small fishing port and light industrial town situated in the Pays de Caux, some 21 miles (34 km) northeast of Dieppe at the junction of the D 940, the D 78 and the D 1015 roads. The mouth of the Bresle river meets the English Channel here, in between the high (110 metres) chalk cliffs and the pebbly beach. Le Tréport is also a sea-side resort and home to a casino.

Aerial view of the town

A view of the town 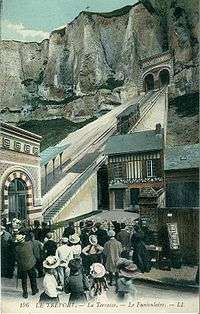 The three towns of Le Tréport, Eu and Mers-les-Bains are known locally as the Three sisters.

Le Tréport was used as the location for the 2014 French police thriller Witnesses ("Les témoins"). The series, which was written by Hervé Hadmar and Marc Herpoux, starred Thierry Lhermitte and Marie Dompnier. Its style and tempo have been compared to Scandinavian noir such as Wallander, The Bridge and The Killing.