The Nilgiri Mountain Railway is a railway in Tamil Nadu, India, built by the British in 1908,[1] and was initially operated by the Madras Railway. The railway relies on its fleet of steam locomotives.[2] NMR comes under the jurisdiction of the newly formed Salem Division.

In July 2005, UNESCO added the Nilgiri Mountain Railway as an extension to the World Heritage Site of Darjeeling Himalayan Railway, the site then became known as "Mountain Railways of India"[3] after it satisfied the necessary criteria, thus forcing abandonment of the modernisation plans.

For the past several years diesel locomotives have taken over from steam on the section between Coonoor and Udhagamandalam. Local people and tourists have led a demand for steam locomotives to once again haul this section.[2]

A still from the documentary on NMR.[4]

Functioning of the rack and pinion

Rack seen between the two tracks 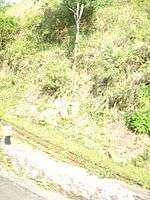 Between Mettupalayam and Coonoor, the line uses the Abt rack and pinion system to climb the steep gradient. On this rack section trains are operated by 'X' Class steam rack locomotives manufactured by the Swiss Locomotive and Machine Works of Winterthur in Switzerland.

These steam locomotives can be used on any part of the line (either with or without the rack section),but the newer diesel locomotives can operate on the entire section, between Mettupalayam and Udagamandalam.This signals the beginning of the process to phase out the coal-fired vintage Swiss engines that took scores of passengers on the rack and pinion track to Coonoor and Udhagamandalam, covering 45.8 kilometres (28 mi), 108 curves, 16 tunnels and 250 bridges

Hence, the Southern Railway decided to replace the coal-fired locomotives. The work was entrusted to Golden Rock Workshop of Southern Railway at Tiruchirapalli. Each of the new engines weighs a little over 50 tonnes and cost Rs.10 crore.

The new engine has been provided with pilot and primary burners with separate tanks to hold about 850 litres (190 imp gal; 220 US gal) of diesel and 2,250 litres (490 imp gal; 590 US gal) of furnace oil. The hauling capacity of this new engine is 97.6 tonnes (96.1 long tons; 107.6 short tons) and it can run at a speed of 30 kilometres per hour (19 miles per hour) in plains and at 15 kilometres (9.3 miles) an hour on a gradient.The arrival of the new engines has eliminated the disruption in service that occurred frequently over the last few years.

For long, the X Class locomotives manufactured by Swiss Locomotive and Machine Works of Winterthur in Switzerland lent that distinct charm to NMR. These locomotives are six to eight decades old, railway officials said

The steam locomotives are always marshalled at the downhill (Mettupalayam) end of the train. The average gradient in this rack section is 1 in 24.5 (4.08%), with a maximum of 1 in 12 (8.33%). Between Coonoor and Udagamandalam the train is operated by a YDM4 diesel locomotive using conventional rail adhesion principles. On this section the locomotive is always at the Coonoor end of the train as although the line is not steep enough to need a rack rail, the ruling gradient out of Coonoor is still very steep at 1 in 25 (4%).

Even though the NMR stations have networked computerised ticketing systems for onward journeys, it still issues Edmondson style manual tickets for the Ooty-Mettupalayam journey to preserve the 'World Heritage Site' status of the railway. However, ticket booking is similar to other conventional trains and can also be done via the Indian Railways' website. It is advisable to book tickets for this railway well in advance, especially during peak season.

The majority of repairs to the locomotives are carried out at the Coonoor shed but many of the steam locomotives have been rebuilt at the Golden Rock Workshops. Carriages are repaired at Mettupalayam but, like the locomotives, are taken to one of the big railway workshops for major work.

Due to its popularity, a number of passengers using the NMR have requested that the Southern Railways convert the section from Coonoor to Udagamandalam to steam locomotive, extending the present steam traction between Mettupalayam and Coonoor.

Udhagamandalam railway station, familiarly known as "Ooty station", has preserved much of its equipment from the railway heyday of the Raj. In addition to the original 1908 building, it still has an operational water dispenser for steam locomotives, and a weighing scale made in 1907 by Hendry Boomley & Son of Birmingham.[5]

Station with the 5 ft 6 in (1,676 mm) line from Coimbatore Junction. Passengers cross the platform to board the Nilagiri Passenger train (NMR). There is a small locomotive shed here and also the carriage workshops for the line. 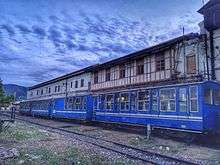 Leaving Mettupalayam, the line is adhesion worked and actually drops for a short distance before crossing the Bhavani River, after which it starts to climb gently.

Closed as a passenger station, this is where the rack rail begins. As the train leaves the station, the gradient is 1 in 12 (8.33%).

Closed as a passenger station but is still a water stop.

Block post and water stop, also has refreshments for passengers.

Closed as a passenger station but is still a water stop.

Closed as a passenger station, trains do not stop here.

Main intermediate station on the line at site of the locomotive workshops as well as the top end of the rack rail. Trains must reverse a short distance before continuing their climb to Ooty. It is normal for the locomotive to be changed here with diesel traction, being normal for all trains to Ooty.

From a short distance before Lovedale, the line descends into Ooty.

In the UK, the BBC made a series of three documentaries[6] dealing with Indian Hill Railways, with the NMR being featured in the second programme shown in February 2010. (The first film covers the Darjeeling-Himalayan Railway and the third the Kalka-Shimla Railway.) The films were directed by Tarun Bhartiya, Hugo Smith and Nick Mattingly, and produced by Gerry Troyna. The series won the UK Royal Television Society Award in June 2010.[7]

Coonoor station was one of two used as locations in David Lean's film A Passage to India. [8] You can also see Coonoor station and its heritage locomotive in many of the Indian films. Wellington station always finds a place in most of the films casting the Indian army or army training storyline mainly due to the MRC Indian Army Regiment, Defence Services Staff College, the Cantonment and the Cordite Factory.

Ketti station was used as the location in a Malayalam film Summer in Bethlehem Lovedale station is very picturesque and has featured in many popular films including the famous Tamil hit, Moonram Pirai. The famous Hindi song Chaiyya Chaiyya from the film "Dil Se" featuring Shahrukh Khan & Malaika Arora Khan was shot on the roof top of NMR. Ooty station has featured in many of the Tamil and other South Indian language films. It is also prominently featured in some of the Bollywood films.