Antonin Magne (pronounced: [ɑ̃.tɔ.nɛ̃ maɲ]; 15 February 1904 – 8 September 1983) was a French cyclist who won the Tour de France in 1931 and 1934. He raced as a professional from 1927 to 1939 and then became a team manager. The French rider and then journalist, Jean Bobet, described him in Sporting Cyclist as "a most uninterviewable character" and "a man who withdraws into a shell as soon as he meets a journalist." His taciturn character earned him the nickname of The Monk when he was racing.

Magne first rode the Tour in 1927, alongside André Leducq in the France team. His two victories in the Tour had a dramatic quality because of the crashes, falls, bad luck and competition that he faced. He crashed in 1931 and was repeatedly attacked by the Italian Pesanti and the Belgian, Jef Demuysere. He finished the race so exhausted that he didn't start again next year. In 1934 he won again with the help of René Vietto, Georges Speicher and Roger Lapébie. Magne was the first rider to win a time trial in the Tour de France, over 80 km from La Roche-sur-Yon to Nantes in 1934.

In 1936 he came second in the Tour and then won the world championship on the road.

He won the Grand Prix des Nations, the unofficial world championship of the individual time trial, in 1934, 1935 and 1936.

Magne led from the second day and his team won 19 of the 23 stages. His hopes looked over when he broke a wheel on the descent from l'Hospitalet to Ax-les-Thermes in the Pyrenees. He was rescued by the youngest rider in his team, René Vietto, who handed him his own wheel despite being in third place himself. Next day Magne again had trouble. Vietto was just ahead of him on the Col de Portet d'Aspet, turned and saw his leader waving a wheel and rode back down the hill to hand him his own. Vietto wept by the roadside as he waited for another wheel. Magne won the Tour and France dominated it but Vietto, who finished fifth, was the hero.

Upon retirement, Magne became a directeur sportif for several successful riders, such as Louison Bobet and Raymond Poulidor in the Mercier team. He is credited with being a mentor to the great riders of the era, and is considered to be one of the best directeurs sportif in the sport. He never referred to his riders by the informal "tu" but always as "vous"; riders addressed him a "Monsieur Magne". Louis Caput replaced Antonin Magne as manager of Fagor-Mercier in 1970.

Magne lived for much of his life at Livry-Gargan, in the département of Seine-Saint-Denis near Paris. In 2004, the Tour de France honoured the centenary of his birth with a stage finish there. Magne was made a Chevalier de la Légion d'Honneur in 1962. 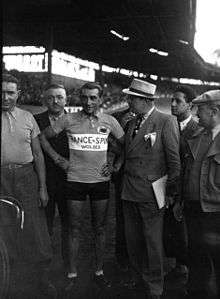