Later he would manage the Italian National team. Under him, Fausto Coppi, Gino Bartali and Gastone Nencini all triumphed at the Tour de France.

Binda was born in Cittiglio near Varese but moved to Nice, in southern France as a teenager. He found work with his uncle as an apprentice plasterer, but he and brother Primo spent their free time cycling. He began racing in September 1921, aged 19. He won his first race (though he was subsequently disqualified) and it was clear from the outset that he was immensely gifted as both time trialist and climber.

Binda was a trained trumpet player, and was nicknamed "Trombettiere di Cittiglio" ("The Trumpeter of Cittiglio").[3]

Enticed by a 500 lire King of the Mountains prize on the Ghisallo climb, Binda rode from Nice to Milan in order to compete in the 1924 Tour of Lombardy. He won the prize, finished fourth in the race, and was immediately offered a contract with the Legnano professional team.

The 1925 Giro d'Italia was to be the last of the legendary campionissimo Costante Girardengo. All of Italy hoped he would prevail, and his defeat at the hands of Binda, a 23-year-old Giro debutant, was deeply unpopular. In the event Girardengo resolved to continue racing, and the two of them developed a caustic, deeply personal rivalry. As Girardengo's powers waned, Italians looked to Domenico Piemontesi to usurp Binda but, much like everyone else, he was hopelessly out of his depth against the fuoriclasse.

In 1929 Girardengo "discovered" a prodigiously strong track rider from Veneto, Learco Guerra. He famously anointed him as his heir apparent, a new "anti-Binda". Guerra closely resembled Girardengo as a cyclist, and was hugely popular. He enjoyed the support of the Italian Fascist Party, and by extension the press and wider sporting public. Binda, on the other hand, famously declared that he'd no interest in producing spettacolo. Rather he was simply in the business of winning bike races, and each time he defeated Guerra the Italian public's antipathy grew. Whilst Guerra was homespun, expansive and open, Binda was perceived as cold and detached, pompous even.

So dominant was he that the Gazzetta dello Sport offered him 22,500 lire to miss the Giro of 1930. Instead, he took part in that year's Tour de France, winning two stages. Not until 1932, when he won a third Cycling World Championship in Rome, did the public start to warm to him. By then he had redefined both training and racing methodology, and was inarguably the greatest cyclist ever to have lived.

In the World Championships, Binda was also very successful. He won the title three times in 1927, 1930 and 1932 (a record later equalled by Rik Van Steenbergen, Eddy Merckx and Óscar Freire). In addition, he placed third in 1929. By the time he retired he had won over 120 races, including the Italian Championships four times.

Società Ciclistica Alfredo Binda is named in his honor.[4] 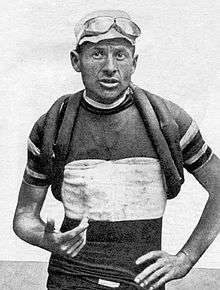