Paolo Bettini (born 1 April 1974 in Cecina, Livorno, Tuscany) is an Italian former champion road racing cyclist, and the former coach of the Italian national cycling team. Considered the best classics specialist of his generation, and probably one of the strongest of all times, he won gold medals in the 2004 Athens Olympics road race and in the 2006 and 2007 World Road Race Championships. He is nicknamed Il Grillo ("the cricket") for his repeated sudden attacks and his sprinting style.

Paolo Bettini lived with his family on the Tuscany coast. He began racing when he was seven and won 23 of his first 24 races.[1] His first bike had a secondhand frame which his father, Giuliano, had painted orange. The components were cannibalised from other bikes.[1] He started racing after the encouragement of his brother.[2]

He came fourth in the world under-23 road championship in 1996, behind three other Italians, Giuliano Fugeras, Roberti Sgambelluri and Luca Sironi.[3] He turned professional the following year for the MG-Technogym team. There he rode as domestique to Michele Bartoli, "a working class cyclist," wrote Stephen Farrand, "destined to work for others to earn his crust."[1] He worked for Bartoli, who in return helped with advice.[3] Bartoli won the World Cup in 1997 and 1998 with Bettini's help.

Paolo Bettini in the Tour of California 2007.

Bartoli fell heavily on a knee in 1999 and Bettini was freed to race for himself.[4] He won Liège–Bastogne–Liège in 2000 – treating himself to a €100,000 Porsche[1] – and a flat stage of that year's Tour de France, from Agen to Dax. He won the 2001 Züri-Metzgete after a few months without wins, beating Jan Ullrich in the sprint to the finish. His success led to a feud with Bartoli. It culminated in the 2001 world championship in Lisbon, Portugal, where Bartoli refused to lead Bettini to a flying start in the sprint finish and the Spaniard, Óscar Freire, won instead.

The 2002 season was a breakthrough. In the World Cup, Bettini was caught in the final kilometers of Milan–San Remo. After his 1-2 win with Stefano Garzelli in Liège–Bastogne–Liège, Bettini ran neck-to-neck against Museeuw, who won Paris–Roubaix in a 50 km solo breakaway, and the HEW Cyclassics. A tactical ride in Giro di Lombardia earned Bettini the World Cup.

The 2003 World Cup series started with Milan–San Remo. Attacking twice in the last hills leading down to the Primavera, Bettini had the help of Luca Paolini, who attacked down the tricky descent towards the finish.

However, injury in the Gent–Wevelgem forced Bettini to miss several races until the Tour de France in July.[5] He then followed with a win in the HEW Cyclassics in front of Tour runner-up Jan Ullrich, and a win in the Clásica de San Sebastián.

Bettini failed to win the UCI Road Cycling World Championship despite being favorite due to a mistake at the end of the race. Having established himself in the winning breakaway, hesitation allowed the Spaniard Igor Astarloa to break away to win. Astarloa claimed that Bettini had offered him money to relinquish the win, which Astarloa said he refused. A feud ensued, and Astarloa attributed his comment to a misunderstanding of Bettini's Italian.[6] 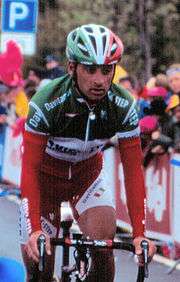 The 2004 season started well with Milan–San Remo, but Davide Rebellin won the La Flèche Wallonne (not in the World Cup), Liège–Bastogne–Liège and Amstel Gold Race. Bettini's disappointments continued with second places in the HEW Cyclassics, which he had won previously, and in the Clásica de San Sebastián, which he had won the previous year. The points gained in Paris–Tours put him in the leader's jersey, but with the last race the Giro di Lombardia better suited to Rebellin, the World Cup was not yet safe. Bettini followed Rebellin throughout the race, resulting in Rebellin's quitting in frustration.

Bettini's most important victory was the 2004 Summer Olympics, where he broke away with Sergio Paulinho for a comfortable victory. He again failed to win the world championship due to an injury when he banged his knee against the team car at the beginning of the race.

After Milan–San Remo, Bettini had an injury-marked start which prevented significant participation in the spring classics, and he had no victories until he got two stage wins at the 2005 Giro d'Italia, where he wore the maglia rosa for several days. After that, no more good results until the 2005 Vuelta a España, where he beat Alessandro Petacchi in an uphill sprint in Valladolid. After that, he took part in the world championship in Madrid, where he got into the decisive break but did not get a medal. A week later, he won Züri-Metzgete for a second time. Two weeks later he won the Giro di Lombardia as well. 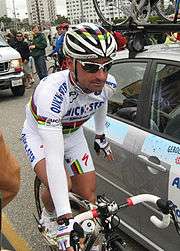 Paolo Bettini in the World Champion's jersey in February 2007.

Bettini won the first race of the season, the Trofeo Soller, which is part of the Challenge Mallorca. He also won the Gran Premio di Lugano, two stages in the Tirreno–Adriatico and the 15th stage in the Giro d'Italia, where he won the points classification. Following the Giro he became the Italian road champion and won a stage at the Vuelta a España before winning the world championship.

His brother Sauro died in a car accident a few days after that victory and Bettini was close to abandoning cycling. He changed his mind and won the Giro di Lombardia in tears.

Bettini raced in the second annual 2.HC-rated 2007 Tour of California and made it worth his while by capturing Stage 4 in a sprint finish. He later won the third stage of the Vuelta a España and finished second in three more stages. Then he won once again the rainbow jersey of the Elite Men's Road at Stuttgart.

Paolo Bettini at the 2008 Giro d'Italia.

Bettini's start was plagued by injuries, including a fall at the Kuurne–Brussels–Kuurne and a rib broken when he fell on a wet descent in the Tour of the Basque Country.[8] He won the Trofeo Matteoti and stages at the Tour of Austria and Tour de Wallonie. He also won two stages at the Vuelta a España, where he said he was leaving Quick Step after 10 years due to a financial dispute.[9] On September 27 he announced his retirement.[10] On 4 November, he fell during the Milan six-day and was taken to hospital uncounscious.[11]

On 17 June 2010, Bettini was named as the new Italian national coach, following the death of Franco Ballerini in a car accident earlier that year.[12] He left this role in 2014 to work with Fernando Alonso on his new cycling team in preparation for its launch in 2015.[13]

Bettini followed the path of riders before the 1970s and took up six-day racing in the winter. He rode at Munich and Grenoble in 2006. "I didn't do it for the money," he said. "I had that already. I did it through my love of racing, to see what it's like to race on a track."[4] The bankings proved trickier than the road, however, and his debut was described as "catastrophic" as he failed to get alongside his partner in the two-man relay race, the madison, and finished the first night "with fear in his face."[4] Charly Mottet said:

I saw him at the start of the evening and he worried me. Two hours later, I can tell you, he had won the respect of the others. He was making proper changes,[14] he was taking part in the race and he was going better and better. The others couldn't believe their eyes [commencaient à ne plus voir le jour].[4]

Bettini married Monica Orlandini, a literature teacher, in 2000. They moved into a farmhouse belonging to his wife's family, who have been olive farmers for four generations.[2] They live in Riparbella, 10 km from Cecina, where Bettini was born.

This table shows Bettinis results in the five cycling monuments.