The organisers of the Tour, Amaury Sport Organisation (ASO), felt that it was no longer safe to have 198 cyclists in the race, as more and more traffic islands had been made, so the total number of teams was reduced from 22 to 20,[1] composing of 9 cyclists.[2] The first 14 teams were selected in May 1993, based on the FICP ranking.[3] In June 1993, six additional wildcards were given; one of which was given to a combination of two teams, Chazal–Vetta–MBK and Subaru.[4] The Subaru team did not want to be part of a mixed team, so Chazal was allowed to send a full team.[5]

The defending champion Miguel Indurain was the big favourite, having won the 1993 Giro d'Italia earlier that year.[6]

The route was unveiled in October 1992. Most team directors expected it to be more difficult than the 1992 Tour de France.[1]

The group containing Miguel Indurain, wearing the yellow jersey as leader of the general classification, on the Col du Galibier in stage ten 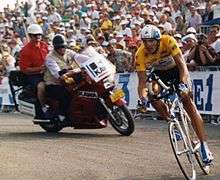 The 1993 Tour started in the same way as the 1992 Tour: Indurain won, with Alex Zülle in second place.[6] The next stages were flat, and all finished in mass sprints. After the second stage, sprinter Wilfried Nelissen had collected enough time bonuses to become leader in the general classification.[6]

The team time trial in stage four was the first stage with significant effects on the general classification. Banesto (Indurain's team) came in seventh, losing more than one minute, but the biggest loser was Tony Rominger, whose Clas team lost more than three minutes.[6]

The contenders for the overall victory saved their energy in the next few stages, and cyclists who would not be a threat in the mountains were allowed to break away, with only the sprinters' teams trying to get them back. The sixth stage was run with an average speed of almost 49.5 kilometres per hour (30.8 mph), at that moment the fastest mass-start stage in the Tour.[6]

The next stages were in the Alps. Tony Rominger attacked, trying to win back time. Although he was able to win the stage, Indurain had followed him closely, so Rominger did not win back any time. Other pre-race favourites lost considerable time this stage and were no longer in contention, such as Claudio Chiappucci, who lost more than eight minutes.[6]

In the eleventh stage, Rominger tried it again. But again, Indurain stayed with him. Rominger won the stage again, but the margin to Indurain stayed the same. Rominger did jump to the fourth place in the general classification, because Erik Breukink lost almost ten minutes.[6]

The next three stages were relatively flat, and the top of the general classification stayed the same. In the fifteenth stage, Pyrenean climbs were included. The stage was won by Oliverio Rincón, the only survivor of an early breakaway. Behind him, Rominger again tried to get away from Indurain, but was unable to do so.[6]

In the sixteenth stage, again in the Pyreneés, Rominger was finally able to get away from Indurain, but the margin was only three seconds. The seventeenth stage was the last stage with serious climbs, so the last realistic opportunity to win back time on Indurain, but this did not happen, so it seemed certain that Indurain would become the winner.[6]

The rest of the podium was determined in the individual time trial in stage 19. It was won by Rominger, with Indurain in second place. Rominger thus climbed to the second place in the general classification.

There was also a mountains classification. The organisation had categorized some climbs as either hors catégorie, first, second, third, or fourth-category; points for this classification were won by the first cyclists that reached the top of these climbs first, with more points available for the higher-categorized climbs. The cyclist with the most points lead the classification, and was identified with a polkadot jersey.[10]

For the team classification, the times of the best three cyclists per team on each stage were added; the leading team was the team with the lowest total time.[11]

For the combativity award classification, a jury gave points after each stage to the cyclists they considered most combative. The cyclist with the most votes in all stages lead the classification. The fair-play award was given to Gianni Bugno.[2]