The Italian National Road Race Championships are held annually. They are a cycling race which decides the Italian cycling champion in the road racing discipline, across several categories of rider. The event was first held in 1906 and was won by Giovanni Cuniolo. At the beginning there were often back-to-back wins from many riders. Costante Girardengo made the remarkable achievement of 9 wins between 1913 and 1925. Perhaps if it were not for the First World War, which blocked the running of the championship for four years, from 1915 until 1918, Girardengo would have gained additional victories. Despite this, he also holds the record for most consecutive wins, with 7. After his winning streak ended, another Italian cycling legend, Alfredo Binda, won 4 races in a row. Learco Guerra succeeded him with 5 consecutive wins. Since then the event has not been dominated to the same extent, although Fausto Coppi claimed 4 victories. Recent multiple victors have included Giovanni Visconti, Paolo Bettini, Salvatore Commesso, Massimo Podenzana and Gianni Bugno. The current champion is Vincenzo Nibali. None of the road champions have also managed to win the time trial race. 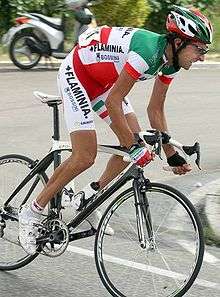 Filippo Simeoni with the tricolor jersey in 2008