The Michigan Wolverines baseball team represents the University of Michigan in NCAA Division I college baseball. Along with most other Michigan athletic teams, the baseball team participates in the Big Ten Conference. They play their home games at Ray Fisher Stadium.

The Wolverines have made the College World Series seven times, winning two national championships in 1953 and 1962. Michigan is the fourth winningest program in NCAA Division I baseball history, trailing only Fordham, Texas and USC.[2] Prior to the 2013 season, former Maryland head coach Erik Bakich replaced Rich Maloney as the program's head coach. 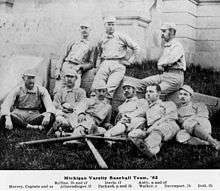 The Wolverines play their home games in Ray Fisher Stadium. The stadium is named after Ray Fisher, who is the winningest coach in Michigan baseball history, with 636 victories and also the 1953 College World Series championship.

Michigan in the NCAA Tournament

Michigan has retired six uniform numbers to date. Below is the detailed list:[4]

1 Never played for the Wolverines. He coached Michigan with a record 636 wins and led the team to 15 Big Ten championships apart from winning the 1953 College World Series.

Big Ten Player of the Year

Big Ten Pitcher of the Year

Big Ten Coach of the Year

The following 34 Michigan Wolverines baseball players and coaches (listed in order of induction) have been inducted into the University of Michigan Athletic Hall of Honor: 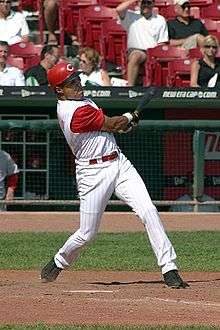