In June 1944, Franklin D. Roosevelt signed the G.I. Bill into law. The demand for higher education increased with the return of soldiers after World War II, and was a major factor in the establishment of a branch of the University of Michigan in the city of Flint.[7]

During February 1947 the Regents of the University of Michigan approved a higher education needs assessment for Flint. In 1949, two Social Science professors at Ann Arbor, Arthur E. Lean and Franklin Killian, recommended a liberal arts college for Flint. C.S. Mott then offered $1 million for a four-year college in Flint. Later, in 1951, the Committee of Flint Citizens requested the Regents establish a four-year college in Flint. In January 1955 Governor Williams signed a $37,000 appropriation bill to cover preliminary expenses for the college; the Mott Foundation provided $1.2 million. Harlan Hatcher, Everett Cummings, and C.S. Mott broke ground for UM-Flint shortly thereafter.

Later, in February 1956, David M. French was named the first dean of the Flint College of the University of Michigan.[7] Flint College opened on the Flint Community Junior College campus.[8] The college's first class graduated in 1958.[6] C.S. Mott would donate a second gift of $1 million for the construction of a new library during March 1959.

From 1963–1964, studies were commissioned to examine the possibility of turning the Flint College into a four-year institution. Then, from March to July 1965, the Michigan State Board of Education recommended a four-year college in Flint and the phasing out of UM's involvement. Public outcry and C.S. Mott's threatening to withdraw millions in pledged support resulted in the state approving the upgrade of the Flint College to a full-fledged four-year branch campus of the University of Michigan—the first such campus located outside of Ann Arbor.

Later, in the Spring of 1970, the North Central Association of Colleges and Secondary Schools granted accreditation to the Flint College of the University of Michigan.

$5 million over five years was pledged towards a new campus in 1972 by the C.S. Mott Foundation.[8] During September 1972, sixteen temporary buildings were erected to ease campus overcrowding, pressuring the Regents to move UM-Flint to its current location along the Flint River.

On Sept. 1, 1973, the Regents passed the plans for the first building by Sedgewick-Sellers & Associates, originally planned for a site at Lapeer Road and Court Street. Instead, the first building was moved to a site on the Flint River, the current campus location. The university acquired the Ross House and the Hubbard Building. Its ground breaking ceremony was held on May 9, 1974 at the Wilson Park bandstand.[8] Two schools were formed at Flint in 1975, the College of Arts and Sciences, the School of Management.[9] In 1977, construction ended on the Class Room Office Building (CROB), later named David M. French Hall, and the Central Energy Plant.[8] In 1979, the original Harrison Street Halo Burger location was vacated to make way for University of Michigan–Flint parking.[10] While, the Harding Mott University Center (UCen) was finished that same year and the Recreation Center in 1982.[11] 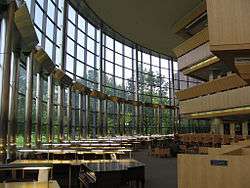 The Frances Willson Thompson Library at the University of Michigan-Flint

William S. Murchie Science Building was completed in 1988.[11] In 1991, UM-Flint took over ownership of the Water Street Pavilion as the University Pavilion[6] keeping restaurants there while moving in administrative offices[11] Northbank Center was acquired in 1998.[11]

In September 1999, Juan E. Mestas began his tenure as the fifth Chancellor of the University of Michigan–Flint.[6] The William S. White Building was completed on the north side of the Flint River in 2002 for School of Health Professions and Studies[11] and the School of Management.[12] Halo Burger returned to the campus in September 2002 only to forced out due to on campus housing food regulations in 2008.[10]

Ruth Person became chancellor in 2008.[13] The first on campus dorms, First Street Residence Hall, were completed in 2008.[11] The University of Michigan–Flint in 2010 was the fastest growing public university in the state of Michigan.[14] The School of Management moved to a leased floor of the Riverfront Residence Hall in early 2013 from the White Building at renovation cost of $5.3 million.[12] In 2013, Person's five-year term was up and was extended for a year by UM President Mary Sue Coleman to 2014.[13]

In August 2014, Sue Borrego began as Chancellor.[15] On October 15, 2015, University Board of Regents approved the purchase of the 160,000-square-foot, 10-story north tower building of the Citizens Banking Buildings from FirstMerit Bank for $6 million expected to close in March 2016.[16] In mid-December 2015, the Uptown Reinvestment Corporation donated the Riverfront Residence Hall and Banquet Center to the university with the Charles Stewart Mott Foundation forgiving the remaining redevelopment loan for the center.[17] The Harrison Street Annex, at Kearsley and Harrison Streets in the Harrison Street parking structure, was being remodeled to be the university's dance studio.[18] On October 20, 2016, the Regents formed the School of Nursing from the Department of Nursing in the School of Health Professions and Studies as .[19] 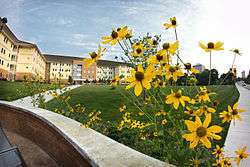 The First Street Residence Hall, a modern building dormitory for students at the University of Michigan, Flint Campus

In November 2004, the Board of Regents of the University of Michigan approved the request of the Flint Campus to explore the feasibility of student housing. After several assessments, studies, and surveys showing the probable progression of growth of the campus, student housing was approved. On July 16, 2007, the first-ever student dormitory, the First Street Residence Hall, opened for students.[20]

In December 2015, Chancellor Susan E. Borrego announced that the Riverfront Residence Hall, a privately owned high-rise building that houses both U of M and Baker College students, had been donated to the University by its owner, Uptown Reinvestment Corporation.[21] The 16-story Residence Hall can house up to 500 students.

The University is home to several fraternities and sororities. The following Greek organizations have chapters on campus:[22]

The Michigan Times is a student-run campus newspaper. In 2008, the Michigan Press Association's "Better College Newspaper Contest" awarded The Michigan Times with nine awards in a statewide competition. This achievement was surpassed in 2009 by winning 23 awards.[24] The newspaper is printed weekly and is available free-of-cost on campus, at other area colleges, in the surrounding downtown area and elsewhere in the Greater Flint area.

UM–Flint does not currently offer varsity intercollegiate athletics, but there are a number of intramural sports leagues and clubs available to students. UM–Flint's sports teams are known as the Kodiaks, but their team colors and uniforms are nearly identical to those of their sister school's varsity team, the Michigan Wolverines. Students, staff and alumni are also able to buy tickets to the flagship campus' sporting events at a discounted price.

The Student Athletic Association, with the assistance of the Club Sports Coordinator, help promote the sports teams on campus.[4][25] These teams include:

The University of Michigan–Flint is rated as one of the best master's-level public universities in the Midwest by US News and World Report.

The Princeton Review has included UM–Flint in the "Best in the Midwest" category in their publication 2014 Best Colleges: Region by Region.[27]

The Part-Time MBA Program is ranked 41st in the United States (overall) and 9th in the Midwest (by region).[28]

The Princeton Review has also included UM–Flint's School of Management in their The Best 301 Business Schools: 2010 Edition.[29]

The Flint campus of the University of Michigan is accredited by the North Central Association of Colleges and Schools,[30] the Association to Advance Collegiate School of Business – International,[31] the Commission on Accreditation in Physical Therapy Education,[32] the Council on Accreditation for Nurse Anesthesia Educational Programs,[33] the Council on Social Work Education,[34] the Joint Review Committee on Education in Radiologic Technology,[35] and the National Association of Schools of Music[36]