Yost Ice Arena (formerly the Fielding H. Yost Field House) is an indoor ice hockey arena located in Ann Arbor, Michigan. It is the home of the University of Michigan varsity ice hockey team which plays in the Big Ten Conference. It has served as home of Michigan hockey since 1973–74.

Built in 1923 as a field house, the facility is named in honor of Michigan's legendary football coach and athletic director, Fielding H. Yost. For many years, it housed the Michigan men's and women's basketball teams, until those teams relocated their sporting events to the larger Crisler Arena in 1967. It also housed the track teams in the 1950s. In 1973, it was converted into an ice arena, and the Michigan hockey team has used it ever since. The University of Michigan's Senior and Collegiate synchronized skating and freestyle teams also practice at Yost. In addition, local high school teams, recreational leagues (AAAHA) and the university's intramural hockey league call it home.

Yost has undergone a number of renovations to modernize its facilities and improve amenities for spectators. In 1992, a $1 million renovation project replaced the rink floor and refrigeration unit and included the installation of a desiccant dehumidification system. A $5.5 million renovation project completed prior to the 1996-97 season brought new dasherboards with tempered glass, improved lighting and sound systems, state-of-the art ceiling insulation, and the replacement of end zone scoreboards with fully automated boards on the east and west sides. First floor remodeling included a new pro shop, modernized concession stands and restrooms, new locker rooms and an improved lobby, complete with trophy showcases and ornate woodwork. Seating throughout the venue was reconfigured and sight lines were improved.[3]

The facility underwent another $1.4 million renovations during the summer of 2001, which created a new balcony directly across from the press box that juts out over existing stands and provides 300 new seats. In the entrance to the new seating level is a lounge that opens up onto a platform in the northeast corner on the arena and overlooks the ice. A new stairwell, new restrooms and a kitchen to serve hot food in the new seating area also were added to improve the amenities for the individuals sitting in the new seats. In addition, a center ice scoreboard and monitors underneath the east and west wing balconies were installed. In the summer of 2006, a $2 million project involved the building of a new opponent locker room. It is situated at the opposite end of the ice from U-M's locker room, making entering and exiting the ice easier for both teams.[4]

The most recent renovation cost the University of Michigan Athletics Department $16 million and was done by Rossetti Architects.[5][6] The renovation began in the spring of 2012 and was completed in September. The renovation included: ADA accessible seating, new aluminum bench seating throughout, "ice" box seats in the corners of the arena, seat backed premium seating, a new press box, a redesigned concourse with improved concessions, exterior windows and updated lighting and sound systems.[7] These upgrades followed the installation of a new HD video board installed in 2011.[8] Yost Ice Arena's seating was reduced from 6,200 to 5,800, though premium seating was expanded from 300 to 500 and total capacity is approximately 6,600.[9]

The Michigan hockey team held a re-dedication ceremony for the newly renovated Yost Ice Arena on November 16, 2012, at their game against Notre Dame.[10] Nearly 80 former players joined the Michigan faithful that night, including Marty Turco and Brendan Morrison. The group took to the ice during the first intermission, where they cut pieces from a net using oversized scissors, while a packed house waved glowsticks.[11] 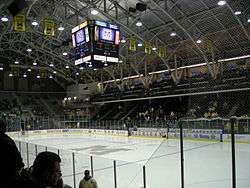