There are more than 500,000 living alumni of the University of Michigan. Notable alumni include the "father of the iPod", the founders of Sun Microsystems and Google, the "father of information theory", the voice of Darth Vader, the 38th President of the United States and the first American to walk in space.

In 2014, the College of Engineering celebrated its 100th anniversary.

A campus plaza was named for McDivitt and White in 1965 to honor their accomplishments on the Gemini IV spacewalk. (At the time of its dedication, the plaza was near the engineering program's facilities, but the College of Engineering has since been moved. The campus plaza honoring them remains.) Two NASA space flights have been crewed entirely by University of Michigan degree-holders: Gemini IV by James McDivitt and Edward White in 1965 and Apollo 15 by Alfred Worden, David Scott (honorary degree) and James Irwin in 1971. The Apollo 15 astronauts left a 45-word plaque on the moon establishing its own chapter of the University of Michigan Alumni Association.[2]

Churchill Scholarships are annual scholarships offered to graduates of participating universities in the United States and Australia, to pursue studies in engineering, mathematics, or other sciences for one year at Churchill College in the University of Cambridge.

2007–2008 Lyric Chen, BA in Political Science and Economics from the University of Michigan, Marshall Scholar 2007

As of 2016, Michigan's Pulitzer matriculants numbered 34 in total. 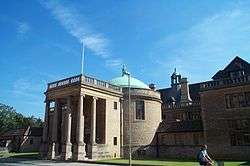 NOTE: The University of Michigan Alumni Directory is no longer printed, as of 2004. To find more recent information on an alumnus, you must log into the Alumni Association website to search their online directory.