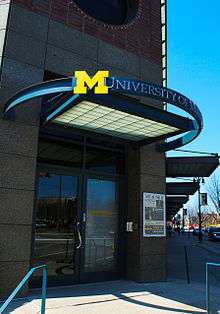 To meet the increasing needs of office space and a facility to host meetings and events in the City of Detroit, the University of Michigan opened the U-M Detroit Center on September 21, 2005. As a home base to University of Michigan faculty, staff and students, the 26,122 sq. ft. facility occupies the ground floor of Orchestra Place on Woodward Avenue, located next to Detroit Symphony Orchestra. The renovated space was laid out and designed by University of Michigan alumnus Bill Grindatti, (B.S.1981; M.Arch.1983), under the guidance of former Taubman College Dean Douglas Kelbaugh. Taubman graduate Mashawnta Armstrong designed the street banners, while Art & Design students Nolan Loh and Mai Truong created the window signage.

The University of Michigan works with a wide variety of Detroit organizations to carry out its various projects, many of which utilize the services and resources of the Detroit Center. As a result, the Detroit Center helps facilitate a symbiotic relationship between the university and local partners to carry out research and community services.[4]

The U-M Detroit Center has developed programming initiatives, which take advantage of University and community resources to provide an impressive array of opportunities for intellectual discourse and cultural enlightenment. Activities are generally free and open to the public. Highlights of these programming initiatives include:

U-M Detroiter Hall of Fame – With the inaugural Hall of Fame class inducted in 2013, this exhibit celebrates the distinguished career achievements of Detroit natives who have graduated from the University of Michigan and made recognized national or global contributions to their disciplines. The 2013 class featured a discussion with inductees and award winning actor David Alan Grier and Pulitzer Prize winning journalist Robin Givhan.

Sounds of the Season – Each December since 2011, Detroit Center offers a seasonal music program and luncheon for community seniors.

Chinese Cultural Arts Programs - With the Confucius Institutes of U-M and Wayne State University, the Detroit Center has hosted and facilitated performances in Detroit featuring the Liaoning University Musical Troupe (2012) and China Conservatory of Music (2013).

Youth Theatre Fellows Program – The Detroit Center conducts a summer theatre camp for high school students. For the 2014 camp, the Detroit Center has secured a commitment to partner with WSU’s Department of Theatre and Dance to assist with the facilitation of design workshops.

Semester in Detroit Speaker Series - The Detroit Center is the co-sponsor of Semester in Detroit lectures and workshops engaging students and community members on contemporary topics including Detroit politics, culture and the economy.

Bridging the University and the City of Detroit: Beyond the programs offered by University units based at the Detroit Center, the staff members have endeavored to involve themselves in projects, which better enable interaction between University and Detroit Communities. A sampling of these initiatives include:

School Partnerships: Detroit School of Arts – Student performers provided entertainment for various events throughout the academic year, such as Noel Night and Sounds of the Season. The Detroit Center sponsored 90 students and chaperones to attend the “Race” exhibit at the University’s Museum of Natural History. The Detroit Center also hosted students at the Detroit Center for: 1) a student Town Hall meeting with Senator Carl Levin, and 2) artist-led workshops related to Detroit 21 – a Work Detroit gallery exhibition. Burton Elementary School – Since 2011, a staff member served as a Reading Corps volunteer for 2 students each year at Burton Elementary School (1 hour per week for the academic year). Plymouth Educational Center – Over a 13-month period, the Detroit Center organized volunteers to re-label, shelve and catalogue books for a K-8 charter school’s formerly dormant library. Various Schools – Detroit Center staff have provided lectures/workshops and coaching of students on an ad hoc basis for K-12 schools in Metro Detroit area.

The MDetroit Center Connector (commonly referred to as the "MDCC" or "Detroit Connector") provides bus transportation between Ann Arbor and Detroit in support of curricular, co-curricular, research, service-learning and community service opportunities for U-M faculty, staff and students (as well as partners involved in a current University initiative based on the Ann Arbor campus). The service began on October 5, 2013 with funding from the Provost Office's Transforming Learning for the Third Century grant.[5] Following a successful trial period, the Provost Office affirmed its support of the system for the 2015 fiscal year by providing funding to operate a four-day schedule, under the auspices of the Detroit Center and an Advisory Board composed of faculty, staff and students.

Upon the public announcement of the MDetroit Center Connector in September 2013, this unique and groundbreaking service made local and regional headlines in digital/print and broadcast news.[6][7][8][9]

In December 2013, a University of Michigan student-made video highlighting the MDCC was featured on Deadline Detroit.[10]

In September 2015, the service was rebranded the "Detroit Connector" in an attempt to connect more broadly between University of Michigan and the City of Detroit.[11]