The Michigan Wolverines field hockey team is the intercollegiate field hockey program representing the University of Michigan. The school competes in the Big Ten Conference in Division I of the National Collegiate Athletic Association (NCAA). The Michigan field hockey team plays its home games at Phyllis Ocker Field on the university campus in Ann Arbor, Michigan. Michigan has won an NCAA Championship as well as eight Big Ten regular season titles and five Big Ten tournaments since the creation of the field hockey program in 1973. The team is currently coached by Marcia Pankratz.

Field hockey has been a varsity sport at the University of Michigan since 1973. From 1978 to 1988 and again from 1992 to the present, Michigan has played in the Big Ten Conference. Between 1989 and 1991, the team played in the Midwestern Collegiate Field Hockey Conference. The team won a number of major championships during the late 1990s and early 2000s, beginning with a Big Ten regular season title in 1997 and a Big Ten tournament championship in 1999. This streak of successes under head coach Marcia Pankratz culminated with the team's first and to date only national championship in 2001.[1] The achievement was the first NCAA title won by a women's sports team at the University of Michigan, and was also just the second time a Midwestern university had claimed the championship after Iowa had done it first in 1986.[5] 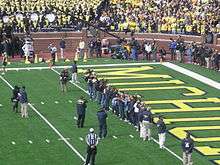 The 2001 national champion Michigan field hockey team honored at Michigan Stadium on the occasion of their 10-year reunion in 2011.

The 2010 Michigan field hockey team in action at Penn State 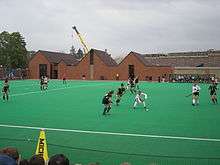 The 2012 Michigan field hockey team in action against Ohio State 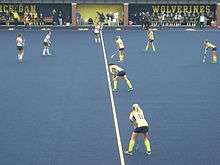 The 2014 Michigan field hockey team in action against Michigan State

Michigan has accumulated a total of 11 appearances in the NCAA tournament, including three Final Fours.[1] In 2001, the Wolverines won their first NCAA championship by defeating Maryland in the final by a score of 2–0. The victory made them the first women's team at the university to win a national championship, as well as the second field hockey team from the Midwest to earn the title, after Iowa in 1986.[5]

Michigan has won eight conference titles, all of them in the Big Ten Conference and all but one under the leadership of head coach Marcia Pankratz.[1] 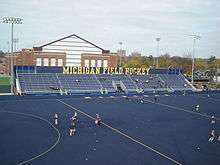 Phyllis Ocker Field before a game in October 2014 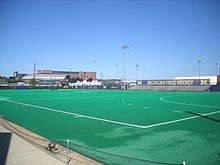 Phyllis Ocker Field as it appeared in August 2013

Michigan has played its home games at Phyllis Ocker Field Hockey Field since its construction in 1995. The field is named after Phyllis Ocker, a former University of Michigan educator, field hockey coach, and athletics administrator. Between the end of the 2013 season and the start of the 2014 season, Ocker Field underwent substantial renovations that included the installation of a blue AstroTurf 12 playing surface and a permanent 1,500-seat grandstand, which tripled the stadium's capacity. These renovations also included the installation of floodlights, a video scoreboard, and a new support building that provides for locker rooms, training facilities, coaches' offices, and meeting space as well as a press box and broadcasting booth. The support building was built on the footprint of the former South Ferry Sports Services Building, which had provided similar accommodations since its construction in 1997. A new spectator plaza that includes restrooms, concession facilities, and ticket and marketing booths was also constructed during the 2013–14 renovations.[3]

Built partially on the site of Regents Field, the home of the Michigan football team between 1893 and 1905, Ocker Field was constructed in 1995 jointly with the Michigan Soccer Field. In 1997, the South Ferry Sports Services Building was constructed adjacent to the field, providing locker rooms, training facilities, and storage space for both the field hockey and women's soccer teams.[9] In 2003, Ocker Field's AstroTurf playing surface was upgraded at the cost of $500,000, a sum that was raised from donations from friends and alumni of the field hockey program.[3] Between the 2003 and 2013–14 renovations, the stadium had a seating capacity of 500.[9] In 2010, both the men's and women's soccer teams left the Michigan Soccer Field for the new U-M Soccer Stadium, and football practice fields outside Al Glick Field House have since been built adjacent to Ocker Field.[10][11] Before the construction of Ocker Field, the Michigan field hockey team had played at four other venues on campus: Michigan Stadium (1973–75), Ferry Field (1976–86), the Tartan Turf (1987–90), and Oosterbaan Fieldhouse (1991–94).[9]