This article is about the public radio network. For the commercial radio network in Michigan, see Michigan Radio Network. 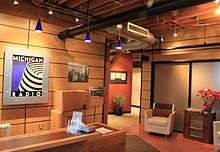 Michigan Radio is a network of three public radio stations (WUOM, WFUM, and WVGR) operated by the University of Michigan through its broadcasting arm, Michigan Public Media. The station is a founding member of National Public Radio and an affiliate of Public Radio International and American Public Media. Its main studio is located in Ann Arbor, with satellite studios in Flint and offices in Grand Rapids.

The stations are known as Michigan Radio: Your NPR News Station. The network currently airs NPR news and talk, which it has since July 1, 1996. All three stations broadcast in HD Radio, although there are currently no HD subchannels.

Combined, the three stations of Michigan Radio cover most of the southern two-thirds of the Lower Peninsula.

Before the university had applied for its own radio station, the University of Michigan Extension Service Bureau of Broadcasting produced programs for other stations starting the 1920s. For instance, in November 1944, the Bureau of Broadcasting produced "Stump the Professor" for WJR in Detroit and "The Balkan States: Places and Nations in the News" for WKAR in East Lansing.

In the early 1940s, the University of Michigan applied for an AM radio station. The Federal Communications Commission (FCC) turned down the application because there were not any available frequencies at the time. (WPAG, now WTKA, would become Ann Arbor's first radio station in 1945.) Around this time the university began working on plans for a statewide network of four FM stations to be located in Ann Arbor, Mount Pleasant, Manistique and Houghton. The university applied to the FCC on September 11, 1944 for a station at 43.1 FM (part of a band of frequencies used for testing of Frequency Modulation) with a power of 50,000 watts; by 1947, the new station was given the call letters WATX and was assigned to 42.1 FM. (At the time, a station on the new FM band was seen as being at a significant disadvantage.)[1]

The FCC granted a license for WUOM (for University Of Michigan) at 91.7 in the brand new FM band; the station went on the air in 1948, broadcasting from studios in Angell Hall on the UM campus. In 1949 the station moved across the street to newly completed studios on the fifth floor of the Administration Building, now known as the Literature, Science & Arts Building. Michigan Radio remained in those studios until August 23, 2003, when it moved off campus to the Argus Building on Ann Arbor's Old West Side. Its signal covers most of the southeastern and central Lower Peninsula, from Lansing to Detroit. The station provides 24-hour NPR news service to the state capital for listeners without HD Radio sets. Lansing's main NPR news member, WKAR-AM, must sign off at sundown and WKAR-FM airs the Classical 24 network from 7 pm to 5 am weeknights with minimal if any interruption for news. While an NPR news and talk station is available on WKAR-FM's HD subcarrier, this still leaves conventional radio listeners out in the cold.

WFUM (for Flint University of Michigan) has been on the air at its current 91.1 frequency since August 23, 1985 when it first signed on as WFUM-FM. The original WFUM operated at 107.1 MHz during the 1950s and was also a simulcast of WUOM. WFUM (FM) was shut down after WUOM increased its power to 115,000 watts, giving it adequate coverage of Flint and meaning that WFUM, which operated with only 400 watts of power, was no longer necessary. WUOM has since reduced its power to 93,000 watts, but still can be heard with a fair signal in Flint. WFUM today operates with 17,500 watts of power. Its signal reaches the immediate area around Flint primarily but also can be heard in far northern parts of the Detroit metro area on selective radios. The current incarnation used the "-FM" extension because the WFUM callsign was also assigned to the University of Michigan's television station in Flint when the station first signed on, WFUM (TV). In 2009, the TV station was sold to Central Michigan University and the call letters changed to WCMZ-TV, so WFUM-FM adopted the simplified call letters WFUM.[2]

WVGR (Vogt Grand Rapids, after Fred Vogt, who led the campaign for public radio in the area) has been broadcasting since December 7, 1961. It covers West Michigan with a powerful 96,000-watt signal. WVGR had long operated at 108,000 watts from rented space on NBC affiliate WOOD-TV's tower, but had to move in 1999 because WOOD needed the space for its HDTV transmitter. It temporarily moved to CBS affiliate WWMT's tower while it raised money for a new tower of its own. WVGR was forced to downgrade to a mono signal at 20,000 watts, but resumed broadcasting from its own tower in the fall of 2006.[3]

WUOM quickly established itself as one of the leading educational broadcasters. Because the station was not affiliated with any of the commercial radio networks, it produced nearly all the programs it broadcast in the early days. The program guide for October, 1949 shows the station on the air from 12:00pm–10:00pm on weekdays (the station had just expanded into evenings), with a few hours of programs on Saturday and Sunday. The programs listed in the 1949 guide include "From the Classrooms," "Songs of France," "Tell Me, Professor," "Especially for Women," "Around the Town," "Record Rarities," "Hymns of Freedom," "Angell Hall Playhouse," and "Tea-Time Tunes." The station also offered live play-by-play of Michigan football games that month, as well as two live concerts from Hill Auditorium - recitals featuring University of Michigan faculty. Some of the programs featured recorded music, but nearly all programs were performed live to air in the first days. By the early 1950s many of these shows were being transcribed and sent to other stations.

WUOM's popularity gradually decreased from the height of the 1960s, though it still retained enough prestige to become a charter member of NPR in 1971. It was one of the approximately 90 stations that aired the inaugural broadcast of All Things Considered. However, by the early 1990s, Michigan Radio (as it has been known since 1989) was seen by some as a neglected backwater. One important cause of the decline was that the Corporation for Public Broadcasting, created in 1967, tended to divert funding away from university owned stations to stations in large urban areas. Another cause of WUOM's decline may be that radio listening patterns changed, and listeners had new expectations. WUOM, while making some changes to accommodate the new realities of broadcasting, clung to its previously successful 1960s model for program production, which included primarily music and host presentation.

As a result of reduced popularity, the station faced declining audience and contributions throughout the 1980s and early 1990s. In 1995 the CPB informed the station that its audience was so small that its federal funding was in jeopardy. Around the same time, the University of Michigan commissioned a private study that recommended the university divest itself of the radio stations. The university decided against that plan and instead made one last attempt to resuscitate the station.

Donovan Reynolds became the manager of Michigan Radio in 1995. He determined that the only way to save the stations was to execute a marked broadcasting departure from the past with a focus on programs that listeners most enjoyed. Reynolds changed the format to News/Talk on July 1, 1996. Although a few public radio stations had a news/talk format in 1996, most were on AM. Classical music was still offered, but only during evenings, overnight and on weekends. The classical music programs were phased out in July 2000, but continued to be streamed on the Internet from the station's website until 2004. Some classical music fans were initially unhappy with the changes, especially due to the recent closure of a Detroit commercial classical station, WQRS-FM, in 1997. However, the format has been extremely successful in terms of attracting new listeners and therefore listener donations.

Michigan Radio's transformation to a news/talk format coincided with NPR's offering of a new package of programs to span the gap between Morning Edition and All Things Considered. These new programs included the Diane Rehm Show, The Derek McGinty Show, and others, and Michigan Radio was the first station to sign up to offer this package to its listeners.

As a public radio pioneer in the news/talk format on FM, Michigan Radio may have helped influence similar transitions to that format by stations including WUNC in Chapel Hill, NC, WBUR-FM in Boston, WAMU in Washington, DC, KPCC in Pasadena, CA, WHYY-FM in Philadelphia and WBEZ in Chicago. For several years after 1996, Michigan Radio's rise was a case study in the public radio industry, and its success still fuels change elsewhere, including in Iowa, where the Bornstein and Associates Report on Iowa Public Radio consolidation devotes a chapter to studying Michigan Radio's format change.

Michigan Radio provides a variety of programs from NPR, Public Radio International and American Public Media. In addition, Michigan Radio broadcasts the BBC World Service as distributed by PRI during the late night and early morning hours. In 2014, the station created its daily, locally produced talk show, Stateside which covers a wide range of Michigan news and policy issues — as well as culture and lifestyle stories. Stateside is hosted by Cynthia Canty (Mon-Thu) and Lester Graham (Fri). The program airs live weekdays 3-4pm, with encore playback at 10pm weeknights.

Michigan Radio receives the largest portion of its funding from listener contributions (55% in 2014). These contributions are solicited during two annual fund drives.

The second largest revenue source for Michigan Radio is underwriting contributions (19%) with the corporate support sponsor typically receiving on-air mentions in return. The Corporation for Public Broadcasting provides $465,000 or about 6%. As of 2014, The University of Michigan no longer provides direct financial support, although they do provide $305,000 in indirect administrative support or about 4% of the funding.[4]