"The Victors", and also called "Hail to the Victors",[1] is the fight song of the University of Michigan (UM) composed by UM student Louis Elbel in 1898. The song was first played publicly by John Philip Sousa and his band.

An abbreviated version of the fight song, based on the final refrain, is played after the football team either scores or makes a decisive defense play, such as an interception. Its full lyrics span several verses that run of more than two minute duration. The melody of the fight song is very similar to the trio section from "The Spirit of Liberty March", published seven months earlier by Tin Pan Alley composer George "Rosey" Rosenberg.

The phrase "champions of the West" is often misunderstood; it is a reference to Michigan's membership in the Western Conference, later renamed the Big Ten. After Michigan temporarily withdrew from the Western Conference in 1907, a new Michigan fight song "Varsity" was written in 1911 because the line "champions of the West" was no longer relevant.

The Victors is considered one of the top fight songs ever written and considered the first significant fight song to be written. The fight song is written as a military march format.[2]

Previously, the song "There'll Be a Hot Time in the Old Town Tonight" was perceived as the school's fight song.[3] "The Victors" was composed by UM student Louis Elbel in 1898 following the last-minute victory over the University of Chicago that clinched a Western Conference championship on Thanksgiving in Chicago.[4][5] Singing "There'll Be a Hot Time in the Old Town Tonight" after the game, Elbel felt the event should be "dignified by something more elevating for this was no ordinary victory."[5] Elbel wrote the full song out on the train ride back to Ann Arbor.[2] Elbel copyrighted the tune in early 1899.[6] Elbel and a student orchestra played the first public performance on April 5, 1899 during A Night Off on-campus undergraduate musical with the audience requesting an encore.[2] Elbel had the words arranged and approached John Philip Sousa. Officially, the University held that the song was first performed in public on April 8, 1899 by Sousa and his band. Sousa is said to have called The Victors, "the greatest college fight song ever written".[2][5]

After Michigan temporarily withdrew from the Western Conference in 1907, a new Michigan fight song "Varsity" was written in 1911 because the line "champions of the West" was no longer appropriate.[7] Both songs were highly popular, and with Michigan's reentry to the Western Conference in 1917, followed by an undefeated football season in 1918,[8] the lyrics to The Victors became apt once again.

During World War I, both German and French military bands played the song. The USA 125th Infantry Band played the song in 1918 as Michigan troops entered captured Germany.[2] In the 1920s, an alternative lyrics were penned by an unknown author.[2]

Elbel returned for Michigan's Homecoming yearly to lead the band in playing The Victors until hid death in 1959. In 1961, the Michigan Marching Band went on a world tour in 31 countries with The Victors as a selection played.[2]

Controversy arose over where or not Elbel swiped the song or not. In 1983, U-M Marching Band alumnus George Anderson found that the song's trio was nearly the same as "The Spirit of Liberty March", which was copyright in 1898. Jim Henriksen, another band alumnus, wrote "The Authorship of The Victors March" paper covering the various theories about the similarities indicating that none would be proved to be true. U-M Band Alumni past president Joseph Dobos considered Elbel the only author, which received support from Bill Studwell, author of "College Fight Songs: An Annotated Anthology", as many composers borrowed from each other. Dobos also wrote the "Did Louis Elbel Write The Victors?" essay for the Band Alumni publication M-Fanfare fall 2007 issue indicating that Victors was more "tightly composed" than Spirit and was a "circus" march while Spirit was a "two step".[6]

John Kryk found the alternative lyrics in a University of Michigan Athletic file doing research for a book published in 2004.[2]

The University started using a softer version in its TV commercials for U-M Health System starting in 2008.[6] The University's Flint branch campus selected "The Victors" as their sports nickname in an unofficial student vote in 2008.[9][10][11] The Bleacher Report named the song the number one college fight song in 2011.[1] In 2014, the USA Today College Football Fan Index named "The Victors" the number fight song,[5] but fell to third place in 2015.[12] While in 2015, NFL.com named it number two on its top 15 of college fight songs.[13] 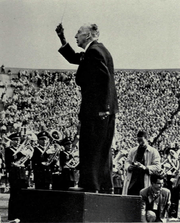 Louis Elbel conducting the Michigan Marching Band in "The Victors," 1958

Various versions of the song are used at UM functions, including three versions the marching band often plays at football games, a calypso version named "The Calyptors", a Dixieland version titled the "Hoover Street Rag", named after the band's home, Revelli Hall on E. Hoover Ave., and "El Victors Caliente", a Latin arrangement by previous director Scott Boerma. The chorus of the song ("Hail! to the victors valiant," etc.) is played at all University of Michigan sports competitions, as well as many UM band events, first year student orientation and welcoming events, and graduation commencement ceremonies. Many attendees will stand when it is played sing along and clap in rhythm until the chorus when attendees include at each repetition of the word "Hail!" a thrusting in the air of fists. The fist raising has become well accepted as an indication of school spirit. Attendees at sport events have started to yell the phrase "Go Blue!" at the conclusion of the chorus. Attendees at hockey games, have commonly insert "Let's Go Blue!" between the two stanzas of the chorus after "leaders and best" and then is to conclude with "Go Blue!" When hockey games started play at Yost Ice Arena attendees have begun adopting the abbreviated football game version but continue to include "Let's Go Blue!" and conclude with "Go Blue!".

The popularity of UM athletics and "The Victors" have prompted the song being used by the University of Michigan in its advertising. Commercials for the University of Michigan Health System's "The Michigan Difference" campaign have featured the words to the chorus of "The Victors" over pictures of children in hospital beds, amputees and post-surgical patients living active lives, and doctors performing surgery. The musical accompaniment to these commercials is a light chamber orchestra/pop rendition of the fight song.[14]

UM alumnus Gerald R. Ford, the 38th President of the United States, often had the Naval band play the fight song prior to state events instead of "Hail to the Chief".[15] He also selected the song to be played during his December 2006 funeral procession at the U.S. Capitol.[16] The Michigan Marching Band played this tune for him one final time, for his last ride from the Gerald R. Ford International Airport in Grand Rapids, Michigan.

Now for a cheer they are here, triumphant!

Here they come with banners flying,

In stalwart step they're nighing,

With shouts of vict'ry crying,

We hurrah, hurrah, we greet you now,

Far we their praises sing

For the glory and fame they've bro't us

Loud let the bells them ring

For here they come with banners flying

Far we their praises tell

For the glory and fame they've bro't us

Loud let the bells them ring

For here they come with banners flying

the leaders and best

the champions of the West!

We cheer them again

We cheer and cheer again

the champions of the West!