University of Michigan College of Engineering

The University of Michigan College of Engineering is the engineering unit of the University of Michigan in Ann Arbor. With an enrollment of 5,819 undergraduate and 3,157 graduate students,[2] the College of Engineering is one of the premier engineering schools in the United States. In various ranking systems, the college is frequently ranked as one of the top ten engineering schools in the nation and among the top 15 schools in the world.[3] The median SAT combined verbal and math score for the incoming class of 2015 was 1450, while the median ACT was a 33.[1] Between the years 1999-2009, Michigan was ranked 5th globally for papers published and academic citations.

The college was first located on the University's Central Campus before moving to the University's North Campus — which occupies approximately 800 acres (3.25 km²)— starting in the late 1940s. Today, the College of Engineering is prominently located in the center of the University's North Campus (the Marine Hydrodynamics Laboratory is located on Central Campus), which is shared with the School of Music, Theatre and Dance, School of Art and Design, and the Taubman College of Architecture and Urban Planning. The North Campus also houses Lurie Tower, one of 2 grand carillons on the Ann Arbor campus, and one of only 23 in the world. Dr. Alec D. Gallimore currently holds the position of Robert J. Vlasic Dean of Engineering.[4] 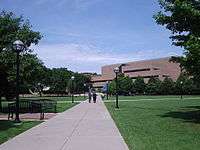 The North Campus Diag, looking towards (from right to left) the EECS Building, G.G. Brown, and H. H. Dow Building (hidden by trees)

The college grants degrees at the Bachelor's, Master's, and PhD levels. The 14 undergraduate degree programs offered by the college are:

Almost all of these programs are ranked in the top ten in the United States according to US News and World Report.[5]

Various laboratories are located at the college of engineering, including the Center for Wireless Integrated MicroSystems (WIMS) and the Center for Reconfigurable Manufacturing Systems (RMS), both of which are NSF laboratories. Another major laboratory is the Center for Ultra-Fast Optical Sciences. The Phoenix Memorial Laboratory is a laboratory dedicated to research into the peaceful use of nuclear technology. It once housed the Ford nuclear reactor, which has been decommissioned.

The College of Engineering also has 11 wind tunnels, electron microscope and ion beam laboratories, a civil engineering test facility, and solid state manufacturing facilities. Various laboratories dedicated to automotive engineering, neutron science, optical sciences, and robotics are scattered throughout the college. A hydrodynamics laboratory is located on the University's Central Campus. An office of the Weather Underground is located at the College of Engineering.

The Duderstadt Center, formerly the Media Union and affectionately known as "The Dude" by engineering students, is named after former University president and nuclear engineering professor James Duderstadt. It houses the Art, Architecture & Engineering Library and also contains computer clusters, audio and video editing laboratories, galleries, and studios, as well as usability and various digital media laboratories, including virtual reality. The Millennium Project, which focuses on the future of the university learning environment, is also housed in the Duderstadt Center.

Computer services and networking is provided by CAEN, the Computer Aided Engineering Network. CAEN operates various computer laboratories throughout the College of Engineering and the University campuses. It also operates the college's wireless network (with VPN and web-based authentication) and runs daily backups for College of Engineering servers. As of 2007, CAEN no longer maintains separate mail servers for CoE students and faculty.

The University of Michigan, partnering with the Michigan Department of Transportation, opened a 32-acre proving ground test course for autonomous cars in 2015 called Mcity on the site of a former Pfizer facility which the University purchased in 2009. Mcity contains five miles of roads and includes a mock town square, tunnel, highway exit ramps, a railroad crossing, gravel roadway, traffic circle, roundabout, and other obstacles. Faculty and engineering students will utilize Mcity to work on projects and to collaborate with automakers and suppliers who will test vehicle technology at the course.[6]

College of Engineering students are required to understand and adhere to an Honor Code[7] governing the completion of classwork and examinations, as well as conduct when using CAEN computers. If a student observes a violation of the Honor Code, he or she is required by the Honor Code to report it.

During examinations, the College of Engineering differs from other University of Michigan academic units in that the instructor is typically not present in the room (i.e., the exam is not proctored). The instructor will tell the students where he or she will be during the examination, such as in his or her office or sitting in the hallway, in case there are questions. Students are guaranteed at least one empty seat between him or her and the next closest person. Minimal conversation is allowed, given that it does not concern the content of the examination. Students can also leave and re-enter the room without permission.

The following Honor Pledge, or a variation of it, must be written and signed on an exam (or occasionally other assignments) before it will be graded: "I have neither given nor received any unauthorized aid on this (exam/assignment/etc.), nor have I concealed any violations of the Honor Code."

All assignments, whether submitted in writing or electronically, for a lecture or laboratory class, must be the product of the student's own work, unless collaboration is specifically allowed by the instructor. If collaboration is allowed, the instructor will specify the degree to which it is allowed. In addition, all sources of ideas as well as direct quotations must be cited.

Tampering with CAEN computers or attempting to illegally copy licensed software from them is also considered a violation of the Honor Code.

Honor Council records are confidential and not placed in the student's regular file.

There are student branches of various professional organizations such as AIAA, IEEE and ASME, minority groups such as SWE, NSBE and oStem as well as honor societies such as Tau Beta Pi and Epeians, the Engineering Leadership Honor Society at Michigan.[8] Most are housed in Pierpont Commons (the student union on North Campus) or in "The Bullpen" in the Electrical Engineering and Computer Science (EECS) building. Engineering Student Government (ESG), represents the student body of the College of Engineering, also has an office in the EECS building.

The Michigan Baja Racing team is among the top performing teams nationally. In 2013, the team placed first overall in season points, including two first-place finishes in the four-hour endurance race - the highlight and main focus of each competition. In 2014, the team placed a close second overall in the season, and in 2015, the team placed first again overall in season points. The 2015 season included two out of three competition wins, with three podium finishes including one win in the design event. The 2015 car continued to push the boundaries of the team from a design perspective, including an axially-stressed drive shaft, custom brake calipers, and custom CVT flyweights that gave the team a significant competitive advantage. The 2016 season brings the team to Tennessee, California, and New York. Michigan Baja Racing

Additionally, over 1/3 of the Michigan Marching Band consists of Michigan Engineers.

The SWE/TBP Career Fair is an engineering career fair held each fall as a collaboration between the University of Michigan Student Section of the Society of Women Engineers and the Michigan Gamma chapter of Tau Beta Pi. The event began in 1986[10] and has grown to be one of the largest student-run career fairs in the country, hosting nearly 300 companies each year.[11]