Takadanobaba Station (高田馬場駅, Takadanobaba-eki) is a railway station in the Takadanobaba area of Tokyo's Shinjuku ward, situated between the commercial districts of Ikebukuro and Shinjuku.

Takadanobaba Station is served by the following lines.

The Yamanote Line island platform and two Seibu Shinjuku Line platforms are located parallel to each other, and are connected by an overhead transfer concourse, as well as transfer gates at ground level by the main Waseda exit. 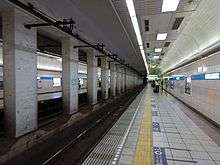 Seibu Railway opened a temporary station perpendicular to the Yamanote Line in April 1927, followed by a permanent station parallel to the Yamanote Line in April 1928. The original station buildings were burned to the ground during the bombing of Tokyo in April 1945. Takadanobaba was the Tokyo terminal of the Seibu Railway Murayama Line (now Seibu Shinjuku Line) until it was extended to Seibu-Shinjuku Station in 1952.

The Tozai Line began service to Takadanobaba in December 1964 under the auspices of the Teito Rapid Transit Authority. Takadanobaba was the western terminus of the Tozai Line until the connection to Nakano Station and the Chuo Main Line opened in March 1966.

Station numbering was introduced on all Seibu Railway lines during fiscal 2012, with Takadanobaba Station becoming "SS02".[4]

The surrounding area of Takadanobaba is often referred to as "Baba". It lacks the history of nearby Waseda and Mejiro, often conjuring up images of a student spot with its many cheap bars and izakaya serving the needs of students at nearby Waseda and Gakushuin universities. Numerous prep and vocational schools reinforce this image in the eyes of many Japanese.

The symbol of Takadanobaba is the monolithic and appropriately named Big Box building next to the station. Big Box houses a sports gym, swimming pool, Uniqlo clothing store, cafe, bowling alley, arcade, and a fast food restaurant. It has recently been reopened after an extensive renovation.

Daily average passenger figures for each operator are as shown below.