Not to be confused with Nykøbing Falster or Nykøbing Sjælland. 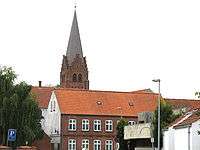 Nykøbing Mors is the largest town on the Danish Limfjord island of Mors. The town received its charter in 1299 and has a population of 9,031 (1 January 2014).[1] It is located in Morsø municipality and belongs to Region Nordjylland.

Nykøbing was the place of birth of Danish-Norwegian author Aksel Sandemose and the reputed inspiration for the fictional town of Jante, associated with the Jante Law, in Sandemose's novel A Fugitive Crosses His Tracks.

Kirstine Smith, statistician and creator of optimal design of experiments, was also born in Nykøbing.

Nykøbing was the seat of the former Dueholm monastery, now part of the Morsland Historical Museum. Located just outside the village on a spit is Nykøbing Mors Cricket Club Ground. The ground has in the past held Women's One Day Internationals, including matches for the now defunct Denmark women's team.[2]

This article is a translation of the corresponding article on the Danish Wikipedia, accessed on 25 April 2007.